Sony Pictures // Unrated // August 7, 2012
List Price: $38.99 [Buy now and save at Amazon]
Review by Stuart Galbraith IV | posted January 16, 2013 | E-mail the Author
Sincere but not engrossing, Born Free (1974) was a short-lived television series adapted from the popular 1966 movie, a drama about real-life African wildlife conservationists Joy and George Adamson. The series undoubtedly must have seemed like a great concept on paper but in execution just doesn't work. Unlike the movie, in attempting to dramatize real issues of poaching and rescuing ill and injured wild animals the TV version somehow lacks the educational, intellectual and emotional virtues of the movie. I kept thinking I'd rather instead watch a documentary photographing the real thing instead of this sanitized recreation trapped in contrived jungle movie plotlines.

Adding to the disappointment is Sony's unusually poor video transfers of Born Free - The Complete Series. Though almost invariably the old movies, even lowly second features, from Sony's "Choice Collection" manufactured-on-demand DVDs look great, their deep catalog TV titles have been another story. It could be that different departments handle the TV library, or that maybe even with a higher SRP the cost of remastering 10 ½ hours of Born Free isn't financially justified versus a 75-minute movie. In any case this appears to source transfers 20 years old or more. (The old Columbia Pictures Television logo even appears at the end of each episode.) This lack of care is reflected in the packaging. Usually these things come with some kind of episode guide or at least episode titles on the discs, but not here. 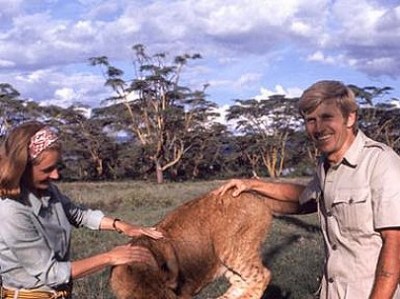 The original movie was a mostly British production filmed primarily in Kenya. Based on Joy Adamson's book, it recreated their experiences raising three lion cubs, particularly Elsa the Lioness, whom they eventually successfully released back into the wild. An extremely well cast Virginia McKenna and Bill Travers played the Adamsons. Not only did they resemble the couple physically, they themselves were married to one another, adding additional verisimilitude. Further, the making of Born Free in Kenya likewise proved a life-changing experience for the two actors, who became ardent animal rights activists and later established the Born Free Foundation, though they declined to appear in the later films and TV show.

The movie of Born Free was a big hit, arguably eclipsed by its hugely popular score and title song by composer John Barry. More books by the Adamsons followed, as well as a documentary entitled The Lions Are Free (1969), and a sequel to the 1966 movie, Living Free (1972). (Susan Hampshire and Nigel Davenport starred in that film.)

The 1974 television series stars Diana Muldaur and Gary Collins as Joy and George. The series was created by Carl Foreman, the screen- and co-screenwriter of such movies as High Noon (1952), Bridge on the River Kwai (1957), and The Guns of Navarone who had been blacklisted and spent most of the 1950s and '60s in Europe. He's listed as the "Presenter" of the 1966 movie of Born Free but it's not clear if Foreman actively co-produced it or if his production company merely helped finance its completion and/or distribution. Born Free's screenplay adaptation was by another Blacklist victim, Lester Cole, who was one of the Hollywood Ten and even as late as 1966 could only be credited under a pseudonym, "Gerald L.C. Copley." In any case both Living Free and the TV show credit only Foreman.

The TV series walks the same fine line as the 1966 movie: avoiding, not always successfully, sentiment and projecting human emotions and behavior on the sometimes cuddly but emphatically wild animals. Also in trying to be realistic, its storylines come off as rather mild, like tame Tarzan episodes minus Tarzan. Episode titles like "Elephant Trouble," "A Matter of Survival," "The Trespassers," and "The White Rhino" pretty much give the plots away.

Like the movie the TV series was filmed in Kenya and under the supervision of Joy Adamson. Ironically, by the time TV series was filmed Joy and George had been separated for several years, though they remained married until Joy's stabbing murder in 1980. (George himself was also murdered, shot to death, 1989 by Somali poachers while rushing to the aid of a tourist. Not a happy ending, this.)

As a result, the series is further limited by the awkward relationship between Joy and George. I didn't watch the entire series for this review, but in the episodes I saw the couple share no intimate romantic moments but rather treat one another more as colleagues. Foreman obviously felt obliged to feature Elsa the Lioness on the show, though she rarely figures into the plots. The real Elsa died in of a tick-borne blood disease January 1961, long before even the movie.

The series was not a success. It's competition, The Rookies on ABC and Gunsmoke on CBS, weren't Top 10 hits, but popular enough to rout Born Free in the ratings, and the show was cancelled after just 13 episodes.

Hal Frederick (as Makedde) and Peter Lukoye (as Nuru) are featured. Guest stars include Peter Lawford, Susan Dey, Dan O'Herlihy, Juliet Mills, Alex Cord, and Barbara Parkins. Juliet Mills is also listed on the IMDb as appearing in the pilot episode alongside Guest Star Peter Lawford, but she's nowhere in the credits and I didn't notice her otherwise.

Born Free's thirteen episodes are spread across three Region 1 encoded DVD-Rs. The transfers look quite old, lacking in detail, sourcing dirty film elements, with blotchy, unimpressive color. Considering the show was filmed entirely on location in Africa, the benefits of a new transfer would seem obvious, but the cost versus the consumer demand for a nearly forgotten show like this is likely prohibitive. (The fact that it lasted just 13 shows also doomed any chance of it finding a new audience via syndication.) The mono audio, English only with no other choices and no subtitle options, is adequate. Sony obviously didn't put much time into this release. Besides not bothering even to list episode titles on the discs, menu screens don't even utilize an image from the series, but rather a strangely spooky image of a pile of discarded televisions. No Extra Features.

I was looking forward to perhaps watching Born Free with my five-year-old daughter but the poor video transfers put me off, and the show, while well-intentioned, isn't all that interesting, either. Rent It.