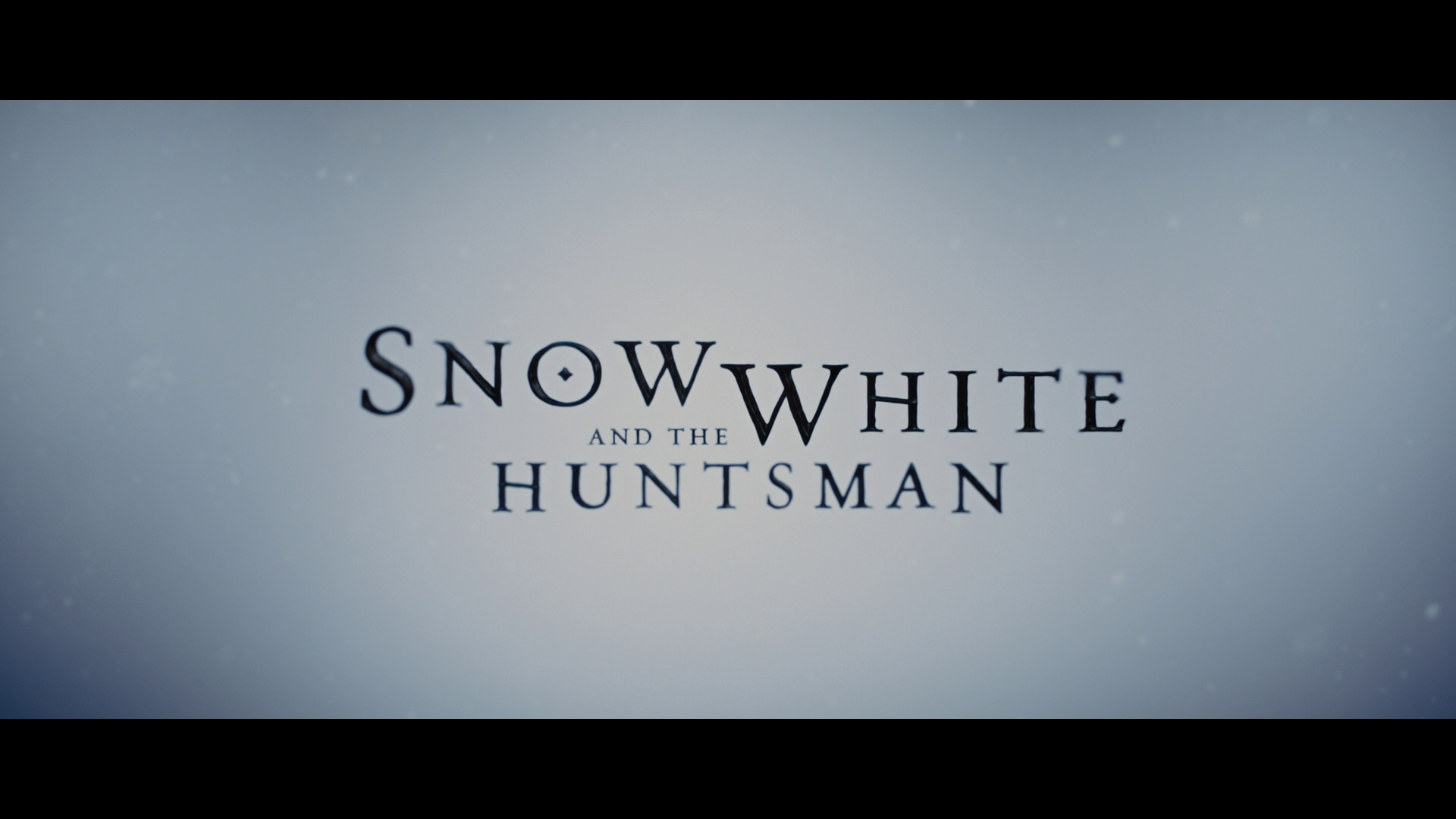 Director Rupert Sanders' visually arresting take on the German fairytale "Snow White" is successful in large part because of Charlize Theron, summer 2012's resident ice queen, who acts up a severe storm as the film's villainous Queen Ravenna. Kristen Stewart is a fair-skinned Snow White of few words, and her protector, the hulking Huntsman, played by Chris Hemsworth, is similarly short of words. Snow White and the Huntsman sees Ravenna ravage a once beautiful kingdom to remain young and beautiful, and Snow White escapes to the dark forest after years of imprisonment only to be pursued by the Huntsman. Although the film temporarily slows to a grind at its halfway point, there is much to admire in Snow White and the Huntsman, and Sanders argues a compelling case for revisiting the oft-told story. 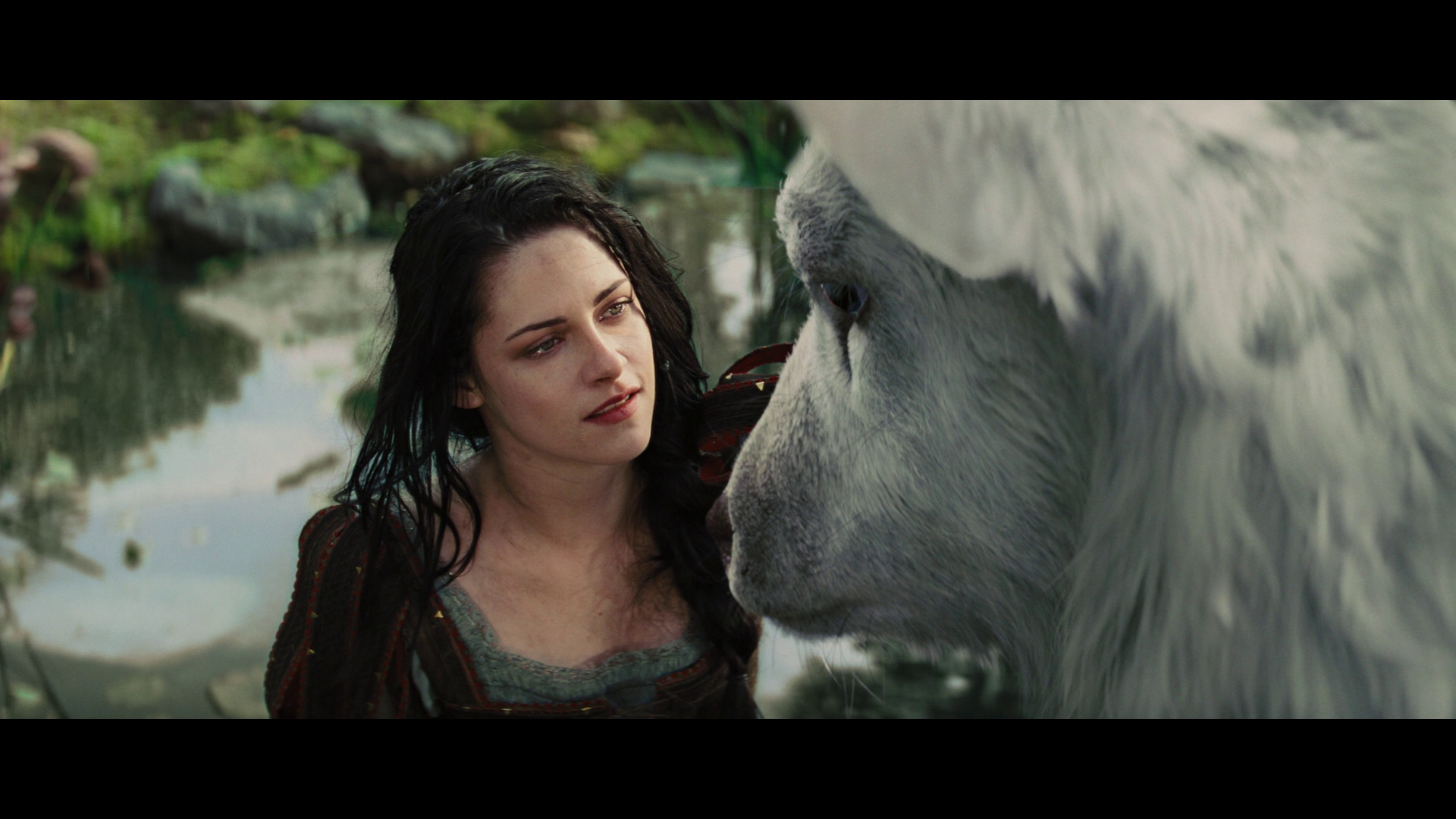 Snow White's father, King Magnus (Noah Huntley), goes to war shortly after the death of his wife, and discovers a beautiful women locked in a carriage, seemingly the prisoner of his attackers. Magnus marries this woman, Ravenna, the next day, and she soon drives a dragger through his heart, whispering in his dying ear her contempt for men who use women. Ravenna is blessed - or cursed - with the ability to drain the life out of others to remain young and beautiful, and she cruelly rules the kingdom with the help of her bumbling brother, Finn (Sam Spruell). Years later, Ravenna's mirror on the wall informs her that she is no longer the fairest in Tabor - Snow White has come of age - but if she takes the heart of Snow White, Ravenna will remain beautiful forever. Before she can do so, Snow White escapes her prison tower, and Ravenna bribes the drunken, grieving Huntsman into tracking her down. 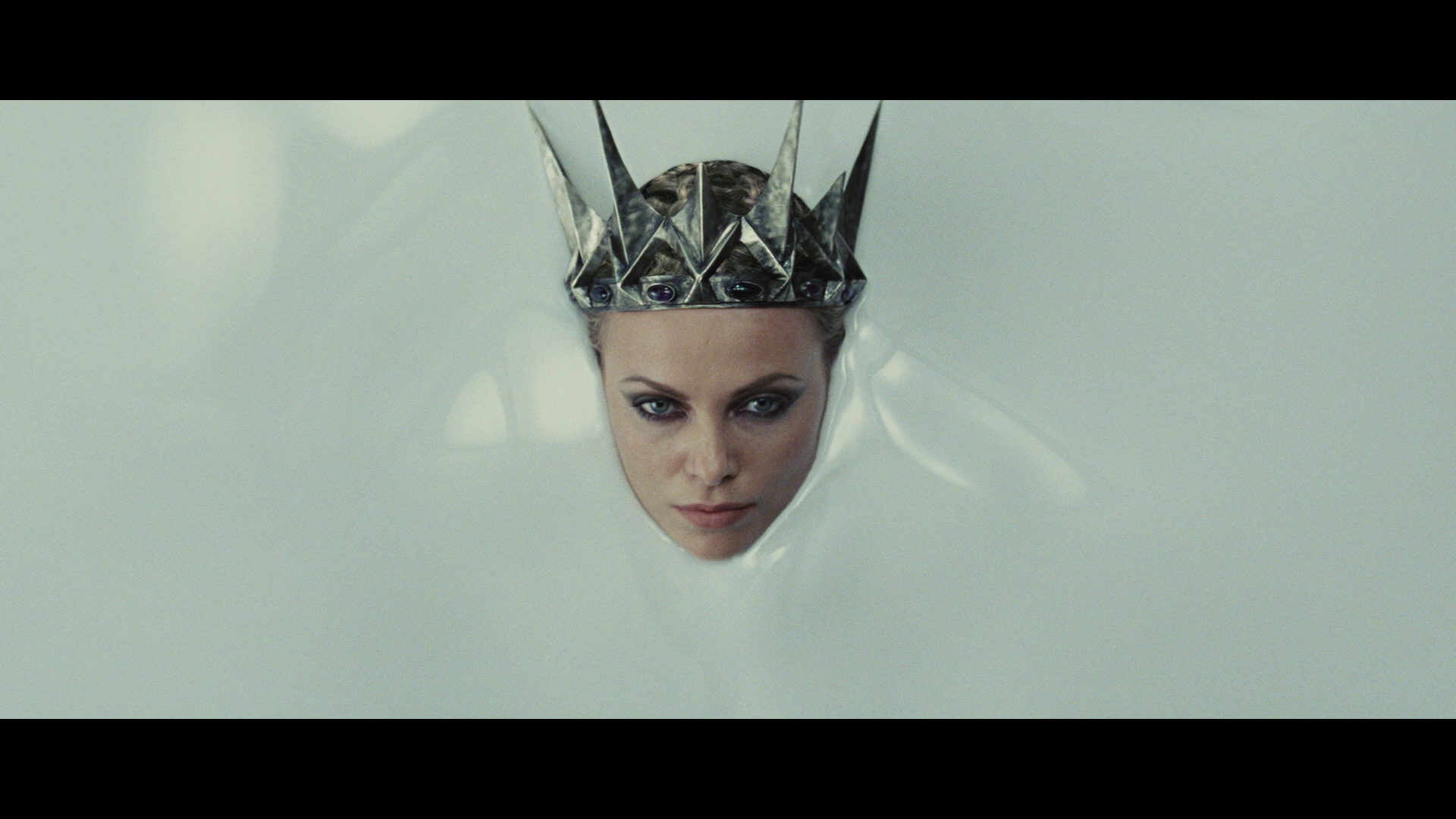 Sanders, who makes his directorial debut here but has worked on numerous commercials for products like videogame "Halo" and Absolut vodka, has a keen eye for staging and visual effects, and Snow White and the Huntsman is a handsome, accomplished product. The action moves from Ravenna's decaying castle to the hallucinogenic dark forest to a fairy sanctuary immune from Ravenna's poison. The film may be telling a fairytale, but it does so in a realistic way outside the use of magic and fantasy creatures. Sanders incorporates elements from the fairytale in unique ways. The queen's mirror is a gilded, anthropomorphic catalyst to her fury, and Sanders uses visual effects to transpose the faces of respected actors like Bob Hoskins and Nick Frost onto small dwarf bodies. These seven dwarves eventually aid Snow White in standing up to Ravenna, but are never the focus of the film. 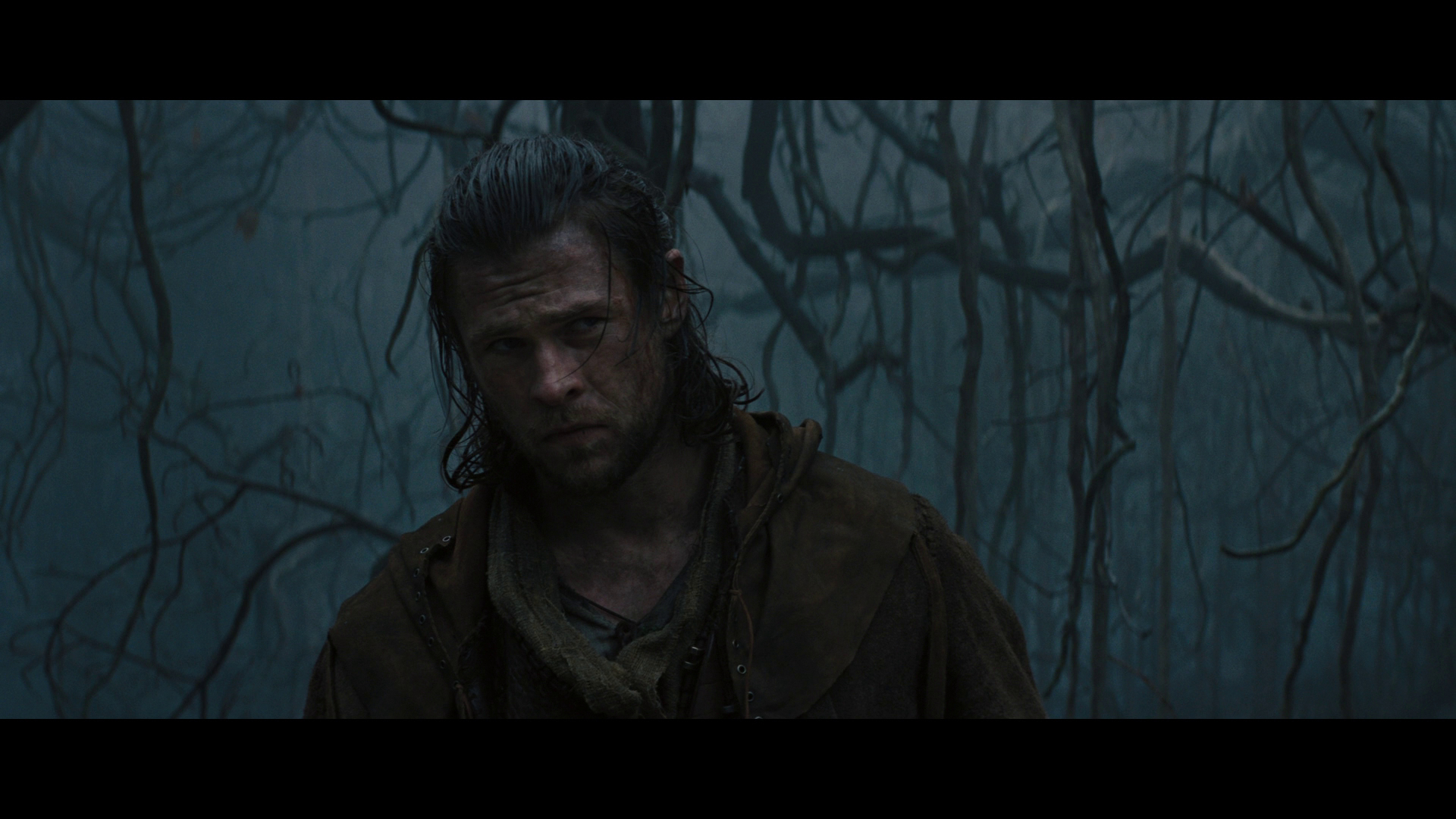 Snow White and the Huntsman's biggest flaw may be its pacing. The opening scenes move swiftly, but things slow down considerably once the Huntsman flips on Ravenna and joins Snow White and young warrior William (Sam Claflin) at the dwarves' home. There are some sweet abet underdeveloped scenes where Snow White shows an unusual bond with animals, but Ravenna, the true star of the film, all but disappears during these sequences. Though Snow White leads troops into battle against Ravenna, she is no warrior. After spending a decade as the queen's captive, it's not surprising that words come slowly to Snow White, and the film gives her relatively little to say. 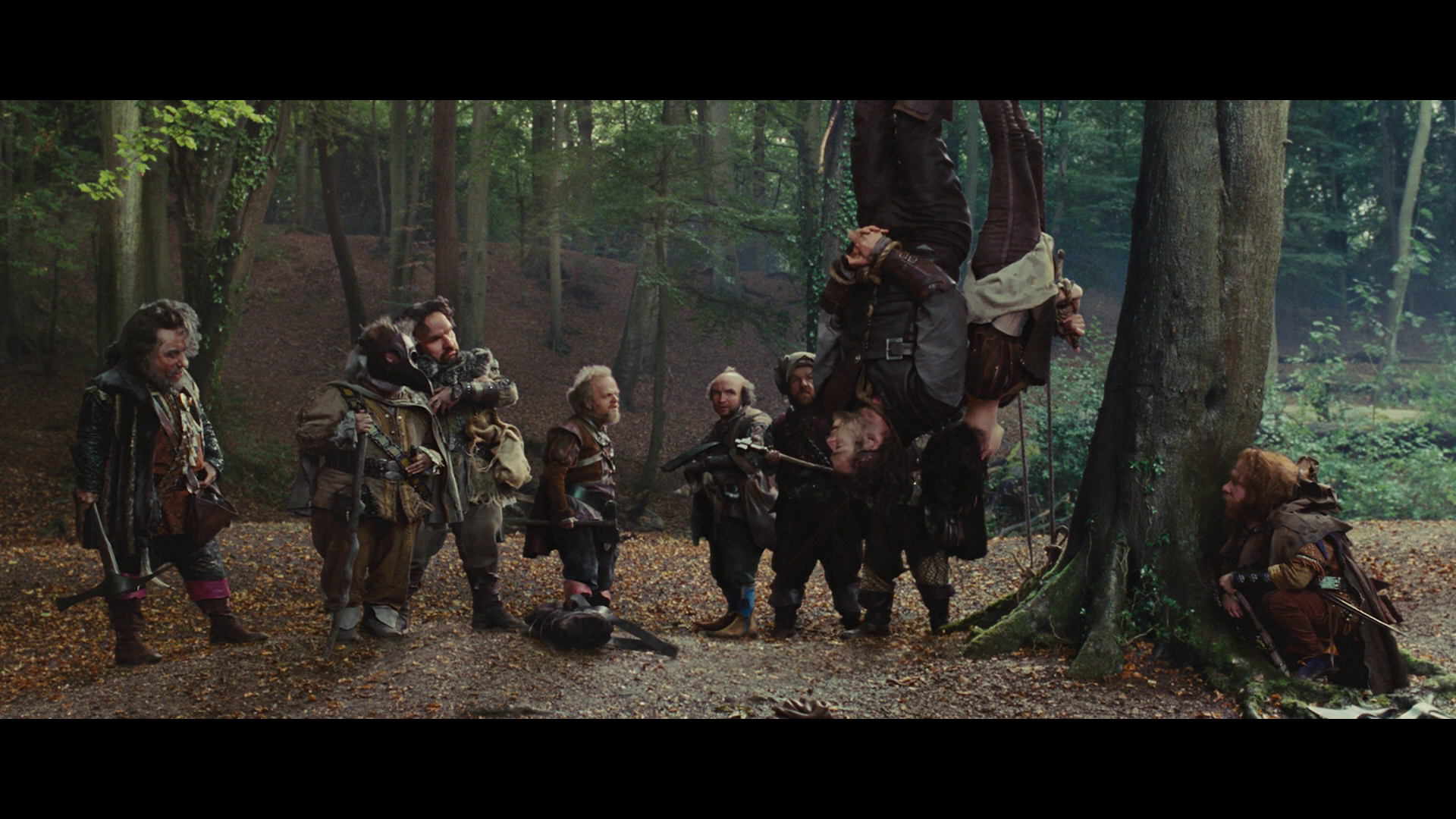 Stewart is a polarizing actress, but her work is certainly acceptable here. She looks the part, and I completely believed her transformation from prisoner to rebellion leader. Hemsworth, who may get his own Huntsman spinoff, brings the same boorish charm as he did when playing Thor, and he serves as Snow White's battle ax. The motley crew of dwarves is an interesting diversion, but they often feel like accessories to the film. I was never particularly invested in any one dwarf, so any sacrifices scarcely resonated. Theron commands attention here, and, while her performance borders on overacting, I longed for her presence on screen to keep things lively. Theron, along with the impressive visuals, makes Snow White and the Huntsman worth seeing, and the addition of some solid action pieces is icing on the cake. Those not keen on Stewart likely won't change their opinions here, but Sanders seems poised for success as a director of big Hollywood films. 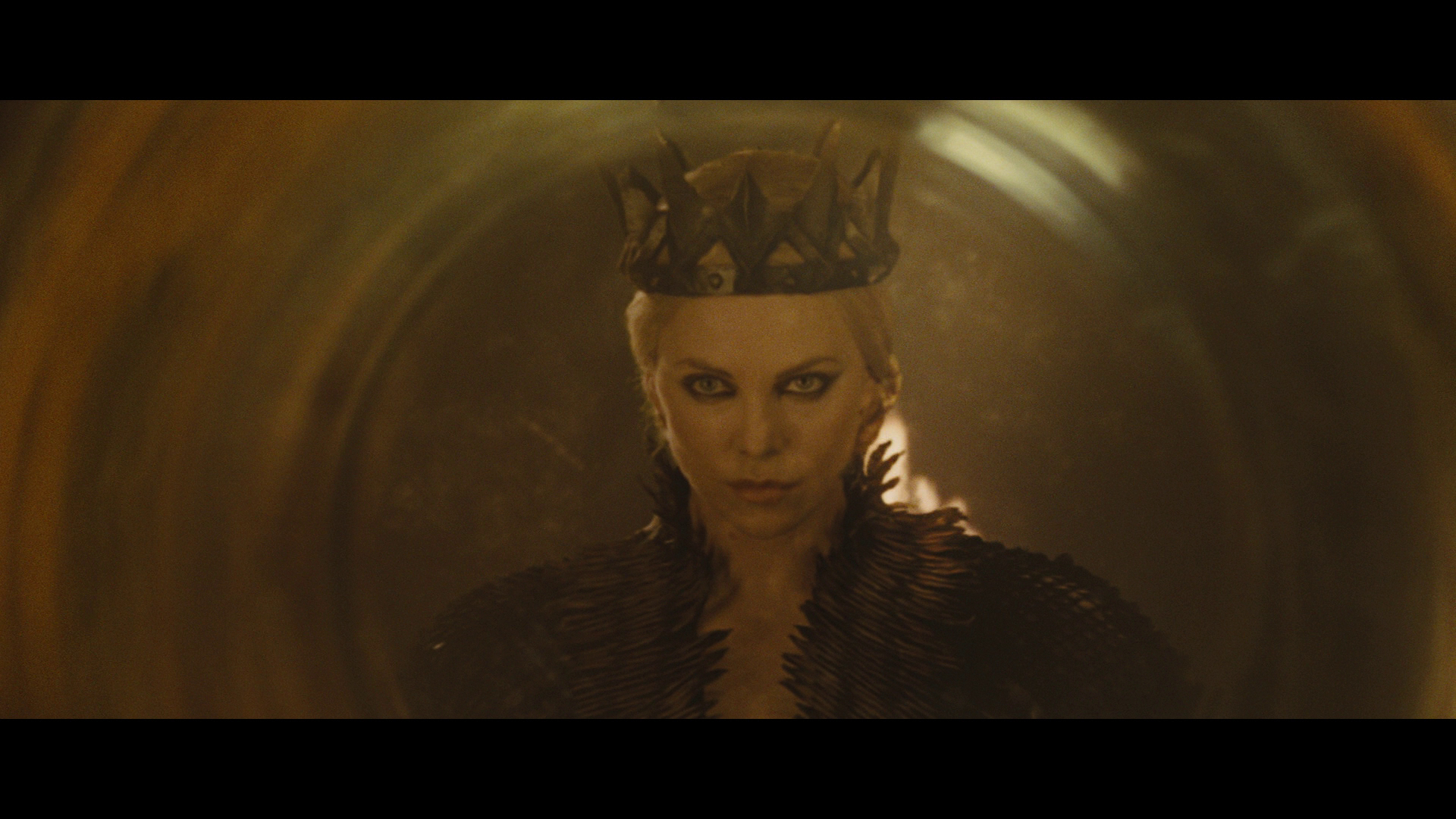 Another week, another excellent recent release from Universal. Snow White and the Huntsman sports a gorgeous 2.35:1/1080p/AVC-encoded transfer that supports the film's accomplished visuals with superb detail. Backgrounds stretch for miles, and close-ups reveal tons of facial details and fabric textures. Black levels are rock solid, and colors are perfectly saturated, whether the cold grays and blues of Ravenna's castle or the bright reds and greens of the fairy sanctuary. The image is not especially grainy, but feels quite film-like, which is a nice change from the recent trend of plastic, digitally shot epics. There's absolutely no banding, shimmer, artificial sharpening or print defects to report.

Universal supplies the film with a massive 7.1 DTS-HD Master Audio soundtrack that is just as impressive as the transfer. The sound design is really excellent here, and Sanders makes full use of the surround speakers and subwoofer. Ambient and action effects both make their way to the rear, and there is plenty of directional dialogue. Sound pans roll smoothly through the speakers, and artillery fire whizzes from back to front. The subwoofer supports explosions and sword clashes, and horses gallop crisply around the sound field. Dialogue is excellently balanced amid the often chaotic effects, and the score is rich and perfectly rendered. French and Spanish 5.1 DTS tracks are also included, as are English SDH, French and Spanish subtitles.

Snow White and the Huntsman arrives as a two-disc set, which includes the Blu-ray, a DVD copy of the film and an insert to download a digital copy on iTunes and redeem a streaming copy from several UltraViolet providers. The discs are housed in a standard Blu-ray case, which is wrapped in a matching, embossed slipcover.

The film is presented in two cuts on Blu-ray: The theatrical version (2:07:14) and an extended cut (2:11:33). There is not much difference between the two, but the extended cut includes a few extra scenes near the beginning of the film.

Universal includes a nice assortment of bonus features, all of which are presented in high definition: 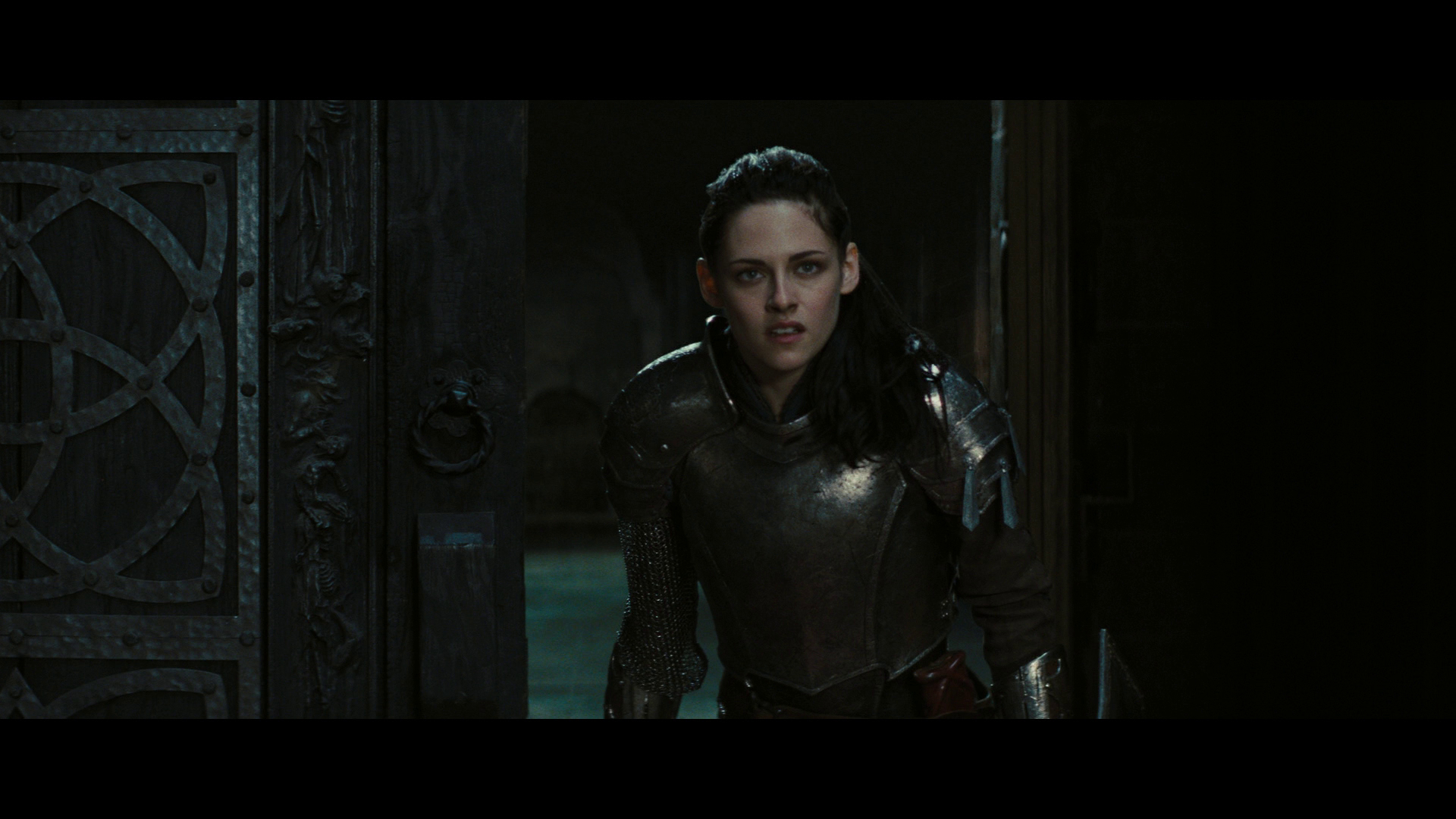 Charlize Theron steals the show as the evil Queen Ravenna in this fantasy update of the Snow White fairytale. Kristen Stewart and Chris Hemsworth play the title characters in Snow White and the Huntsman, and director Rupert Sanders creates a visually arresting epic, complete with dwarves, fantasy creatures and epic battles. The pacing stutters in the middle, but Snow White and the Huntsman is worth watching for Theron's wild performance alone. The Blu-ray features excellent picture and sound and is loaded with extra features. Recommended.