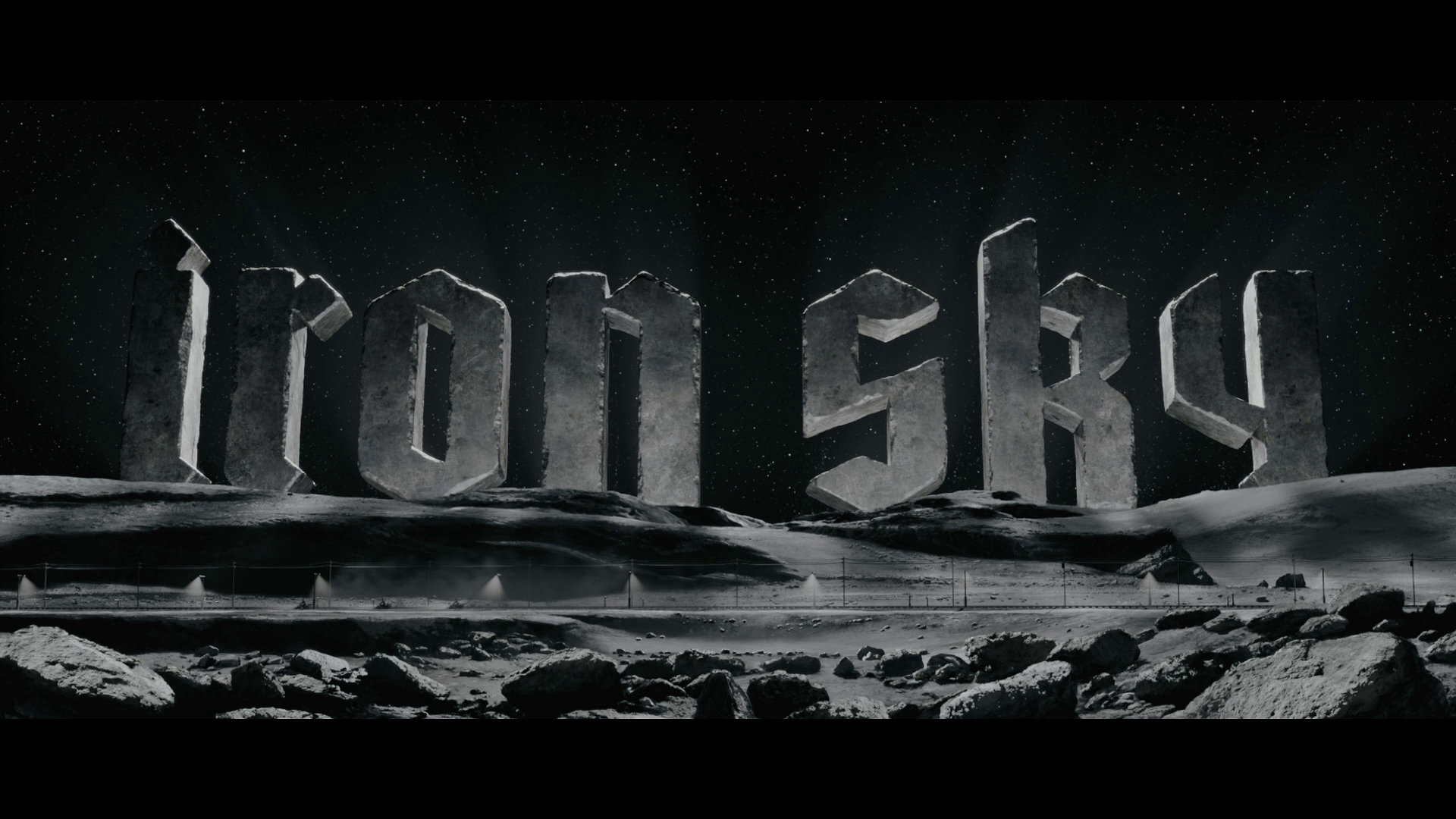 Nazis in space! Iron Sky riffs on the wacky idea that Nazis escaped to the Moon in 1945 and built a huge base, where they continued to foster their Aryan ideology far from prying eyes on Earth. When the United States sends a shuttle back to the Moon in 2018, the Americans encounter some expectedly unfriendly Nazi soldiers. Iron Sky certainly is not a good movie, but it is goofy fun. Jokes about a Sarah Palin-esque American president who adopts a Nazi campaign platform are not as clever as Director Timo Vuorensola probably hoped, but anachronistic Nazis on Earth provide enough comedy fodder to make Iron Sky worth checking out. 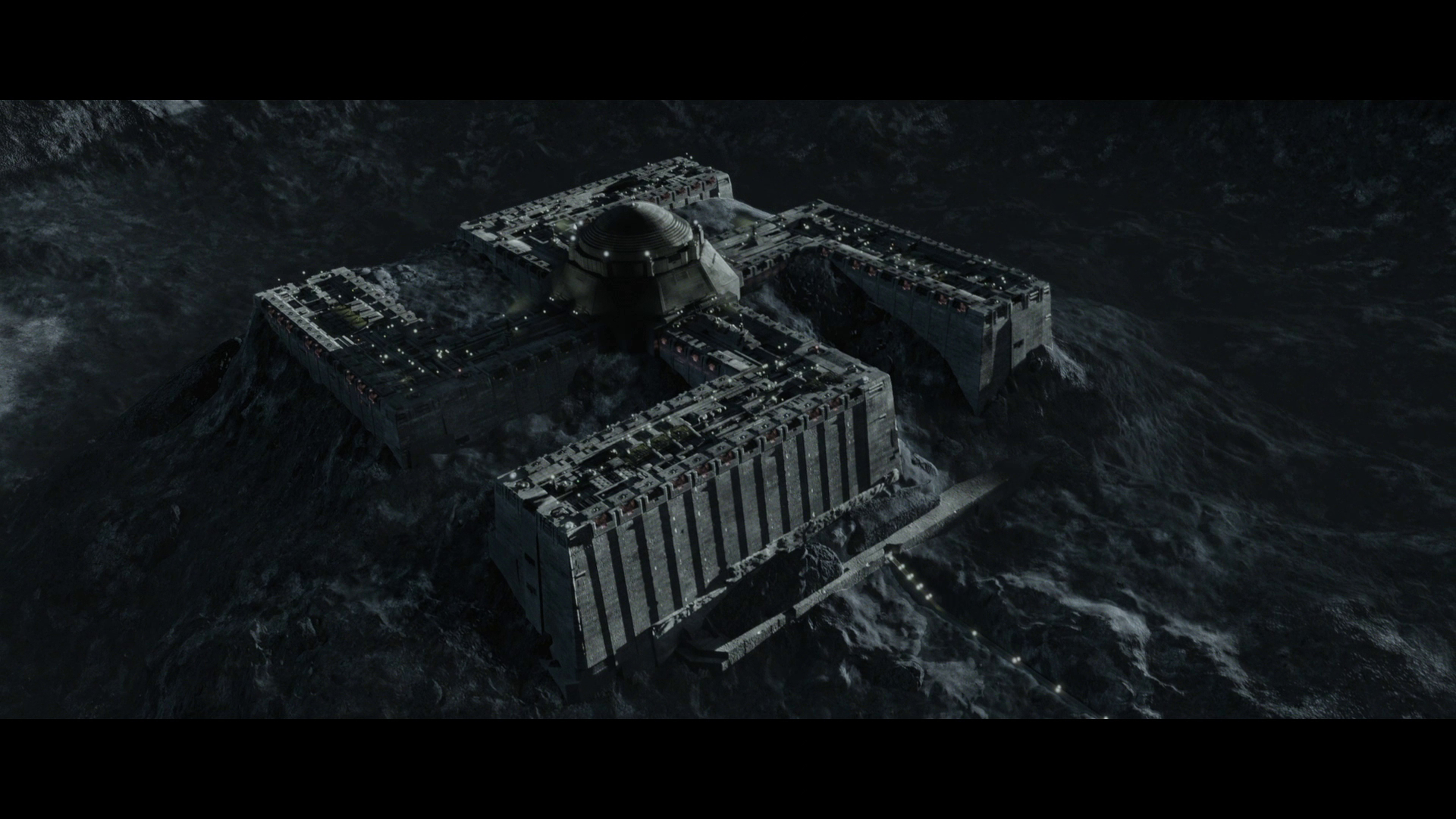 Hearing their campaign was lost in World War II, Nazis traveled to the dark side of the Moon, where they set up a large base and continued living much as they had on Earth. In 2018, the Nazis capture astronaut and male model James Washington (Christopher Kirby), who is part of the president's (Stephanie Paul) "Black to the Moon" campaign. Among the heavy hitters in the Nazi camp are new Führer Wolfgang Kortzfleisch (Udo Kier), mad scientist Doktor Richter (Tilo Prückner) and Nazi agent Klaus Adler (Götz Otto). Richter begins to Aryan-ize Washington, and Adler plans a trip to Earth to find more cell phones, the power of which far surpasses the Nazis' current technology. Adler takes Washington home with noticeably whiter skin, and discovers his love interest, Renate Richter (Julia Dietze), is a stowaway aboard the ship. 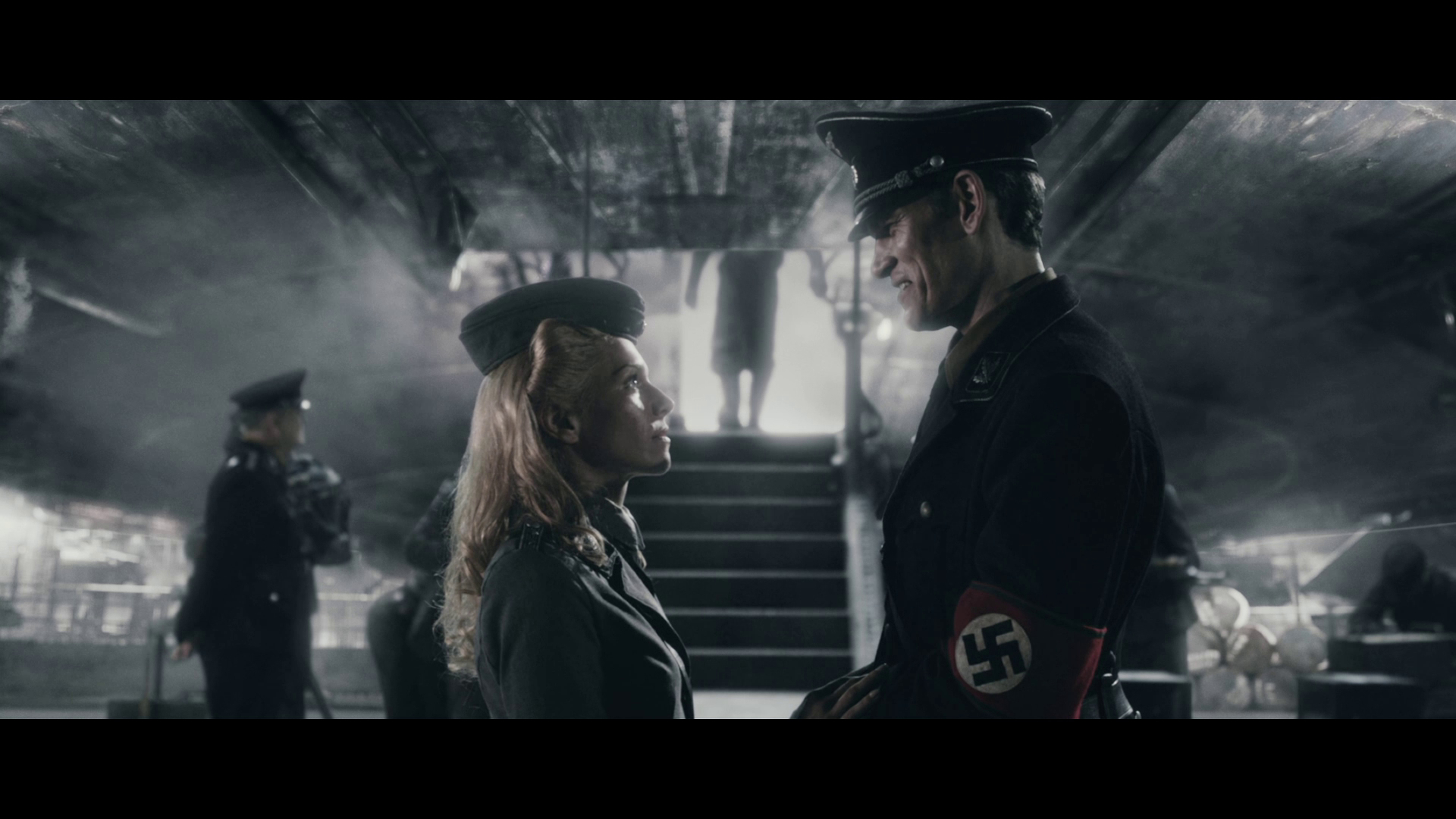 The mere idea of Nazis on the Moon is enough to elicit a few chuckles, and Iron Sky does a decent job of expanding on the joke. On Earth, Richter and Washington team up to stop power-hungry Adler from launching a full-blown invasion, and Adler snuggles up to the president's feisty campaign adviser, Vivian Wagner (Peta Sergeant), who thinks Nazis are just the thing to kick-start the president's floundering re-election campaign. Iron Sky is a decidedly silly film. Richter doesn't realize the Nazi ideology is one of hate, and the film's Nazis claim one of tolerance. The Nazis' ridiculous swastika Moon base houses living quarters, a school, spacecraft hanger and laboratories, and the inhabitants live a simple, old-fashioned existence. 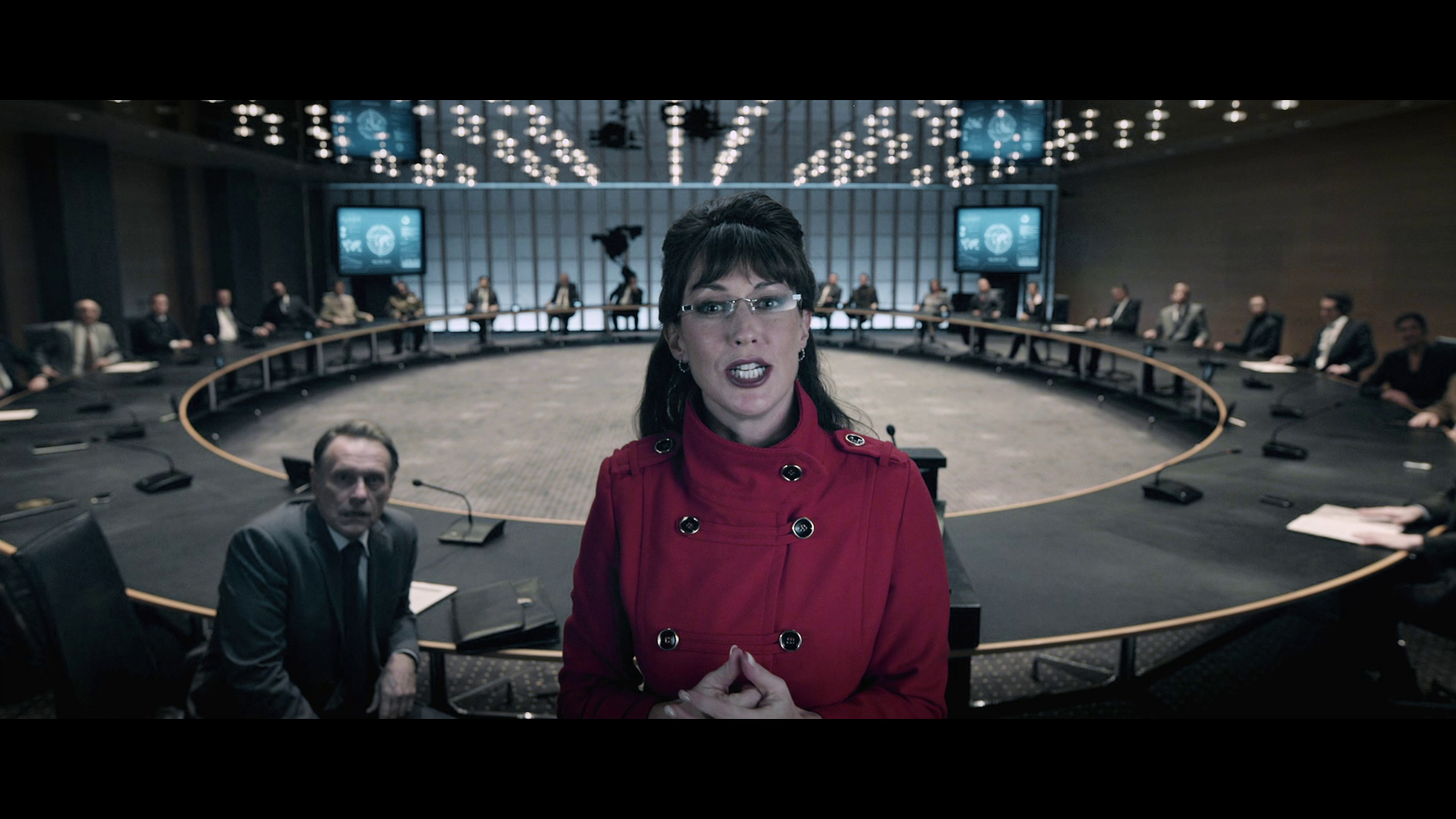 Iron Sky at times stretches its premise to the breaking point. The film's main jokes involve the clueless Richter, whose sunshine and sprinkles demeanor clashes with her Nazi duds. She approaches a group of neo-Nazis on a city street, and realizes her perception of her tribe's behavior does not equate with the majority opinion. Adler is elated to spot a Volkswagen van on Earth, and the president is excited at the prospect of war, which she claims will get her re-elected. There are also some dumb, sketch-comedy gags that fall flat, but the high concept is enough to float the film during its breezy 93 minutes. 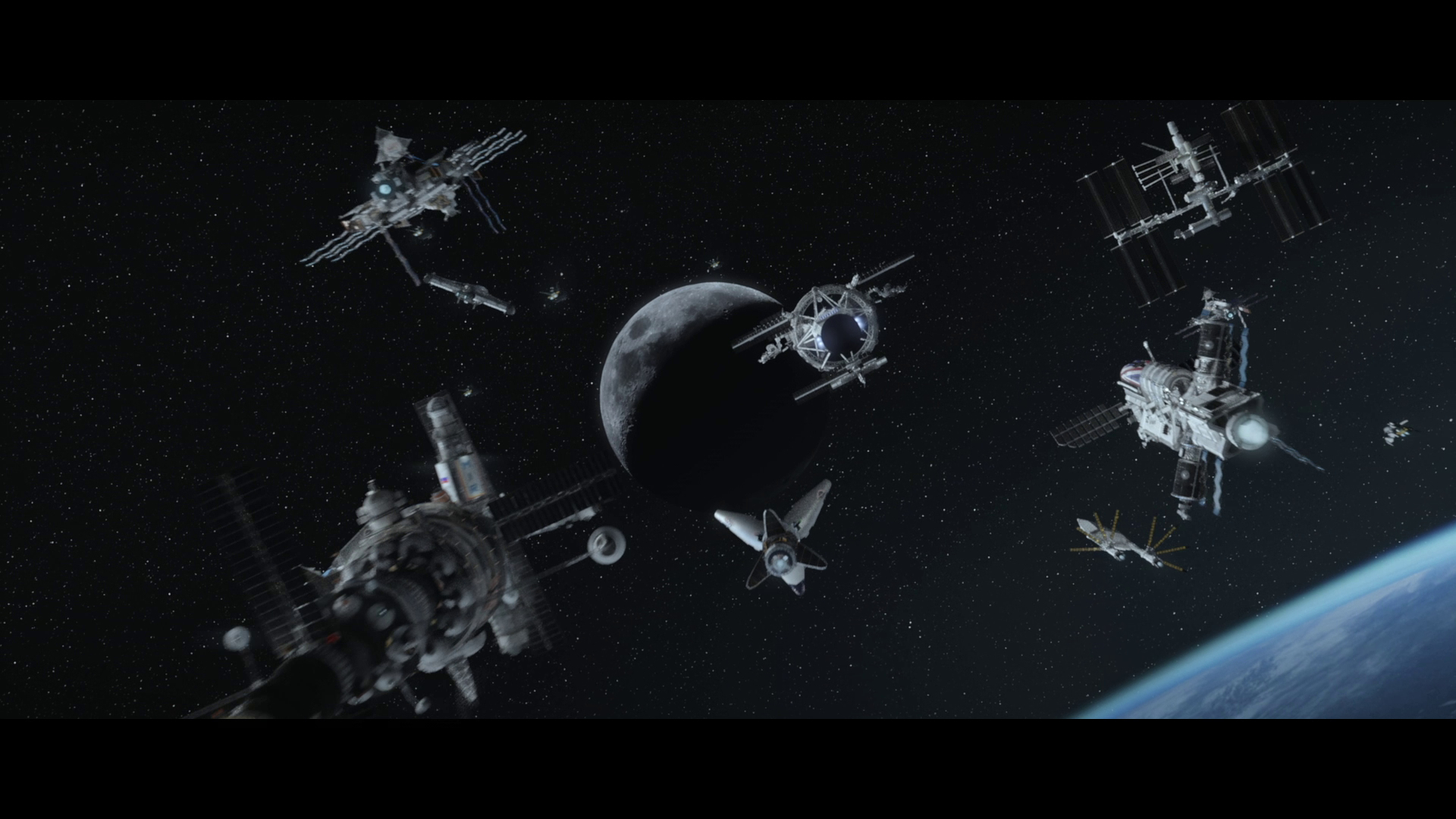 Iron Sky culminates in an Asteroids game-esque space battle between Earth's developed countries and the Nazis. The effects are effectively chintzy but add to Iron Sky's B-movie appeal. There's more than enough action, humor and tomfoolery to pass the time here. I'm not sure there's much replay value, but I had fun with Iron Sky on the first go-round. 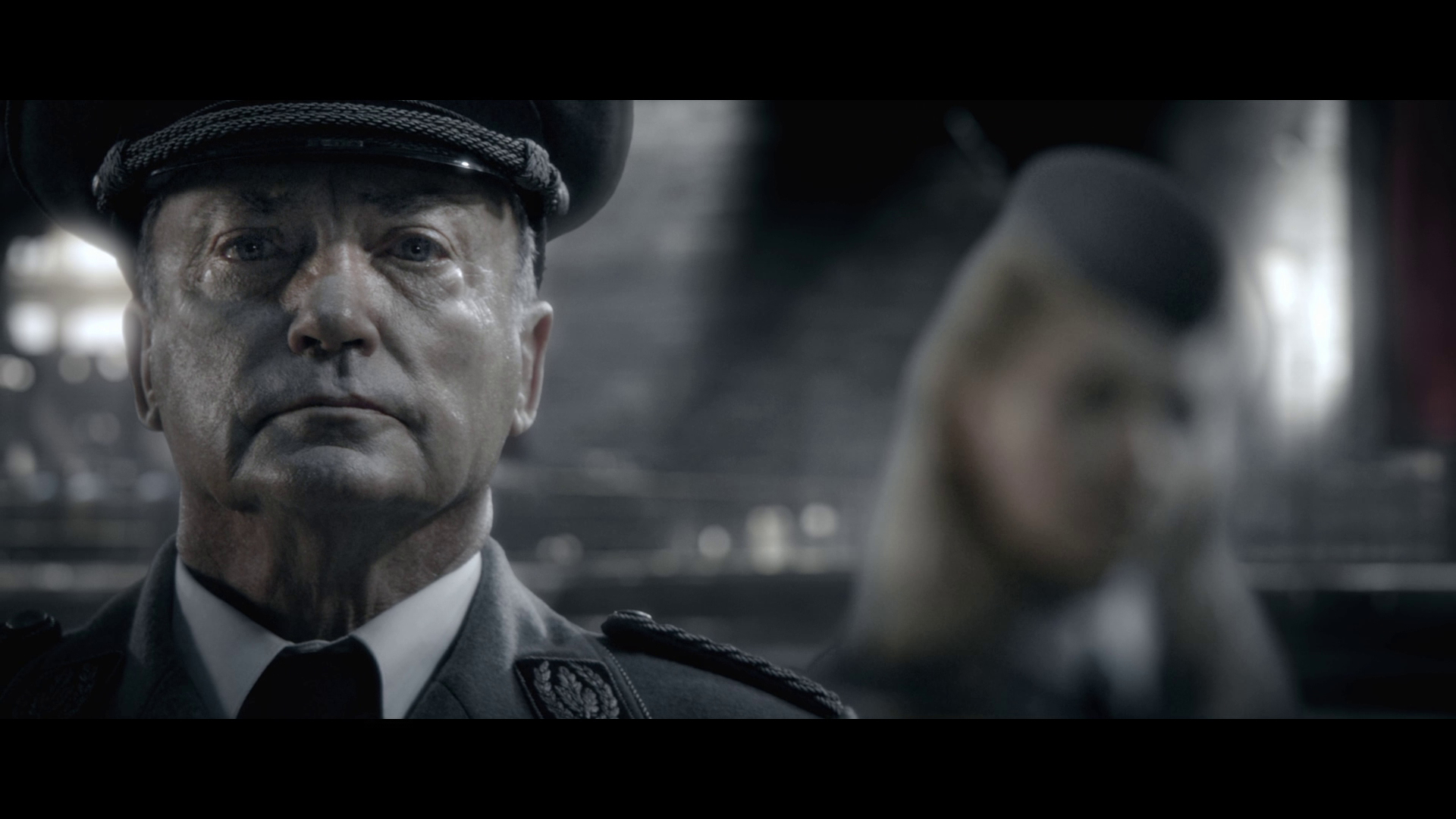 The 2.35:1/1080p/AVC-encoded transfer for Iron Sky is good but displays some anomalies likely attributable to the film's low budget. The entire image is a bit soft, but there is still plenty of detail in the close-ups. The softness may be to smooth out the effects, and wide shots are decently deep. Black levels are occasionally problematic and lean toward grey, and I noticed some black crush. Compression artifacts are not a problem, and there is only minor banding.

The German/English 5.1 DTS-HD Master Audio soundtrack displays good range and clarity, with pronounced effects and clear dialogue. The surrounds are used for ambient and action effects, and the subwoofer kicks in frequently to support gunfire and space warfare. An English/German 5.1 Dolby Digital track is also available, as are English subtitles.

Iron Sky comes in a standard Blu-ray case, which is wrapped in a holofoil slipcover with embossing on the title lettering. Extras include a Making-Of Featurette (17:22/HD), Behind-the-Scenes (18:13/HD), an Audio Commentary by Producer Samuli Torssonen and Director Timo Vuorensola, and the film's theatrical trailer (1:52/HD) and teaser trailers (5:40 total/HD). 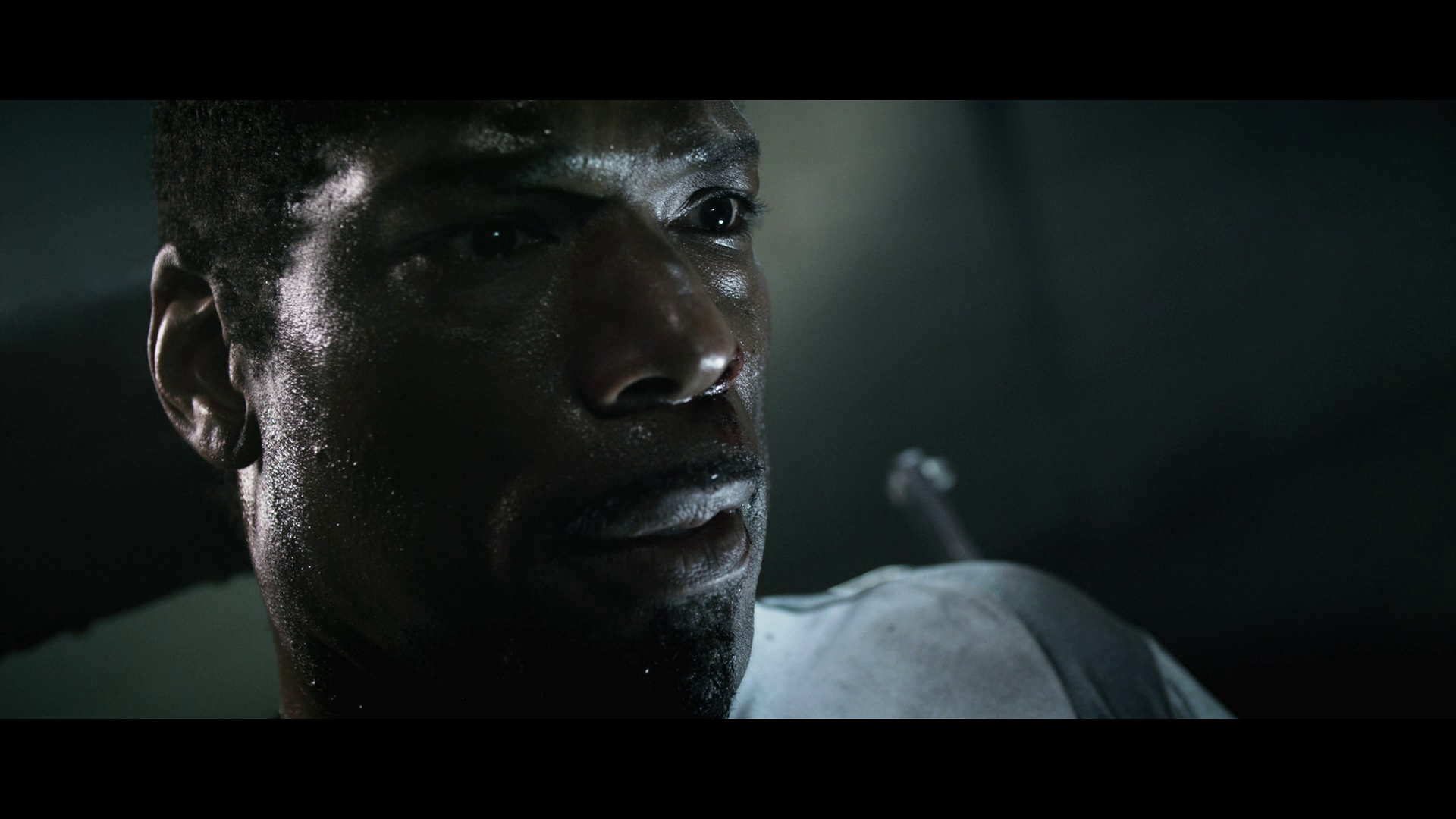 Comic science fiction B-movie Iron Sky plays fast and loose with its premise. Nazis escaped Earth in 1945 and set up a Moon base. In 2018, an astronaut stumbles upon the dormant army, which threatens to start a global invasion. Iron Sky is amusing, with its mid-level effects and fish-out-of-water humor. There may not be a lot of replay value here, but Iron Sky is worth a spin. Rent It.