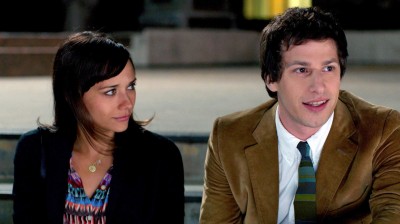 Still photos, sweet music, snappy byplay, and lots of "I love you"s: the interesting trick in the opening scenes of Lee Toland Krieger's Celeste and Jesse Forever is that we don't realize we're watching a couple at the end of a relationship, and that's why their friends are freaked out. It's not right that a couple on their way to a divorce are still hanging out with each other every day, sharing their inside jokes and intimacies. They object: "It's the perfect break-up!" insists Jesse (Andy Samberg), and for a time, it looks like he's right. He's not, of course; he's hanging on to the relationship for dear life, hoping that Celeste (Rashida Jones) will change her mind. Maybe she will, and maybe she won't, and either way, it might be too late.

His buddy Skillz (Will McCormack, who co-wrote the screenplay with Jones) encourages him to get out there, to start dating again, if for no other reason than to remind Celeste that he can--that he might be in some demand. It's clear from the beginning that she's much more detached from the relationship than he is, but when he springs on her that he's not only seeing someone, but getting serious, the movie pivots, just a little. Krieger's camera follows her out of the room, and the rawness of her private reaction hits the story's reset button. It's a fleeting moment, but a powerful one, and a welcome indication that this indie rom-com might be going to some places we've not been before.

To be sure, there's plenty of what you'll expect: Celeste's dating misadventures, for example, are easy laughs (but they're good ones), and there are complications with her bestie (played to perfection by the invaluable Ari Graynor), who is--of course--getting married just as Celeste is getting divorced. That's the stuff we're there for; that's the stuff you can put in a trailer or a clip reel. But Celeste and Jesse Forever is a surprisingly quiet and insightful little movie, and there's a nice intimacy to its look and style. David Lanzenberg's cinematography has a soft, off-hand beauty, and the performances, for the most part, accent naturalism over schtick.

That starts with Jones, who gives what is undeniably a movie-star performance: she gets big laughs and big sympathy, often simultaneously. She's also no slouch as a screenwriter; she and McCormack have good ears for dating dialogue, for the subtle difference between sparks and politeness, and Celeste is an admirably complicated character, fickle and difficult, smart but capable of really stupid decisions. Their supporting cast is aces, particularly Elijah Wood as her business partner (he gets one of the movie's best chuckles with his apologetic "Sorry, I was trying to be your sassy gay friend") and Chris Messina as a potential beau (I'd like to imagine this is some kind of alternate universe remake of their previous pairing, the wonderful Monogamy).

Jones is a winning performer who has yet to nab a film role that really showed what she can do; as good as she is in something like I Love You Man or Cop-Out, those are thankless, girlfriend roles, and she's better than that. It's interesting that her screenwriting debut is hitting theaters just after Zoe Kazan's, and while Ruby Sparks is a lesser film than this one, both show a welcome trend of smart, gifted actresses taking their personas into their own hands and writing roles more worthy of their time than the material they're handed. And, like Kazan's film, Celeste and Jesse Forever is a different sort of story, one free of at least some of the predictability that plagues the rom-com as a genre. It gets at the complexity of a break-up with more nuance and sensitivity than we've come to expect, or predict. The trailers make it look like a movie you've seen many times before. It's not, to its credit.