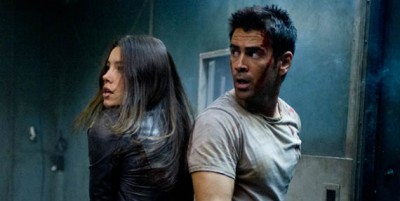 There are few things this world needs less than a remake of Total Recall, and walking in with that skepticism (and its resultant low expectations) actually works in the favor of Les Wiseman's new remake, which surprises merely by the act of not being terrible. Sure, the set-up is clunky and the climax is a mess, and though it seems inconceivable, they've managed to make a movie that diverges from the 1990 original yet still isn't a proper adaptation of the Philip K. Dick story they're both ostensibly based on. But if you put all those issues aside, there's about an hour in the middle of this Total Recall that is, plain and simple, crackerjack action filmmaking, and that's a rare enough commodity that it's worth noting.

The film opens with an overload of onscreen text, the standard mumbo-jumbo about a future where most of the earth is uninhabitable, and all that's left is the "United Federation of Britain" and "The Colony," which are connected by an earth-burrowing transit system called "The Fall." (Unlike its predecessor, Mars is only mentioned in passing here.) Commuting between them is Doug Quaid (Colin Farrell), an assembly line worker who's vaguely dissatisfied with his life, in spite of the fact that he's married to Kate Beckinsale. Nonetheless, he decides to try Rekall, a memory implantation service, and the Bond-reading drone opts for a virtual secret agent experience. And then the alarms go off, because ha ha, he already is a secret agent.

The rough outlines of the films are basically the same, Mars notwithstanding, and though the early scenes fumble a bit with the boatloads of exposition, the film does have a bit more interest in setting up Doug as a complicated, three-dimensional character. (It helps to have someone who can act in the role.) As a result, the moment when the switch is flipped--a Bourne-esque moment when instinct and muscle memory take over, and the Average Joe is suddenly kicking ass and taking names--has a real charge to it, and the filmmakers wisely capture it in a thrilling (though surely computer-aided) single shot.

At that moment, the picture basically becomes a chase, jumping briskly and efficiently from one set piece to the next. Most of them, it must be said, are very good. Fight scenes are sturdy and well choreographed, a chase though a horizontal/vertical elevator shaft is ingenious, and Beckinsale proves a formidable foe--this woman is not to be trifled with. Only one major sequence in that middle stretch fails, a flying car chase so hyper-synthesized and over-CGIed that is more like watching a video game than a movie.

Something's gotta give in all that running and jumping and punching and shooting, and unsurprisingly, it's the nuances of Dick's storytelling, though they do tease the fleeting possibility (in one brief scene, clumsily handled by a rather limited Bokeem Woodbine) that the whole thing is just a twisty mindfuck. As before, though, that stuff's just window dressing--beyond the already overcooked window dressing of Underworld director Len Wiseman, who has expanded his greys-and-flashy-lights aesthetic with enough lens flares to make J.J. Abrams jealous. But the production design is engrossing, with an impressively detailed, expectedly bleak pseudo-Blade Runner cityscape (at this point, it would be wildly contrarian to make a futuristic movie where everything is clean and brightly lit).

Wiseman's film gets away from him in the climax, where it's overwhelmed by the large-scale effects to such a degree that the action isn't as tight. (Neither is the logic, for that matter; though Farrell's character is supposed to be a master spy, his blow-stuff-up-real-good solution seems one that just about anybody could have come up with.) The great Bill Nighy is mostly wasted, and if you think this is the movie where suddenly Jessica Biel's going to become an interesting screen presence, you're in for a disappointment. But it does have a villainous Bryan Cranston, something we can all agree our summer blockbusters could use more of, and, again, about an hour of well-executed action. That's pretty much all we're looking for at this time of the year, and though it is wildly unnecessary and certainly less than memorable, for a good stretch, this Total Recall is sleek and fast and unabashedly entertaining.