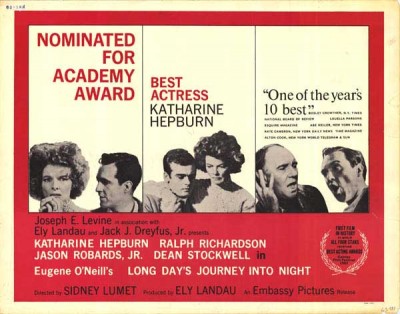 I will always have a special relationship with Long Day's Journey into Night, despite originally approaching it with some suspicion. It's been my experience that when people tell you they have the perfect book to read or movie to watch for you, because there is someone in the story that is you, when you take the recommendation, you either end up confused by how little they know you or insulted that they look at you the way they do. So it was that in high school a friend said I should read Eugene O'Neill's play because it reminded him of me, and there was a character named Jamie that I would probably have some affinity for. Which made it even more suspicious. A character that shares my name?

But damned if that person wasn't correct. I read Long Day's Journey into Night and loved it, and despite the gulf between us in age and experience, saw something of myself in Jamie. His caustic sense of humor, his distrust, his self-loathing, his cynical worldview--yes, this fit me to a T.

Jason Robards plays Jamie in the 1962 film version of Long Day's Journey into Night, directed by Sidney Lumet (12 Angry Men, Before the Devil Knows You're Dead), shot word for word, scene by scene, from the original text. Jamie is the eldest of three sons in the Tyrone family. The middle boy died as a baby, and the youngest, Edmund (Dean Stockwell), is in the middle of being diagnosed with consumption. The year is 1912 and the Tyrone family are at their summer home by the water in New England. The family patriarch, James, is a retired actor who was popular on the stage, though he now feels he squandered his talent by allowing himself to be locked into one production for the bulk of his career. It was at a weekend matinee that he met Mary (Katharine Hepburn), who was then a shy teenager fresh out of the convent. They fell in love and married.

That was a long time ago, but memory plays an important part in the Tyrone lives. Yesterday's pain is as sharp today as it was then, and yesterday's happiness is a bitter reminder that not is all so good at the moment. Jamie spent some time acting himself, but now he spends most of his time drinking. All the Tyrone men do. There are some obvious signs of alcoholism in their behavior, including a lot of denial. There is also a double standard about addiction. Mary has struggled with morphine since giving birth to Edmund. Complications from the delivery led to the treatment being a dangerous cure that she has never shaken. On this one particular day, following a sleepless night, Mary has taken up the needle again. The rest of her family sees the signs rather quickly, they are familiar. Between this development and Edmund's impending diagnosis, there isn't a nerve left to be frayed.

Long Day's Journey into Night takes place over a 24-hour period, and the events stay centered around the Tyrone home. Most of the nearly three-hour film is set in the front room of the house. Trips are made into town, but we don't go with the characters, we remain with whomever stays behind. As the hours wear on, darkness descends, both in the literal and the metaphorical sense. O'Neill's play lifts the roof on the Tyrone home and lets us peek inside, where the family tears at each other and argues over their issues and basically gets on with the business of being a family, the niceties strained by a lifetime of secrets and lies. Jamie has a go at his dad for being cheap, while James goes after his son for being lazy. Father and youngest son argue over books. Mother morbidly obsesses over her lost child and indulges in paranoia and accusations. Positive recollections invariably devolve into recrimination, anger, and resentment

As a stageplay, Long Day's Journey into Night is driven by dialogue and performance. Lumet does nothing to mess with that formula. He allows his camera to act as an observer, exploring the room for reactions and gestures, but also stopping to listen when necessary. Boris Kaufman, who also shot Jean Vigo's films and several of Elia Kazan's best, moves the lens imperceptibly, never calling attention away from the actors, but instead calling it to them. The main quartet is working at an astonishing level of craft here. The tension of the writing come from how each character behaves independently, almost as if separate from the whole, but also like the many functioning parts of an engine, each required lest the operation break down. So it is with the actors. Richardson is regal and grand, where Robards is angry and twitchy--if the father is an unyielding wall, the son is the same wall after having been knocked down. Stockwell holds plenty in reserve, letting emotion emerge when the tide of feeling is no longer bearable. Hepburn is a spool of thread slowly becoming uncoiled. She vibrates with a nervous energy that is astounding. The protective younger son, we can believe, holds back because of her, because it's learned behavior.

Watching this cast circle each other and gnash at the material is a marvelous thing. Even at its extended length, Long Day's Journey into Night passes without ever lagging or showing the aging process. The dialogue is so strong and the delivery so precise, they demand your attention and will have little problem holding it. The narrative works as a kind of puzzle, a verbal Rubik's Cube that we watch turning, turning, turning, until all the sides and colors line up, and all is revealed. The finale is devastating, and Lumet shows it as both alienating and distant and also personal and up-close, jumping from a long pull back to an extreme close-up, and back out again, leaving the Tyrone's in the fog where we found them--and where they've lost themselves.

Video:
The high-def, black-and-white presentation of Long Day's Journey into Night looks fantastic. The overall clarity of the widescreen image is sharp, with only minor haze and the occasional flicker. In terms of print damage, there are a couple of noticeable scenes that are scratched, but they are short and isolated. Blacks are strong, dark without any splotchiness. For a film that was not given a full-blown restoration, this Blu-Ray looks excellent.

Sound:
The original English soundtrack is mixed in mono and it is as clean as the image. The dialogue sounds great, making it easy to keep up with what is going on. Andre Previn's music is soft and minimal and given the right placement in the overall audioscape. I noticed some very minor hiss a couple of times, but otherwise heard nothing to complain about.

FINAL THOUGHTS:
I am so pleased that Olive Films has brought Sidney Lumet's cinematic adaptation of Eugene O'Neill's Long Day's Journey into Night to home video. It's a marvelous film of a marvelous play, with an unbeatable cast. Though Katharine Hepburn gives one of her best performances, the ensemble is so strong, there really is no noticeable MVP. Long Day's Journey into Night is a powerful drama, told here with a forceful simplicity, and this nicely put-together Blu-Ray couldn't be more Highly Recommended.