Hara-Kiri: Death of a Samurai (3D) 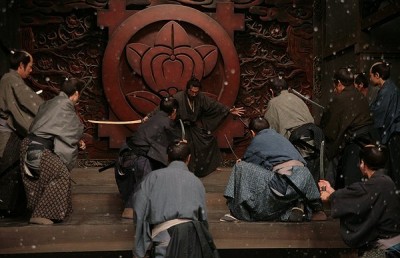 Following up the critical and creative success of last year's 13 Assassins remake, prolific Japanese filmmaker Takashi Miike has gone in for another samurai redo. This time he is tackling Masaki Kobayashi's 1962 classic, Harakiri. Retitled Hara-Kiri: Death of a Samurai, this is a pretty straight remake, with Miike's only real update to this 17th-century drama being that he shot the thing in 3D.

Ebizô Ichikawa stars in Hara-Kiri as Hanshirô, a samurai who has been without rank and station since his master was killed in a power struggle some years before. Fed up with a life of poverty, Hanshirô has decided to kill himself, and he has gone to the home of a neighboring lord in hopes of using his grounds for the deed. The acting head of the estate, Kageyu (Kôji Yakusho, Babel), is suspicious of the man's request, fearing he is yet another ronin who threatens suicide on a powerful family's land in hopes of extorting money from them (they'd rather pay for the guy to leave than have to deal with the mess he'll create). Kageyu tells the cautionary tale of a young warrior named Motome (Eita) who tried something similar not that long before. The men under Kageyu decided to make an example of him and forced him to carry through with the ritual disemboweling. It's a cruel scene. Motome didn't arrive with the proper tools, and Kageyu's men granted him no quarter. Rather than an honorable death, he suffered an excruciating one.

Once the story is done, the scales tip. Kageyu isn't a con artist looking to pull a "suicide bluff," but he has brought a story of his own. His is a tale of woe and misery, and one that ends in vengeance. Ebizô Ichikawa is a solemn narrator, detailing the intense tragedy in measured tones. His manner only changes when he reveals his true face. Suddenly, the actor has a wolfish appearance reminiscent of the great Toshiro Mifune.

Those expecting the gonzo action climax that made 13 Assassins such a thrill will likely be disappointed by Hara-Kiri: Death of a Samurai. Though the script's finale does involve a sword fight--and a pretty powerful showdown, at that--it's the only real action in the picture. Hara-Kiri is more a story of the indifference of fate and the struggles of the common man after uncommon promises have failed him. It's a deeper movie, and Miike approaches the work with a journeyman's skills. One might expect the director of Ichi the Killer and Audition to relish in the blood and viscera, but Motome's suicide is approached gravely and with a minimum of gore. It's still horrifying to watch, but more for the dying man's howls of pain and how we imagine the terrible action we know is occurring just out of frame.

Actually, Miike establishes such an elegant, simplistic mis-en-scene, it's kind of difficult to fathom why he chose to make this picture in 3D. Cinematographer Nobuyasu Kita (Shinjuku Incident) uses the added dimension well, arranging the objects in the frame to allow for some evocative separations of foreground and background, but it's so underplayed, it's basically superfluous. The only time we really notice the 3D effects is during the opening credits, when the names of the actors and crew appear as being apart from the rest of the imagery, as if they were painted on a pane of glass separating the camera and the sets. Hara-Kiri: Death of a Samurai is beautifully shot, but its seriousness doesn't jibe with the flashy technique.

I actually only saw Kobayashi's original Harakiri last fall when Criterion reissued the movie on Blu-Ray (I reviewed it for my own blog here). It's a remarkable motion picture, and honestly, superior to this retread. Miike is merely following in Kobayashi's footsteps. Perhaps if the 1962 version didn't exist, I'd be more enthusiastic about Hara-Kiri: Death of a Samurai, but the truth is, it does exist, and despite the 2012 effort being a fine film in its own right, it can't stand alone. If you've never seen the Kobayashi version then you will probably have no problem digging on this, but I'd encourage you to watch the older movie instead if you can. I really liked what Miike put on screen, but the apprentice is never going to surpass the master.