The densely plotted British public school drama Waterloo Road is apparently a big deal in the U.K., where its eighth series is currently running strong. It was produced by Shed Productions, the same outfit responsible for the better-known (here in the U.S., anyhow) Footballers' Wives. Trading manipulative, sexed-up trophy wives for overburdened teachers and snotty students gives a slight idea of what Waterloo Road deals with in each drama-packed episode.

Waterloo Road's ever-present turmoil mostly emanates from the lower middle-class Manchester, England middle school where it is set. In each episode, faculty members' complex personal lives butt up against their pupils' misbehaviors and the constant threat of closure due to an apathetic staff and underperforming students. The things that go on in each installment can get overwrought and kinda stupid, sure, but it's generally done with a thoughtful nuance for portraying complex, intriguing characters. The stories generally focus on the adult faculty members of the school, with the teen population's myriad problems taking up about a quarter of the show's running time (you just know that that adult/kid storyline ratio would be reversed if this was an American production).

As Waterloo Road opens at the beginning of a new school year, the old headmaster at the embattled institution is seen crazily tossing around paperwork on the roof of the school's administrative wing. It is into this boiling cauldron of incompetence that our newly promoted headmaster arrives - presiding over a faculty with so many neuroses of their own, it's a wonder that any real instruction gets accomplished in the first place. The eclectic cast of characters include:

Shot mostly within the confines of a real school, Waterloo Road has an immediacy that is usually missing from dramas of this ilk. That bracingly realistic setting helps out the show a lot, especially when the many intertwining subplots get too baroque for their own good. Although Waterloo Road been shown around the world to good ratings, the eight episodes collected on Series 1 were the only part of this elephantine saga to get any exposure in the U.S. (they were broadcast on the BBC America channel). If the other seasons are as juicy and watchable as this one, hopefully Acorn will eventually get around to releasing them soon. 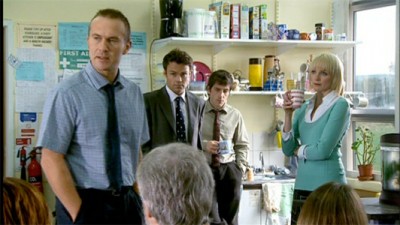 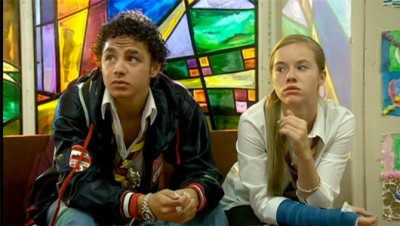 Acorn Media's Waterloo Road - Series One comes on two discs in a standard Amaray case with paperboard slipcover. The locker design on the package is interesting, since I don't believe they even have lockers at the school depicted in the show.

Presented in 16x9 anamorphic widescreen, visually the show is given a decent but not spectacular treatment on disc. Each DVD contains four episodes, which results in some pixelization, splotchiness and lack of detail. The cinematography, which appears to be filmed on celluloid, accurately captures the school's gritty atmosphere.

The stereo soundtrack on each episode was just fine, not very showy but serving its purpose adequately. English subtitles are also provided (helpful for the sometimes thick accents, although I never needed them).

Excepting trailers for other Acorn Media products on the first disc, there are no extras.

Compulsively watchable and full of British piss and vinegar (but not quite as gritty as it aspires to be), the first season of Waterloo Road is an entertaining seven-hour grand tour of the goings-on at a "typical" UK middle school. Though it isn't outstanding in any particular way, the carefully drawn characters and absorbing plots make one understand why it became a huge hit in its native country. Hopefully Acorn Media will be issuing the other seasons on DVD soon. Recommended. 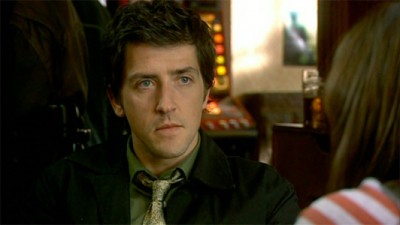 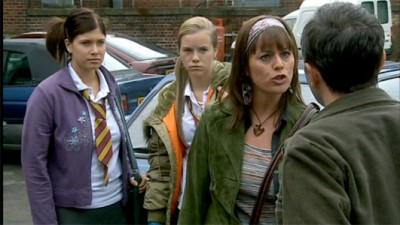