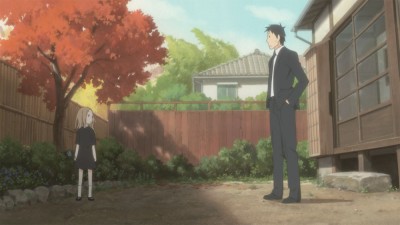 Bunny Drop begins its story on a solemn note. The opening episode takes place at a funeral. An elder man in his 80's passed away and the family had gathered to say goodbye to him as every person in the family seems to show up for the funeral. Yet no one is expecting to hear about a new development he had had in his life prior to passing on.

It turns out he had a lover who had ended up giving birth to a child; a child who was taken care of by "Grandpa" before he passed away. Now no one is aware of who the mother is and no one knows what to do with the child who is all alone at the funeral and without a family to turn to. The general sentiment from all of the adults seems to be a universal statement of "Should we make an effort to take care of this young girl?" and yet no one at the funeral steps up to raise her... no one makes an effort to keep her in the family. Except a young man named Daikichi.

The series main character is Daikichi. As a 30 year old bachelor he isn't the kind of person you may normally expect to find becoming an adoptive parent. Somehow, though... that is exactly what happens. He becomes a parent to this child that no one wants to acknowledge and who I imagine would have gone off to foster care were it not for Daikichi stepping in. He wanted to help raise her: a child who had just lost her parent and who was otherwise all alone. So that's exactly what he sets out to do.

Of course, Daikichi doesn't know much about parenting as someone who has no kids and no current relationship so the series spends most of its efforts focusing on the escapes and many challenges that Daikichi faces while learning how to become a good parent to the young girl, Rin.

Rin is six years old and she is already in school. Daikichi has to figure out how to juggle taking care of her in several ways: by buying her clothes and food to getting her to school at a daycare which is far away from the residential area he lives in and far from his workplace too. Rin is an incredibly sweet-natured child who seems to instantly connect to Daikichi. It isn't that long of a wait until a clear father-daughter dynamic exists. 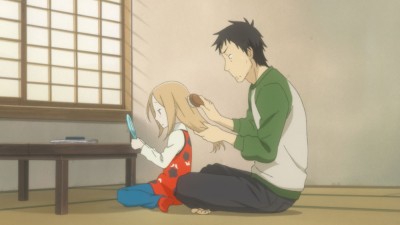 Yet is Daikichi ready for the responsibility of being a parent? This is a question the series asks repeatedly until the very end of the show. But if you don't mind spoilers: let's just say that he manages to tackle parenting with great sincerity and seriousness. Daikichi cares about Rin as much as any father would care for a son or daughter.  He even faces the hardship of meeting Rin's mother to find out more about what happened between her and his grandfather and to attempt to understand why she willingly left her child.

Part of the joy of watching a series as surprisingly thoughtful as Bunny Drop comes from seeing the development of Daikichi as a character and that is one of the ways it is something that truly excels and stands outside of normal anime territory. The show focuses on the growing family relationship between Daikichi and Rin as well another newfound relationship: that of Rin's friendship with a schoolmate named Kouki and Kouki's mother, Yukari.

Yukari is a single mother and Daikichi develops a crush on her while the two meet through Rin and Kouki's friendship. This is another aspect of the series that is intriguing: seeing the newly developed relationship between Daikichi and Yukari. Though the series never directly does manage a romantic course it does address the growing friendship between the two adults of Bunny Drop and the series suggests a possible relationship in the future. It is heartwarming. Absolutely. Heartwarming and charming are the two best words to describe this anime gem.

The storytelling is reasonably simplistic and yet this show is about as far away from being a simplistic series as you can get. It just serves as a reminder how sometimes the simple series, stories, and moments are the ones worth the most.

Ultimately, Bunny Drop is one of the most unique, inspired, and worthwhile anime series that I have seen all year. The ending isn't one that entirely satisfies every area of the series in that you feel the show and character development could continue on if they had been able to keep this an ongoing show, but this is still one of the most wonderful anime series of the year. If you like the kind of anime series that makes you think and feel and that isn't a routine "run-of-the-mill" type of series this is a quality production that is well worth seeking out. 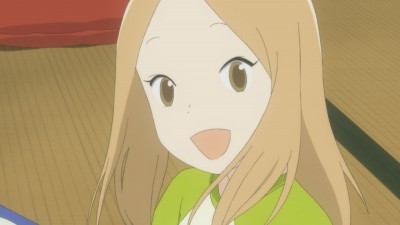 Bunny Drop isn't as visually stunning as some of the previously released NIS America sets that I have covered for DVDTalk but it isn't a fault of the transfer and work done on the release itself. The animation seems to have been done in a style that is softer and that aspect seems to be just inherent to the source material itself. The bitrates for the transfers and overall resolution of the release seems pleasant but I would hesitate to classify this presentation as being a great one. It just isn't quite the stunner you would hope for and yet it isn't exactly disappointing. I wasn't a fan of the softer style but it suited the show's low-key charm well enough and it didn't detract from my enjoyment. The bottom line is that this is still an excellent 1080p AVC encoded HD transfer and it is one that will be pleasant for fans of this show.

The Uncompressed PCM 2.0 audio is crystal clear and does an excellent job of reproducing the dialogue and music. It isn't the fanciest lossless audio presentations I have encountered on Blu-ray, but it's extremely pleasant in terms of clarity and this is of the upmost importance on these types of home media releases. The release has excellent audio quality that works well alongside the comparably worthwhile video quality.

The series is only presented with the Japanese dub.  English subtitles can be turned on and off through the main menu.

NIS America does not usually include much in terms of supplemental video features on DVD and Blu-ray. This release is no different. The main inclusion is a short series of mini-episodes (which play out almost as if they were a combination of short films or mere deleted scenes). I enjoyed these shorts and found them cute, entertaining, and worthwhile but I still found these inclusions to feel somewhat minimal. I still appreciate the fact that these were included on the release. 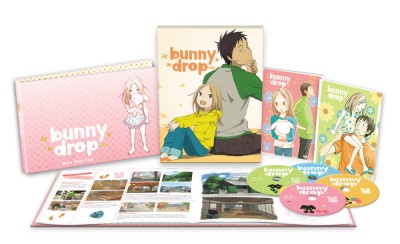 The only other supplement was found with the limited edition collector's packaging (which is beautiful): an artbook is included inside of the release packaging and that also has translated interviews with some of the creative team responsible for making Bunny Drop. It certainly is quality packaging and the book is pretty neat too. Anime fans won't feel disappointed with a presentation as impressive as what is found on this release. 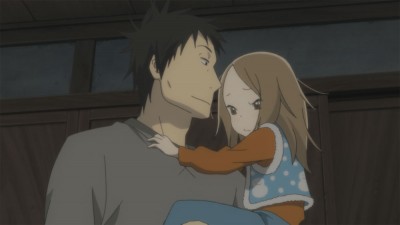 Bunny Drop is one of the most unique anime series I have had the opportunity to see. It reminded me of something that might be found broadcast on PBS, besides the fact that it is definitely an "anime series"; a genre that PBS doesn't produce. This would be an excellent series to watch with family members of any age. The story is compellingly told and here is a series which is capable of being something different from your typical anime TV series. It is a show for the entire family and that certainly makes it an interesting experience. Bunny Drop is a quality television program worth seeking out and purchasing because of NIS America's excellent release.