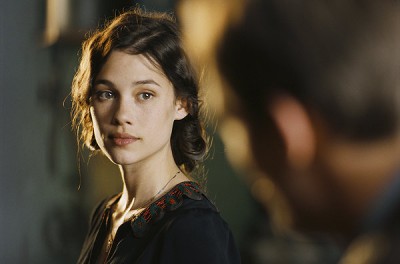 Respected French actor Daniel Auteuil (Caché) steps behind the camera for the first time to direct a remake of Marcel Pagnol's 1940 film The Well-Digger's Daughter. The filmmaker pulls double-duty here, also playing Pascal Amoretti, the widower father of six daughters. He lives in the French countryside, in the village of Salon, and as the title would suggest, makes his living digging wells. At the start of the picture, his eldest daughter, Patricia (Astrid Bergè-Frisbey, Pirates of the Caribbean: On Stranger Tides), is turning 18. Patricia spent most of her young life growing up away from home, as the ward of a rich woman in Paris. She at one point refers to her former residence as a convent, and indeed, her innocence would back that up. Patricia is a dutiful daughter, acting as mother to her sisters, and virtuous in every way.

Enter dashing pilot Jacques Mazel (Nicolas Duvauchelle, White Material). The son of the owner of Salon's general store, Jacques has a life of privilege. He is confident and more worldly than Patricia, and his brief seduction of her leads to unforeseen consequences. When the war in Africa calls for him to go to the front, Jacques leaves Patricia without giving her any warning--and also without finding out that she is pregnant.

It's a fine melodramatic set-up, and one that Auteuil plays for all its emotional weight. Yet, The Well-Digger's Daughter is far from a hand-wringing soap opera. The director stages the picture with a measured restraint, in some ways reminiscent of the efforts of Merchant Ivory, in others recalling the period in which the original film would have been made, and also the time in which the story is set. The emotional ups and downs that follow--a father standing up for his daughter, and then rejecting her; a son believed to have been killed in Germany--flow naturally out of the situation, while also reflecting the social mores of the provinces in the early-20th century. People are compelled by antiquated morals, as well as selfish impulses. The parents in particular, including Jacques' mother (played by Sabine Azema, a regular of Alain Resnais' stock company), consistently act in defense of their children, even when their choices are harsh, cruel, or wrongheaded. Pascal always feared he would lose his daughter to a slick "prince," whereas Mrs. Mazel was suspicious of the local girls making eyes at her boy. Naturally, both of them had their fears realized--though, by picture's end, those fears will also be defied and negated.

Astrid Bergè-Frisbey, who is actually a couple of years younger than her onscreen persona, gives a soulful performance as Patricia. Auteuil steers her away from histrionics, compelling her to play the big moments as small, interior eruptions of feeling. Patricia is proper, and also timid, and she is sharply aware of her mistakes even as she is making them. Bergè-Frisbey can do more by looking away from the person she is talking to than many veteran actors can pull off with a mouthful of dialogue and steady eye contact. The actress is convincing and empathetic as the girl in way over her head.

Also of note in the acting department is Kad Merad (22 Bullets) as Felipe, Pascal's employee and the man whom Pascal originally hoped his daughter would marry, despite his being much older than her. Felipe is a stand-up guy, sometimes providing the comic relief, but Merad never plays him as a buffoon. His shyness around the young girl is refreshing, and his sense of honor is to be admired.

Likewise, credit should be given to Daniel Auteuil, who shows as much restraint in his own performance as he does in how he handles the entirety of The Well-Digger's Daughter. It would have been easy to chew the scenery, Pascal is possessed of some justifiable anger, but the actor finds the right grooves in between, letting the heartbreak fuel, and ultimately supersede, the anger. As director and performer, Auteuil never gets overly showy. His preference tends toward the natural and honest, be it in how he relates behavior or how he shows the French countryside. The Well-Digger's Daughter was shot by Jean-Francois Robin (Metroland), and the cameraman maintains a steady hand, locking down the frame and letting the actors have their way within it. At the same time, the way he captures provincial France is gorgeous. The sunlight in the trees, reflections on the water, the grit of the workingmen--the detail here is sumptuous.

The Well-Digger's Daughter is a lovely film, one that will win you over by degrees. The story has its predictable elements, but Pagnol's original structure breathes more than the standard three-act screenplay would allow for. Auteuil takes his time with the individual moments, but the film never runs long. On the contrary, it passes by like a familiar breeze, one that quietly blows your socks off before you even realize how invested in the drama you've become. 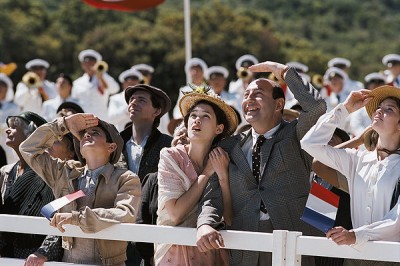 Video:
The Well-Digger's Daughter was shot at a 1.85:1 aspect ratio, and Kino Lorber has put it on Blu-Ray as a 1080p high-definition transfer. The image on the disc is wonderful, with lots of rich, visible detail. Skin tones look natural, and the rendering even allows for texture and fine detail--Auteuil's dirty face after a day in the wells, Azema's freckles, the look and feel of textiles. The color all around looks amazing, with the vibrancy of the outdoor photography achieving a particular luminance. There aren't a lot of dark scenes in The Well-Digger's Daughter, but Auteuil does frequently insert blank screens, and there is no visible crushing to the black, it's solid.

Sound:
The original French audio is mixed as a DTS-HD Master Audio 5.1 track. The presentation has nice balance, with emphasis placed on the dialogue. I didn't notice a lot of ambient sound, but Alexandre Desplat's score sounds lovely. The optional French subtitles are easy to read and written with style.

Extras:
Trailers and a stills gallery.

FINAL THOUGHTS:
Highly Recommended. The Well-Digger's Daughter is a fine drama from French actor Daniel Auteuil. For his directorial debut, the star has chosen to remake a classic morality play from master dramatist Marcel Pagnol. Astrid Bergè-Frisbey is radiant and compelling as the 18-year-old girl whose first blush with love brings unforeseen consequences. Set in the French countryside as war rages across Europe and Africa, the movie embraces its old-fashioned origins yet still feels vibrant and relevant, proving good stories about honest human endeavors will always endure, no matter the changing times. 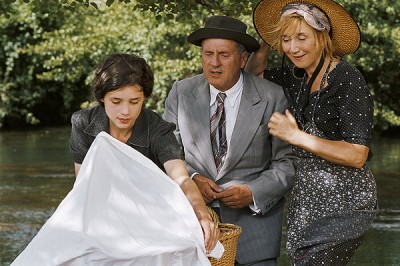