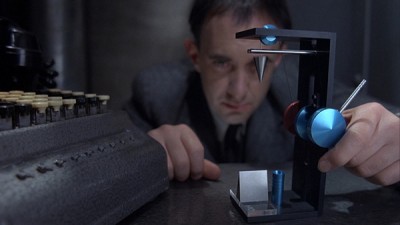 "Everything is connected all along the line. Cause and effect. That's the beauty of it."

In between finishing re-watching Brazil and starting this review, I tweeted, "One day I'm going to program a triple-bill of Blade Runner, Brazil, and Soderbergh's Kafka." It strikes me that all movies are of a similar piece: strange visions of an alternate world with shades of 1940s noir style, all three misunderstood, a trio of troubled productions where the film is regularly overshadowed by the respective failures and battles for creative freedom. That they all also involve a singular hero lost in bureaucratic nightmares of varying complexities, terrorist organizations, and, in the case of the B-movies, a woman who is going to be strangled in red tape, also doesn't hurt in terms of the grouping. (It's been a while since I've seen Kafka. I forget how exactly Theresa Russell's character figures in the plot.)

Brazil is Terry Gilliam's vision of a George Orwellian future, released a year after the author's 1984 predictions failed to come to pass. The film stars Jonathan Pryce (Glengarry GlenRoss) as Sam Lowry, a low-level clerk in the Ministry Of Information (moi?) with no aspirations to rise higher, despite strings being pulled on his behalf. Sam's dreams are of a different nature. He imagines himself as a winged warrior, soaring through the cloudy sky, challenging shadowy hordes of deformed creatures and a giant samurai made out of technological bits and bobs. Such dreams are not very lucrative, however; in this future, information is a top commodity, and when the government requires it from you, you are also required to cover the cost. So begins a plot where an accidental typo causes a man named Buttle to be wrongfully detained. When he dies in custody, Sam tries to make amends by delivering Buttle's refund check to the man's widow.

As many Kafka-esque heroes have found before him (as well, as Kafka's own; see also Joseph K. in Orson Welles' adaptation of The Trial), attempting to untangle a disorganized filing system only causes further complications and likely get your own personal file dropped down a round bin. Sam is suddenly on the other side of the line that divides his official, privileged world and the common man. There are organizations that resent the interfering government and terrorists who lash out at tyranny and mass consumption alike. One such agent of chaos is Harry Tuttle (Robert De Niro), a freelance repairman who circumvents official channels to fix Sam's heating system. He may also have been the man that was supposed to be on the arrest warrant instead of Buttle. Another new acquaintance of Sam's is Jill Layton (Kim Greist), Buttle's neighbor, a truck driver, and a dead ringer for the girl of Sam's dreams. Jill's been trying to clear Buttle's name, and now she's possibly marked for future arrest herself. If Sam can keep her out of the system, he can save her in real life the way he does in his fantasies. 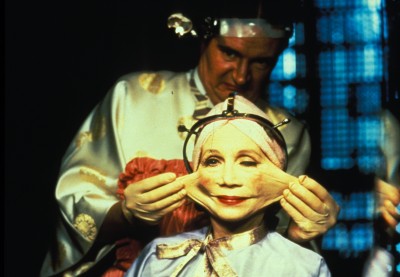 Gilliam rebuilds society from the ground up. His sci-fi imaginings are more in line with how futurists envisioned the oncoming world back in the 1940s, full of pneumatic tubes and criss-crossing wires. Computers are a hybrid of what systems were really like in the mid-'80s and classic typewriters. Men dress in suits, while art deco buildings scrape the sky. Women's fashion has grown outlandish, though even now we will recognize the quest for beauty through fad diets and cosmetic surgery as a wholly accurate identification of social trends. Sam's mother Ida (the excellent Katherine Helmond) allows her surgeon (Jim Broadbent) to push and pull at her face to smooth out the wrinkles, while her best friend submits to acid treatments that burn her flesh. Theirs is a world disconnected from the working man. It's a dichotomy we also see in living conditions. The poor live in rundown slums resembling disused factories. Beyond the city lines, life is more functional, less aesthetically pleasing.

Brazil's labyrinthine constructs are matched by the twists and turns of the screenplay, which Gilliam co-wrote with his regular script partner Charles McKeown (Plunkett & Macleane) and master playwright Tom Stoppard (Rosencrantz and Guildenstern are Dead, Shakespeare in Love). Sam must navigate the back streets and dark alleys along with the corporate structure of the Ministry of Information. The further he travels, the more the illusions fall away, even as the system tightens around him. As with the best Gilliam, Brazil is desultory and loud and often overwhelming. It's easy to overload on any one entry from the director's oeuvre. Yet, there is a purity to Brazil, a go-for-broke overabundance of design that smacks of ambition and naïveté. This is Gilliam before the system broke him, before the studio thugs gutted his dreams the way M.O.I. ultimately lobotomizes Sam. Most of the supplements on the Criterion editions of Brazil have been about the different permutations and the fight for the film, and the Blu-Ray is no different. It also includes the studio's version, which is considerably shorter than the approved director's cut. It's known as the "Love Conquers All" version, and lacks the visual bravado that concludes Gilliam's original, when Sam's romantic fantasies take over. The last section of Brazil is a surreal run through all that came before, like a mini remake of the entire film, a mad dash through Sam's psyche.

It's also a love letter to the creative spirit. Sam loves old movies, he surrounds himself in imagery from classic Hollywood. In a different version of his fantasies, he maybe fancies himself a celluloid hero. This is Gilliam's most realized irony: Sam actually is a celluloid hero. He is a noir detective, he is Hitchcock's wronged man, a pulp-fiction pugilist. He's not Humphrey Bogart, but maybe Dick Powell. Likewise, Brazil, with all its trials and tribulations, is a vibrant capsulization of cinema history, of Terry Gilliam's own bid for a star in the hall of fame, and all the heartbreak that comes with dreaming big. Brazil is its own self-fulfilling prophecy, audacious and mesmerizing and as fascinating today as it was nearly 30 years ago. 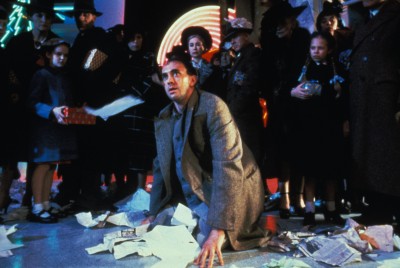 Video:
Criterion's new edition of Brazil features the expected high-definition transfer, presumably updated even from their single disc release of the film, struck from a 35mm source. The picture is shown at its original 1.78:1 widescreen aspect ratio, MPEG-4 encoded at 1080p. Overseen by Gilliam, the presentation here is exquisite, with an exceptional level of detail and beautifully varied colors. The film still shows its age at times, with minor instances of surface noise and a few scenes where the edges of the frame grow a bit warped, but the overall look of the transfer is strong. Shadows and gray fog alike look excellent, skin tones have a natural sun-deprived pallor, and the fantasy material really shines. In other cases, with other films, high-definition sometimes exposes the seams, spit, and glue used to hold old special effects together and removes some of the illusion. This is not a problem with Brazil. On the contrary, you can enjoy the remarkable art direction as never before.

Sound:
The original audio has been remixed as a DTS-HD Master Audio 2.0 surround track. For a stereo mix, this one shows a lot of depth and bombast. Folks who were hoping for the pomp and circumstance of a more complex multilevel remix should drop any such concerns. Brazil sounds fantastic, with the different elements parsed out for clarity and lots of boom and rumble in the loud scenes.

Extras:
This Blu-Ray release comes as a two-disc set, packaged in a standard-sized plastic case with a staggered tray. The accompanying booklet has pictures, credits, and a critical essay. The main disc features the full-length, 142-minute director cut along with the exceptionally candid and detailed audio commentary with Terry Gilliam. This is the same commentary from Criterion's original boxed set, issued in the mid-1990s, and indeed, the overall package here replicates that phenomenal collection.

Disc 2 is given entirely to supplements, including the 94-minute "Love Conquers All" cut of Brazil released by the studio. This comes with a commentary by David Morgan, who digs into the differences between the cuts and the why's of this version's existence. More of what happened with this alteration is explored in the documentary The Battle of Brazil, based on Jack Mathews' book about the production and hosted by the author. If there is one extra to watch, this is it. There is also a documentary by Rob Hedden, What is Brazil?, that was shot on-set and shows Gilliam at work.

More specific aspects of Brazil's production are zeroed out in the collection of featurettes that fall under the banner, "The Production Notebook." Six pieces in total, all of these were put together by David Morgan. The individual topics covered are the script, storyboards for unfilmed sequences, the production design, special effects, costume design, and music. All together, this section runs about an hour and twenty minutes.

Finally, we get the film's trailer

FINAL THOUGHTS:
Highly Recommended. Brazil is one of those rare cinematic gems that could not have been made by any other filmmaker at any other time. Terry Gilliam's 1985 rejiggering of the totalitarian future genre both looks forward and backward, imagining a nightmarish tomorrow while also paying a nod to classic sci-fi and the visual expressionism of film noir. As infamous now for its troubled history as for its awe-inspiring aesthetics and narrative constructions, this new Blu-Ray release reminds us that it's a film we like to continually pore over and dissect and question for a reason. It's fun, thought-provoking, and drop-dead gorgeous--even moreso in high-definition. Brazil is a place worth visiting again and again. 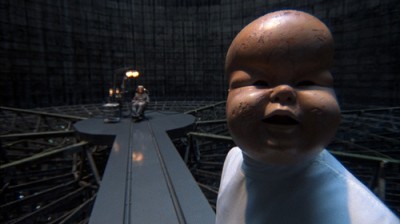