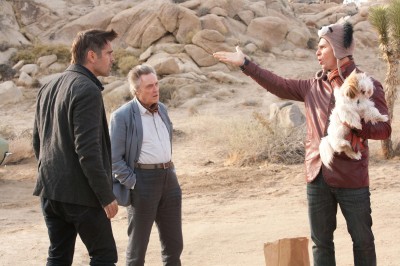 Martin is an alcoholic writer who can't get his script going. His best buddy Billy (Sam Rockwell) is an actor who can't get work, so he offers to help Marty with his screenplay in a seemingly dangerous way: by placing an ad in the paper, asking psychopaths to come tell their stories. But their brush with danger ends up coming to their door via Billy's other sideline: he helps Hans (Christopher Walken) kidnap dogs, which the older man returns for rewards. Good scam, until they steal the beloved Shih Tzu of a particularly unhinged crime boss (Woody Harrelson). That's when things get complicated.

The lines between fiction and reality are blurred from the pre-credit sequence, in which a pair of hitmen (unbilled Michael Pitt and Michael Stuhlbarg, doing a Boardwalk Empire mini-reunion) discuss the history of people getting shot in the eye; one mentions Moe Green, and the other insists that no, he's talking about "in real life." We chuckle, as we often do when fictional characters are unaware of their own fiction, but are aware of others. But McDonagh is setting up little moments of self-awareness throughout, since we're given the information about our lead character and his screenplay fairly early on, and thus the entirety of what we're seeing may well be the script they're talking about. So how will that inform where it goes?

McDonagh is keenly aware that we've seen philosophical kingpins and wisecracking killers plenty of times before ("It's not what I really wanna be writing about anymore," Marty notes), so there are simultaneously questions of meeting expectations and undercutting them; when Marty insists that "the first half should be a setup for an out-and-out revenge flick" but the second half should take the characters out into the desert for dialogue and "no shoot-outs," well, they say this as they're driving out to the desert, and damned if it doesn't seem possible that he's gonna do that very thing. I'm not saying he does; I'm saying it's possible.

But he doesn't short us on the other end of the bargain, either. Martin's line to the contrary notwithstanding, McDonagh appears to be having a very good time writing the (comparatively) straightforward chatty criminal stuff--Farrell and Rockwell are an especially inspired duo, fitting into each other's cockeyed rhythms with ease, and Harrelson puts together an energetic, live wire of a performance. And Walken, with a dandyish cravat around his neck and a twinkle in his eye, gets more than enough non-sequiturs to have his distinctive way with. My two favorites: when Martin asks if he drinks, he replies "I take peyote," and his apropos-of-nothing proclamation, "I think I'd have made a great Pope... I'm very lenient." There's not much in the way of women's roles to speak of, but the film's premise luckily allows that to be addressed, with the usual excuses (which is a pretty neat way out of that corner).

Like Cabin in the Woods in the spring, Seven Psychopaths is "meta" without being inside baseball--it's pitched at an audience that is youg, smart, and film-savvy. In other words, it's clever without being cutesy, or too intoxicated with said cleverness.