The Paperboy is based on a 1995 pulp novel by Pete Dexter, who Sacramentans may recognize from his Sacramento Bee column in the 1980s. The screenplay was written by Dexter along with director Lee Daniels.

The story takes place in a small Florida town during 1969. A sheriff is murdered one night and Hilary Van Wetter (John Cusack) is arrested for the crime but claims to be innocent. Newspaper reporter Ward Jansen (Matthew McConaughey) is prompted to return to his hometown to investigate the situation along with colleague Yardley Acheman (David Oyelowo), and stays at his home with relatives including his brother, the title character Jack (Zac Efron). Jack works for Ward's newspaper as a delivery person. Nicole Kidman plays Hilary's fiancee Charlotte Bless (she has somehow fallen in love with him even though she has only met him as a prisoner) who provides Ward with information to prove Hilary's innocence, and Jack meanwhile falls in love with her. The movie is narrated after-the-fact by the Jansens' housekeeper Anita Chester (Macy Gray), who has just written a book about the events. (As is typical of movies told in flashback, there are many moments that the narrator did not actually witness but somehow knows enough about to include anyways.) 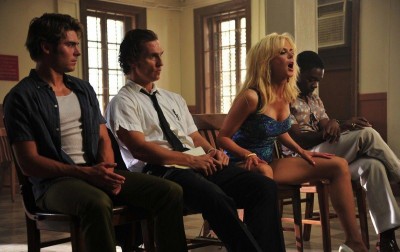 The Paperboy includes a number of odd scenes, including one where Hilary is visited in jail by the reporters and Charlotte, where they watch as Hilary and Charlotte have contact-less sex before Hilary is dragged back to his cell. Another memorable scene is where Jack is stung by jellyfish while swimming in the ocean, and Charlotte urinates on him in order to lessen his injury. And yes, Jack and Charlotte do end up in bed together eventually, though little is shown before going to the next scene. (Nicole Kidman has joked that she "made a man" of Zac Efron while shooting this movie.) 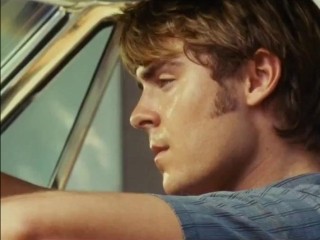 Having first seen Efron in High School Musical (yes, I unashamedly admit to being a fan of that series) it has been interesting to see him take roles that distance himself from his "teen idol" image while rejecting those (such as the lead in last year's Footloose remake) that would have kept him there. Matthew McConaughey continues to be versatile here, and it's interesting to see John Cusack in a creepy role as the accused killer. I honestly did not recognize Nicole Kidman until her name showed up in the end credits. She appears very different than in her previous roles, and adopts an authentic-sounding Southern accent. 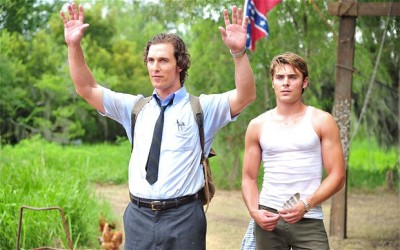 The Paperboy was shot on Super 16mm film and presented in a 2.35 aspect ratio. Picture is very clean with a bit of film grain. Color is rather light with a slight brownish tint to most shots.

Audio mixes in 5.1 Dolby TrueHD and 2-channel Dolby Digital are included. The 5.1 mix is nothing special, with minimal use of surrounds but many scenes include some lesser-known pop songs of the period in the front left and right. (One flaw in the movie is that Al Wilson's "Show and Tell" is used in one scene and in the end credits- the movie takes place in 1969 but this song was recorded in 1973.) Mario Grigorov provides an effective piano-driven musical score. I sampled a bit of the movie's 2-channel mix and ambient sounds appeared more prominent there than in the 5.1 mix.

Subtitles in English "SDH" style and Spanish are included.

A 6-minute featurette (in 16x9 standard-def with 2-channel sound) is included with director Lee Daniels, producer Hilary Shor and the main cast members discussing the movie interspersed with clips. Longer interview footage where the comments in the featurette were taken from are included as separate menu options. Then there is 7 minutes of raw footage of the shooting of a few scenes. The theatrical trailer (in high definition with 2-channel sound) is also included.

The disc opens with trailers in high definition and 2-channel sound for Stolen, Bernie, So Undercover (with mono sound) and Little Birds, which are also selectable from the menu. 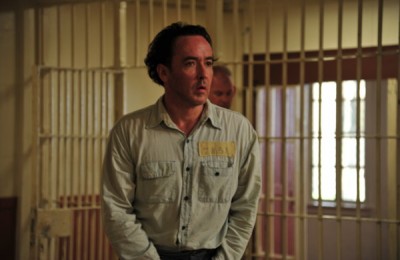 The Paperboy is a memorable thriller with some unique performances by the lead cast. Zac Efron continues to prove that he can do more than sing and dance- it will be interesting to see what he appears in next. There are plenty of surprises in this movie that will call for repeat viewings.

(Pictures in this review were not taken from the Blu-Ray disc.)