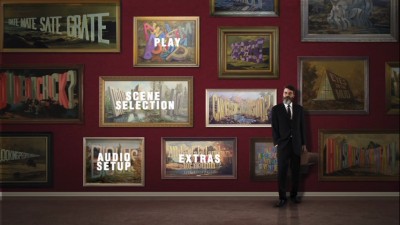 Wayne White is a painter, puppeteer, musician, and production designer who has worked in fine arts and on television. Even if you don't know his name, you most likely know his work. Most of it is covered in some capacity in Neil Berkeley's documentary Beauty is Embarrassing: The Wayne White Story, and the more credits that get rattled off and artifacts that get shown, the more astonished you are likely to become. Wayne White has been all over the place, you just didn't realize it was the same guy.

You ever watch Pee-Wee's Playhouse? White was an integral member of the design team and one of the puppeteers on the show, including doing the voices for Randy and Dirty Dawg. He's got three Emmys from his time in the Playhouse.

White doesn't work in TV that much anymore. After a few years struggling on more kid's shows like Shining Time Station and looking for his niche, he transitioned into fine art. He still makes puppets of various sizes and styles--including a giant Lyndon Johnson head that he wears in several scenes in Beauty is Embarrassing and an even bigger animatronic George Jones noggin that's in a Texas museum--but they now hang in galleries rather than from strings on a stage. White is most known for his "word paintings" now. The concept is fairly amusing and kind of ingenious. He buys landscape paintings from thrift stores and incorporates phrases and words into the already existing image. Some of these are profane, a curse word sprawled across an idyllic outdoors scene; others are more elaborate. They are usually funny, but also thought provoking. The title "Beauty is Embarrassing" comes from a slogan he painted on an outside wall of a museum in Florida. 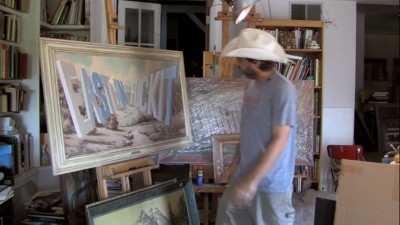 The documentary weaves us in and out of White's past and present. Using a one-man show he performed at Largo in Los Angeles as a throughline to string the narrative together, we get to know more about Wayne's art, and he divulges his history and his process. We watch the Southern boy move to the big city, meet the girl of his dreams (shown via a cartoon using his wife's comics), pursue his passions, and find success and failure along the way. Interviewed for the film are friends and admirers, including Paul Reubens (the once and future Pee-Wee Herman), cartoonist Gary Panter, musician Mark Mothersbaugh (Devo), fashion designer Todd Oldham, directors Valerie Dayton and Jonathan Faris (Little Miss Sunshine), and Simpsons-creator Matt Groening. (Fun fact: White's wife Mimi Pond wrote the first ever Simpsons, the original Christmas episode.)

White is always the star of his own show, however, and it's his storytelling that really propels Beauty is Embarrassing. His presentation is humorous, but also ripe with nuance. As much as White cuts up, there is always an honesty cutting through whatever anecdote he is sharing. He admits to his bitterness and his mistakes, and also reveals a keen awareness of how other people perceive him and the way relationships evolve. There are times when he's certainly performing for the camera, and yet it never feels as if his guard is up. Life is a performance for Wayne White, the universe is one big art prank, and this movie is one of the most pleasantly enjoyable documentaries about the creative process I've seen in a good long while. 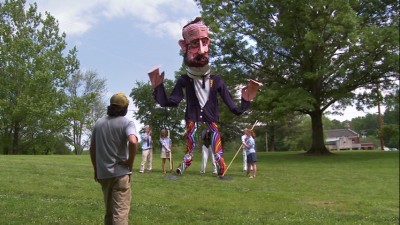 Video:
The widescreen anamorphic transfer for Beauty is Embarrassing is nicely handled. Material comes from a variety of sources, old and new, and a good job is done to make the whole presentation come across as seamless. Modern footage, particularly of White's live show, looks excellent. Resolution is good and the colors look natural.

Sound:
Though the DVD boasts a 5.1 Dolby Digital mix, the soundtrack really never calls attention to itself. There isn't a lot of ambient noise in play here--though when White goes out to the country, we do get a little taste of what it must sound like out there in the great wide open. Otherwise, the film is mostly talking, and the appropriate attention is paid to make sure we can always hear the subject clearly and distinctly. Music sounds good and loud when it comes up, including White's own performances, which have a lovely clarity.

Extras:
Docurama has made a nice package for Beauty is Embarrassing, including an outer slipcover for the plastic case. Inside the case, there are three miniature prints of three different word paintings, as well as a reprint of the cover that serves as an advertisement to buy more Wayne White product.

On the disc, White and director Neil Berkeley sit down for a full-length audio commentary. It's a chatty discussion and really opens up what we are seeing. There is so much to explore in White's world, every door leads to something else, and an 88-minute film can only show so much history. The commentary works as a nice supplement to that. 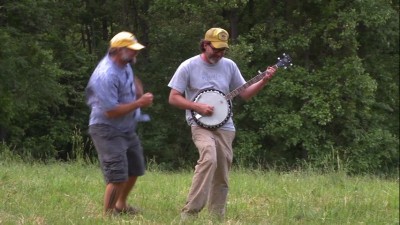 To further showcase White's creations, we get a slide show gallery of his paintings, and also an unedited performance of the one-man show featured in the documentary. Highlighting Wayne's musical capabilities are a full performance of the song "Blue Ridge Mountain Blues," as well as a second performance from his friend Mike Quinn (whom White visits and collaborates with in the film), singing "Country Boy in Paradise."

Three deleted scenes include setting up the one-man show, which was at Los Angeles' infamous Largo; a look at how to make a word painting; and a bit about Mike Quinn's car.

FINAL THOUGHTS:
Highly Recommended. Beauty is Embarrassing: The Wayne White Story could have alternately been titled Portrait of the Artist as Young-at-Heart Rebel. Wayne White is an interesting personality, a multi-faceted creative whose unique style has left an indelible mark on the pop culture of the last three decades. From Pee-Wee's Playhouse to MTV and now into the fine art world, White has done it all and maintained a healthy attitude and a persistence of vision, all the while never taking the world or himself too seriously. Take a gander at Beauty is Embarrassing and finally put a name to a bunch of cool things you've enjoyed over the years, never knowing it was the same guy doing them all. 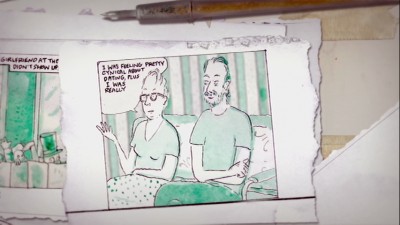