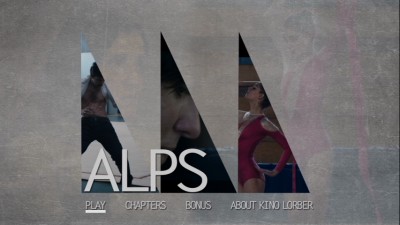 It can be difficult to get at what makes the cinema of Greek director Yorgos Lanthimos work. His efforts are purposely mysterious, his scenarios disconnected from the real world, the characters placed in a vacuum tube where they live their lives separate from what is "normal." As with his stunning 2009 debut Dogtooth--which, had it won the Foreign Language Oscar is had been nominated for, might have been the most subversive best picture winner in the history of the ceremony--Lanthimos' follow-up full-length, Alps, takes very little time to explain itself. Part of the experience is not really knowing the hows and whys of the things you are seeing, it's your job to take notes and keep up.

For this reason, it's also hard to put one's finger on why Alps, though very good, doesn't work as well as is predecessor. Is it the sophomore slump, or do we require more as the initial bloom fades? Or could it be that Dogtooth was so shocking, so disturbing, that something more heartfelt and quiet like Alps is going to pale in comparison regardless? Perhaps that means the act of comparison itself is simply unfair.

The concept at the core of Alps is actually fairly easy to explain. Four people from various walks of life have formed a "group" where, for a fee, they replace dead loved ones for their clients. It's not a 24-7 job, but instead they visit the families at prescribed times, reliving key scenes from their lives, ostensibly easing the pain during the transition of grief. The leader of the group (Aris Servetalis) is an EMT, and he goes by the nickname Mont Blanc. All four of the performers have similar monikers, named for the famous mountain range. Blanc picked the handle for the organization both because it said nothing about their business, thus masking them from any outside suspicion, and because, as he explains, no other mountains can stand in for the Alps, but any one of the Alps could replace any other mountain around the world. So, too, can they do their job, but no one else can do what they do. 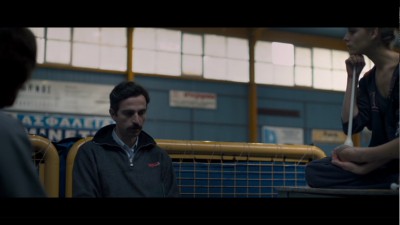 We never know how these four were called to this particular duty, or even entirely how they got to know each other. Lanthimos' script, co-written with his writing partner Efthimis Filippou, is purposely vague. Alps is already 1/3 over before it even becomes clear what exactly is going on with these people. For all intents and purposes, our focus character is Anna (Dogtooth's Aggeliki Papoulia), a nurse who works for the same hospital as Mont Blanc. She takes the nickname Mont Rosa. Rosa lives with her widower father and is his primary caretaker. We also see her acting as a visiting nurse for a blind woman while her colleague, Matterhorn (Johnny Verkis), a gymnastics coach in his regular life, stands in for the woman's missing husband. (Matterhorn's teenaged pupil, played by Ariane Labed, is the final member of the Alps. I never caught her alias.)

Mont Rosa's has two other current assignments, both of which begin to take an emotional toll on her. One is playing the wife of a lamp salesman who lost his spouse because she refused to manage her diabetes; the other is standing in for a young tennis player who died in a car crash. In both instances, Rosa begins to identify and invest too much in the role playing. She first breaks the rules by having sex with her fake husband, and then does so again when, after her session is over, she takes the tennis player's adolescent boyfriend home with her. As we watch, it slowly dawns on us that we are witnessing a woman in a downward spiral. Is there a deeper hurt that drives Anna/Rosa? Did she join the Alps as a way to mourn her dead mother? Part of her rock bottom includes trying to impersonate the woman, a Freudian scenario that is met with appropriate anger by her dad. If she can't be Mont Rosa, and in turn be these other people she has been hired to impersonate, Anna has no identity at all. 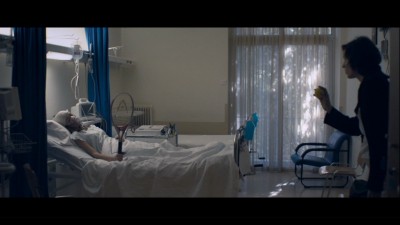 There is an element of conjecture in evaluating all art. Whenever we see a film, we bring a little of ourselves to the process, filling in certain blanks, reacting to the movie on an emotional and intellectual level based on who we are and how the material effects us. Even so, most filmmakers will try to provide a clear path to their intentions, a trail of breadcrumbs to lead us out of the woods; not so with Yorgos Lanthimos. He's made sure to sweep up as many crumbs as he can before we ever set foot on the trail. As an artist, he wants us to make inferences about his work. Though a semblance of a narrative emerges, and we begin to discern who the characters are via their actions and reactions, there's never going to be a point in his movies where the proceedings halt for exposition or monologues. What you will take away from Alps is equal to what you are willing to bring in.

And the film succeeds for the most part, mostly because Lanthimos has a solid grasp on what it is he wants to do. There is never a point when it feels like he's showing us anything at random. A sudden burst of violence in the final act, for instance, doesn't appear to be included haphazardly; it has purpose. Alps has been beautifully shot by Chistos Voudouris and tightly edited by Yorgos Marvosaridis, working under the guiding hand of the big boss. Likewise, the actors deliver performances that are perfectly in rhythm with the pulse that drives Lanthimos' narrative. The two ladies, in particular, show an incredible range of emotion. (A scene where the gymnast nearly kills herself is harrowing, largely because of the devastation evident on Ariane Labed's face.) There's so much confidence in every frame of Alps, there seems to be little reason not to give it your trust.

At the same time, at least on first viewing, the movie doesn't have the concluding impact I think it requires. Again, it might be unfair to compare it to Dogtooth, but when that movie ended, I remember being caught short by what I had just seen. I was intrigued and elated. Alps, on the other hand, more or less just fades to black along with its central protagonist without eliciting a visceral response, at least not from this viewer. Perhaps this is by design, and Alps is meant to be a slow burn, its effect increasing the longer I live with it. Only time will tell, I guess. 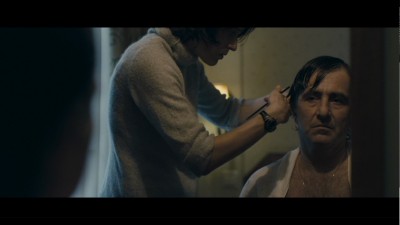 Video:
Kino/Lorber brings Alps to DVD in its original 2.35:1 widescreen aspect ratio. The overall picture is decent. If I were to nitpick, it lacks sharpness, and there are some instances of clear aliasing. Color timing appears to be correct, however, and there are no scratches or damages to the surface image.

Sound:
The original soundtrack for Alps is in Greek, and it's presented here as a stereo mix with English subtitles. The audio works fine, there is nothing either wrong with it or notable; the subtitles, however, are kind of small, and could be knocked up a font size or two. It should also be mentioned that they are embedded and cannot be turned off.

Extras:
The film's theatrical teaser and also the full-length trailer.

FINAL THOUGHTS:
It's a cliché that some films are not for everybody. It's also a fallacy, because everything is going to be hated by someone. That said, a whole lot of you are really going to hate Alps. If you don't like movies that willfully confound and obfuscate, then you probably have chosen the wrong review to read, because I'm giving Yorgos Lanthimos' second full-length a Recommended. This bizarre story of people who serve as stand-ins for lost love ones, easing the grieving family into life without the recently departed, is long on strangeness and short on clear explanations. It does, however, seem to have a sure sense of self and at times is practically overflowing with emotion, even as the drama remains understated. Go into Alps expecting few answers, but be armed with plenty of questions. 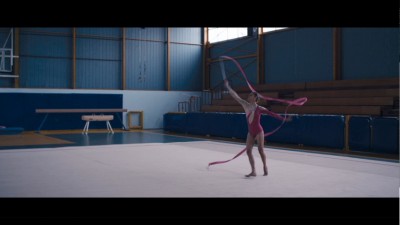