Fox // Unrated // January 15, 2013
List Price: $24.99 [Buy now and save at Amazon]
Review by Stuart Galbraith IV | posted February 13, 2013 | E-mail the Author
A landmark social problem film about anti-Semitism, Gentleman's Agreement (1947) was quite controversial in its day, so much so that, famously, the Jewish moguls at the other studios, fearing a backlash, tried talking gentile Darryl F. Zanuck out of making it. But the film was made and it went on not only to win three of eight Academy Award nominations, including Best Picture and Best Director, it was also 20th Century-Fox's top-grossing movie of 1948.

Through the years it has remained an emblematic movie of its time, made as it was during a period when Fox especially was willing to tackle heretofore-taboo subjects. Even if you've never watched the whole thing at one time or another you've probably seen its most famous scene, where undercover writer Philip Green (Gregory Peck), a gentile pretending to be Jewish, is not allowed to register at a restricted hotel, despite having made a reservation there weeks in advance. (Something similar happened to Zanuck when he was refused membership at the Los Angeles Country Club. Everyone assumed the Protestant Zanuck was Jewish.)

Today Gentleman's Agreement seems much less revolutionary than it was in 1947. It's dramatically clunky in some ways and more than a little obvious in others, faults even its director, Elia Kazan, later acknowledged. But the acting is good and the squirmily uncomfortable situations Green finds himself are still powerful. Dean Stockwell (Quantum Leap, Battlestar Galactica), about ten years old at the time, plays widower Green's young son, Tommy, and watching the film again it struck me that, for all its faults, this is a movie all 10-year-olds should see.

Fox's Blu-rays of 1.37:1 black and white movies from the forties and fifties have been a mixed bag, with titles like Miracle on 34th Street (also 1947), All About Eve (1950), and The Day the Earth Stood Still (1951) several big notches below the best Blu-rays of standard screen shape, monochrome films. Happily, Gentleman's Agreement improves on all of those, with a crisper, less washed-out image throughout. Extras dating back to an October 1999 DVD release round out the package. 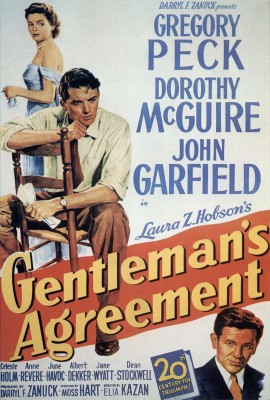 Adapted by Moss Hart from Laura Z. Hobson's bestselling novel, the story begins with Philip Green (Peck) moving to New York with his son, Tommy, and mother (Anne Revere) to accept a job at a liberal-leaning magazine published by John Minify (Albert Dekker). Minify wants Green to write a piece on anti-Semitism but Green is dubious about its prospects. That story's been done already, he argues and, besides, any decent writer can pull together a lot of facts and figures about that particular problem. Minify, however, is looking for something altogether different.

Green is ready to throw in the towel when he's inspired to adopt a fictitious Jewish identity, his real religion known only to Minify and Minify's niece who suggested the piece in the first place, divorcee Kathy Lacey (Dorothy McGuire). Green and Kathy, she from a moneyed, liberal family, begin dating and soon become engaged.

The ruse is a complete success, and even at Minify's liberal magazine, word of Green's Jewishness spreads like wildfire and he begins to experience subtle and not-so-subtle prejudice around town.

The film touches upon this in interesting ways. Green's secretary, Elaine Wales (June Havoc), reveals to her new boss that she's also Jewish. She sent two job applications to magazine, one under her real name, Estelle Wilovsky, which was rejected outright, while the second, as "Elaine Wales," easily won her employment. Green reports this hypocrisy to an appalled Minify, but Wales is concerned a more open policy might only cause problems for "passable" Jews in the office if the "wrong kind" get hired.

Green's childhood friend, Dave Goldman (John Garfield), returns from the war looking for a job and housing in New York (this during a housing shortage) but is fatalistic about his chances. Outwardly, after a lifetime of experiencing bigotry, Dave appears resigned to its inevitability, but when a couple of ex-servicemen (Robert Karnes and dancer-actor Gene Nelson) call him a "yid" he nearly beats them to a pulp, and is only barely able to control his suppressed rage.

Green's romance with Kathy at first plays like a conventional romantic subplot to offset more daring material, but instead it cleverly becomes the core of the picture's theme. Her liberal views are tested when, due to her engagement to Green, she becomes an uneasy participant in his deception. At a party at the family home in the restricted Darien, Connecticut, where Green is to be introduced to her family and friends, she wants him to tell everyone that he's only pretending but he refuses. When Dave is unable to find housing in New York, Green suggests letting Dave use Kathy's unoccupied cottage in Darien. She tries rationalizing her way out of saying yes, arguing Dave would never be happy living among so many prejudiced neighbors, but it's clear the real reason is that she's more concerned about offending them rather than in assisting Dave. (At the party Jane Wyatt, in a curiously tiny part, plays Kathy's sister. It's good casting: she and McGuire strongly resemble one another at that point in their lives.) In the film's best scene Tommy arrives home emotionally shattered after being subjected to Jewish epithets by fellow classmates, prompting Kathy's revealing attempt to comfort him, "Oh, darling, it's not true. You're no more Jewish than I am. It's just some horrible mistake!"

Gentleman's Agreement works best when the focus is on these intimate, personal conflicts. Peck, McGuire, Havoc, and (of course) John Garfield are all excellent, as is Celeste Holm, in an Oscar-winning performance as one of Green's few unprejudiced colleagues. The movie is less successful in depicting the writing process, which movies almost never do well. Green struggles with the unappealing assignment handed him, consulting with his mother, furrowing his brow and generally looking stumped. The epiphany finally shows itself ("I know! I'll be Jewish!") and he's on his way, but none of this is believable, especially considering his character had previously gone undercover as an "Okie" and as a coal miner for past assignments.

Peck's scenes with Dean Stockwell are quite good, mostly because the latter was an unusually natural child actor. Conversely, Anne Revere, better in other films, notably her similar role in the John Garfield Body and Soul (also 1947), is given all the polemic dialogue, including a near-ludicrous speech at the end.

On the other hand, the film is quite daring in actually identifying by name several anti-Semite public figures and wealthy communities known for their prejudices and restrictions against Jews, something movies even now are loathe to do.

As noted above, Gentleman's Agreement improves markedly upon earlier, disappointing Fox Blu-rays of standard size, 1.37:1 black and white movies. The image is crisper with more fine detail visible. Blacks and contrast are vastly improved over those earlier releases. The Region A disc offers fine 1.0 DTS-HD Master Audio, along with Spanish and French audio options, and subtitles in English and Spanish.

Fear of a backlash by Hollywood's Jewish moguls was not entirely unfounded, though they never could have imagined that they themselves would soon be facilitating this backlash themselves. Not long after the film's release, the House Un-American Activities Committee called Zanuck, Kazan, Garfield, and Anne Revere to testify. Garfield and Revere were blacklisted, and Kazan eventually named names to save his career.* The issues addressed head-on in Gentleman's Agreement haven't gone away, they've just taken new forms, and for that reason this intelligent, sincere, and still-powerful film is a must-see and a DVD Talk Collector Series title.

* Reader Sergei Hasenecz adds, "There is no doubt that anti-Semitism, as well as anti-Communism, motivated a surprising amount of the House Un-American Activities Committee's actions. Half of the Hollywood Ten were Jewish. HUAC was specifically looking for a major liberal/left-wing Jewish-American movie star to make an example of, and on their list were Edward G. Robinson, Danny Kaye, and John Garfield. Garfield was chosen as the most likely target. Despite his connection with the Group Theater, Garfield was no Communist. (In his own words before the Committee, "I am a Democrat by politics, a liberal by inclination, and a loyal citizen of this country by every act of my life." You can bet that statement did not endear him to HUAC.) His wife, however, had been a member of the Communist Party. Garfield refused to cooperate when called before the Committee. He was afterward visited by the FBI which hoped to pressure him into giving names. When Garfield again refused, the FBI agents showed him his wife's Communist Party membership card. Garfield's response to the agents was both brave and succinct: 'Fuck you!'"