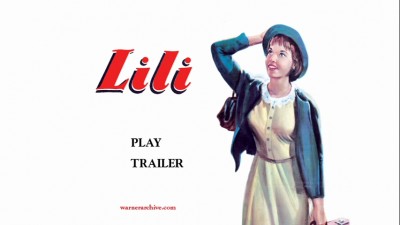 The 1953 musical Lili is a pleasant vehicle designed to showcase Gigi-star Leslie Caron. The French dancer plays Lili Daurier, a naïve country girl who, having lost both her parents, ventures to the city in search of a new life. Her initial plans don't work out, but when a handsome magician (Jean-Pierre Aumont, Hotel du Nord) plays the white knight, Lili falls for his illusion and follows him back to the carnival. There, another performer, a troubled puppeteer named Paul (Mel Ferrer, War and Peace) gives her a special puppet show to try to cheer her up. Seeing how good she is with the puppets, Paul decides to offer her a job playing frontwoman for his act. Unable to admit that he loves her himself, and finding it impossible to steer Lili away from the magic man, their performances become Paul's only outlet to describe how he feels.

That is the long and short of the plot of Lili, which is alternately a rather dispassionate love story and a somewhat music-less musical. Easter Parade's Charles Walters directs from a script by Helen Deutsch, who was also the writer for Walters' version of The Unsinkable Molly Brown many years later (not to mention a screenwriter on the original Valley of the Dolls). Together they strive to give Lili the trappings of a fairy tale, placing their heroine in an environment where things are never what they seem as part of the design. It's a pretty good idea, only they don't go very far with it. The carnival lacks color, and the love story lacks fervor.

For a musical, Lili is also pretty short on music. Bronislau Kaper (Auntie Mame) won an Oscar for his score, and there is no denying that the music is intoxicating, but it seems odd that there is only one song in the whole movie, "Hi-Lili, Hi-Lo." There are also only two dance numbers, but once you see them, it starts to become obvious why Lili is still popular. They are both very imaginative. Each one takes place in Lili's head as she daydreams about different romantic scenarios. The first sees her as a waitress dancing in the audience of the magician's show; the second is the film's finale. It's Leslie Caron dancing with the human versions of the four puppets from Paul's show--a redheaded joker, a thieving fox, a beautiful woman of the world, and a shy giant. Each represents a piece of Paul's personality, and the key to Lili finally falling in love with him is her figuring out which of these pieces makes up the most of the man.

Leslie Caron is most alive when the dancing starts. Her coquettish persona doesn't seem quite so strained. (She was 22 at the time, and this was only her fifth movie; her debut in An American in Paris had been three years prior.) She is lovely to look at, but she regularly appears lost, and not always as part of her character. Caron needs a strong leading man to, well, lead her, and Mel Ferrer just isn't up for the job. He overdoes the bottled-up routine here, though judging by how Walters directs them in the non-musical scenes, it doesn't appear to be entirely his choice. The director often seems to choreograph the lovers in the frame as if the whole movie is a dance, making Ferrer look more than standoffish. He looks like he's trying to stay on his mark, as if he's waiting for a cue that never comes. Caron has better chemistry with both Aumont and Ferrer's sidekick, the genial Kurt Kasznar (who was also in the original Casino Royale).

Even with all those complaints, there is something undeniably likable about Lili. Its main elements never fully come together, but those elements are at least unique. It's almost as if the real Cinderella here is the movie itself, and our investment is really in hoping that it will turn into everything we think it can be. That it does so in the final dance with the puppet people is oddly pleasing. You kind of want to slap the film on the back and give it an, "Attagirl!" 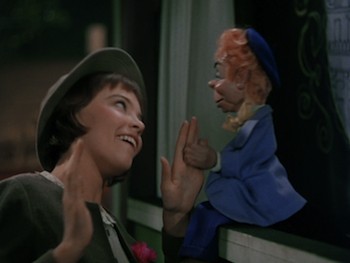 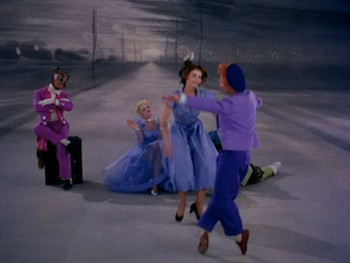 Video:
Lili is released as part of the Warner Archive movie-on-demand program. The film is framed at its original 1.33:1 aspect ratio, and it's in full color. The transfer is average in terms of cleanliness, but maybe slightly lower in terms of overall presentation. Colors appear muted, and the general resolution can be a little worn. Fuzzy edges and slight hints of ghosting occur regularly.

Sound:
The mono soundtrack sounds fine. The audio is free of distortion and everything sounds clear, if a bit flat.

FINAL THOUGHTS:
Recommended. I know I took a lot of knocks at Lili in my review, but even with all the complaints, I still enjoyed myself watching it. Leslie Caron is a lovely dancer, and the carnival setting works really well. I liked the idea of the puppet show and how it's used as a means of communication, and I particularly liked the dance finale where the puppets essentially come to life in Lili's fantasies. I just wish there was more heat to this thing, and definitely could have stood for a better leading man. Still, if you like Leslie Caron and like musicals, Lili is worth an evening of your time, even if you just end up dreaming of all it could be with a little extra love and ambition. 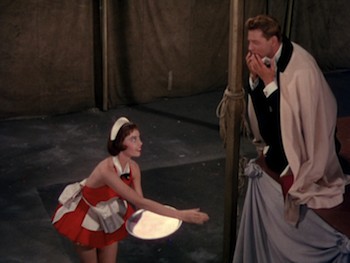 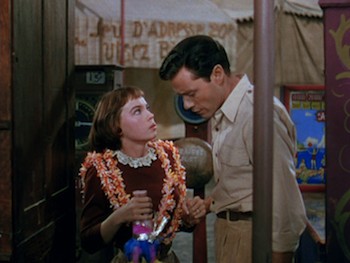