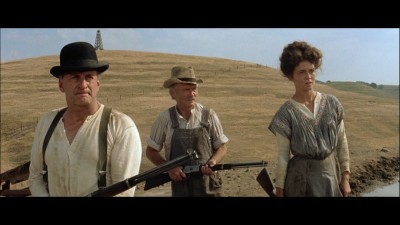 Stanley Kramer's 1973 oil-rig western Oklahoma Crude loads quite a few interesting ideas into a rather simple plot. Set in the early 1900s, the film stars Faye Dunaway as Lena Doyle, a headstrong feminist drilling on her vast acreage and doing it on her own, staving off corporate interest and masculine doubt alike. She knows there is plenty of the good black stuff beneath her property, and if she can just hold out long enough, she can strike it rich before any man can tell her what to do.

It's a noble plan, but one that may be easier said than done. Her estranged father (John Mills) is worried that the fight is bigger than his daughter--or any one person, regardless of sex--can handle, and ignoring her protestations, he tries to hire some men to aid her in the coming battle. Most of the guys he approaches are too sensible to go against Big Oil, but one man decides he has nothing better to do and signs on. Mase (George C. Scott) figures that there is money to be had somewhere in this scheme, and if it comes down to it, he can play both sides against the middle. His lack of dedication proves to be an Achilles Heel, however, when the oil company bruisers come calling. After Lena turns their leader (Jack Palance) down flat, they beat her and Mase to a pulp and throw them off the ranch.

The second half of Oklahoma Crude details how Mase, Lena, and her father push back, and how they maintain the land once they regain control. It also explores the tentative romance between the roughrider and his lady boss. This proves to be the most interesting aspect of Marc Norman's script. (Norman also wrote the original The Killer Elite and Cutthroat Island.) Lena has spent long enough doing things for herself, she's not ready to give in that quickly when men come around, no matter how far they extend their helping hand. There is an excellent scene between Scott and Dunaway where he tries to get to the bottom of her philosophy on gender, and Lena explains that she'd prefer to be a third sex, possessed of both male and female genitalia, able to serve her own needs without aid of anyone else. Naturally, Mase is confused by this point of view, but he rolls with it. To each their own. 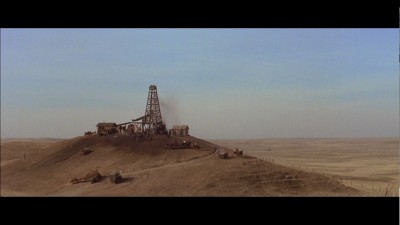 The bond between the two deepens after Palance and his men attack. Mase is genuinely sorry for his lack of a moral backbone, and he sets about regaining his honor. The more he and Lena struggle together, the closer they get. The same goes for Lena and her father. Kramer, who previously directed such films as Guess Who's Coming to Dinner and It's a Mad Mad Mad Mad World, doesn't go in for the usual sentimental stuff, however. There are no big reconciliations or passionate demonstrations; rather, love grows as a makeshift necessity. The seeds are mutual respect, the fertilizer shared tragedy, and Lena never abandons her ideals, or even her self-sufficiency, in trade for masculine comfort. Both Dunaway and Scott are fantastic. They are perfectly natural on screen, and Dunaway in particular is more dialed back than she was in some of her more famous roles (Bonnie and Clyde, Network). She is more than believable as a woman who gives as good as she gets.

Kramer stages the action on a wide surface, showcasing the open territory where Lena has laid down her roots. This is not a romanticized version of the frontier, but rather one fitting more with the general look and tone of alternative 1970s westerns, such as McCabe and Mrs. Miller, or the early revisionist cowboy pictures like Peter Fonda's The Hired Hand. At the same time, when it comes down to delivering the climax, the director isn't afraid to please the crowd. Once oil is struck, the tone becomes more old-fashioned, with Henry Mancini's music growing increasingly whimsical and rousing as the opportunistic oilmen come rushing to bathe in that black gold. It's a calculated move, raising the audience's excitement level to prepare us for the bittersweet comedown that follows. Like his heroine, Stanley Kramer doesn't sacrifice what he built for a cheap payoff, instead staying true to Oklahoma Crude's underlying themes, and thus the film is all the more satisfying for not selling out for cheap thrills. 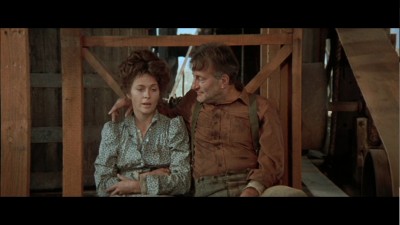 Video:
Oklahoma Crude is part of the Sony Choice Collection, their manufacture-on-demand initiative. The no-frills widescreen transfer is decent, with a clear picture that, despite its soft edges, presents an accurate representation of the original 1970s photography. Colors are muted, but in a natural manner that seems intentional. There are lots of blacks, grays, and browns in Oklahoma Crude, and though not being the sort of crisp image we expect in a high-def world, the transfer here strikes me as suiting the period film stock and the general palette of the early 1970s.

Sound:
A very basic two-channel mix presents a centered audio soundtrack, free of glitzy effects but also lacking in any glitches, hiss, or other distortions.

FINAL THOUGHTS:
Recommended. Stanley Kramer's semi-revisionist cowboy picture Oklahoma Crude marries progressive 1970s politics with good old-fashioned oilfield adventure. Faye Dunaway stars as a feminist frontierswoman standing up against the big oil corporations who would steamroller over her and take her land. Backing her up is George C. Scott as a hangdog hired gun, and Jack Palance stars as the calculating bad guy. It's a fun movie with neat ideas, even if the plot is a little anemic, and admirable for how it stays true to its core concept right up to the very end. 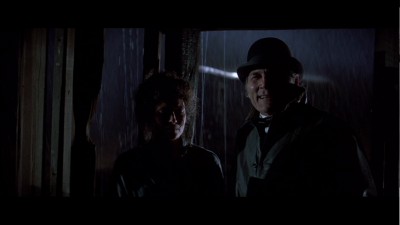