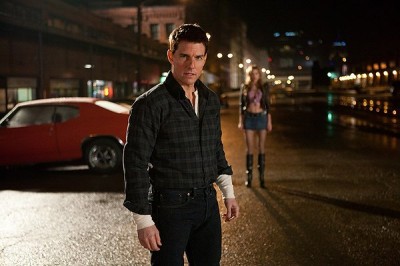 For Christmas, e-mail your father and tell him to go see Jack Reacher. He'll thank you. It's a movie that seems perfectly designed for dads. That's not meant as an insult either. As someone who grew up around Charles Bronson and Sylvester Stallone movies, and watching cop shows and westerns with the old man, I have an appreciation for the sort of no-nonsense action yarns of yore. Jack Reacher is like The Bourne Identity in its single-minded focus on plot, but lacking the pseudo-science Black Ops mumbo jumbo.

Tom Cruise stars in the film as Reacher, a former military police officer who has been living off the grid since returning from Iraq. After an ex-sniper whom Reacher had some contact with in the field is accused of opening fire on a crowd of random victims in Pittsburgh, Reacher re-emerges to make sure justice is done. What initially looks like an open-and-shut case is anything but, not once our hero starts really looking at the details. The fact that someone is trying to dissuade Reacher from digging deeper also sets his Spidey sense tingling. Everything is too clean, right down to the fact that the prosecuting district attorney (Richard Jenkins) and the defense attorney (Rosamund Pike) are father and daughter.

Some of these details, admittedly, might also be a little too perfect for the audience to accept at first. Jack Reacher hits the ground running, offering very little back story and putting all the pieces in place with surprising expediency. That is part of what makes it work so well, though, there is an efficiency to the design of this thing. Jack Reacher is a character from a series of books by author Lee Child. They belong in a genre that is sometimes called "airplane novels." These are the kinds of paperbacks you see in airport book stores, the sort of page turners that suck you in and make you forget you're trapped in a giant metal tube rocketing through the sky. While I've never read any of the Reacher books, I've read others in this category, and there is something about the unadorned prose and the fast-paced plotting that undeniably works. I've often had occasion where I wished the flight was longer so I could keep reading rather than pause my consumption of the tale. 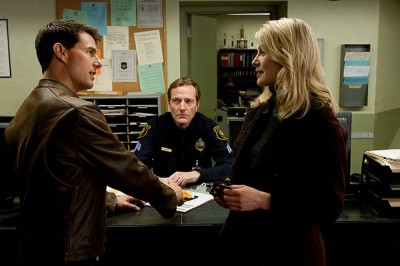 It's that quality, that lack of fuss and the kinetic advancement of narrative, that writer/director Christopher McQuarrie captures so well in Jack Reacher. McQuarrie is the Oscar-winning screenwriter of The Usual Suspect, whose only previous directorial effort was the cult hit Way of the Gun. His work here strikes the appropriate balance between taking the material seriously enough to satisfy fans of the books while having just enough of a sense of humor to be able to play with some of the conventions of the genre and poke the occasional fun at some of the more outlandish elements. Reacher has plenty of hardcore one-liners, and there is one scene of Three Stooges-level slapstick that is a howl for how ludicrous the situation is, but also smartly placed as a lead-in to a fairly brutal fistfight.

Don't be fooled by Jack Reacher's PG-13 rating. The beatdowns in this movie are substantially vicious. McQuarrie eschews any real blood or gore, but that doesn't lessen the impact. The fight choreography is expertly timed and geared toward allowing Reacher to quickly immobilize his opponent. The hand-to-hand work is done close-up and without much editing, leaving the more bravura filmmaking to the larger action set-ups. Jack Reacher has a mid-movie car chase that is remarkable for its duration and creativity.

Everything in this movie is trimmed to remove any excess. There are no unnecessary elements to Jack Reacher. This includes dropping any semblance of sentiment and avoiding adding a romantic subplot. (McQuarrie goes even further with that, making fun of the idea that Cruise and Pike might hook up out on the battlefield.) This is very much a Point-A-to-Point-B script, only slowing down to catch the viewer up and pore over the evidence. Most of the momentum is built off of Cruise's movie-star charm. Let's face it, the guy is good at what he does. Few actors could play a trained killer with the kind of cold attractiveness that he manages here. As star and producer, Cruise very much runs the show, though he also isn't afraid to be upstaged. If he was, there would be no way he'd allow scene-stealers like Werner Herzog and Robert Duvall in supporting roles, respectively playing a mysterious villain and an old fuddy-duddy gun salesman.

In short, Jack Reacher is a crowd pleaser. If you're willing to get on board, you should have little trouble enjoying yourself. It's the kind of unpretentious genre picture that rarely gets made anymore. Even rarer still, you won't feel guilty about liking this one, the filmmakers approach it with smarts and without condescending to the lowest common denominator. So, go round up your pops, get him out of that recliner, and take him to the multiplex. He'll thank you afterward! 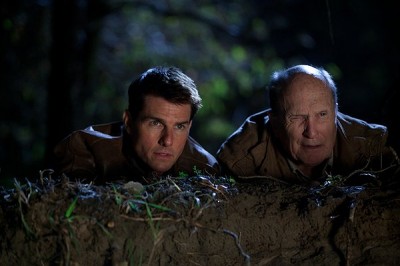