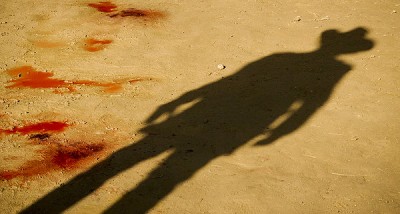 Waxing excitedly about a Quentin Tarantino movie is almost starting to feel like a knee-jerk reaction. As a writer, I've been here, done it before. Tarantino makes it pretty easy, though. It probably doesn't hurt that he only makes a feature film every couple of years, but when he does, they are insanely easy to like. He represents the filmmaker as a showman, the cineaste who entertains first and foremost, but with a flair all his own. There is a scene in his latest, Django Unchained, where Christoph Waltz, playing the bounty hunter Dr. King Schultz, is talking about buying a slave to put in the fight ring, and he expresses his desire to have a gimmick to sell the warrior. The man he is going to buy from, Leonardo DiCaprio's Calvin Candie, corrects him and says first he should find a fighter that wins, then turn him into a spectacle.

My feeling is this exchange could just as easily sum up Tarantino's creative process: first find a winner, then make sure it really is a winner, check again, and then put on your show.

Django Unchained continues the writer/director's tour of different genres, taking him back even further in time than his WWII picture, the superb Inglourious Basterds. This cowboy picture--the auteur calls it a "Southern" instead of a "Western"--is set in the American South two years prior to the Civil War. Waltz plays Schultz, a clever freelance lawman with a gift for gab only rivaled by his sharpshooting. The hunter is on the trail of three bad men, who so far have been hard to identify. He has heard tell of a slave named Django (Jamie Foxx) who was sold after a run-in with these crooks. Waltz goes out to find Django, offering the man freedom and some cash once the deed is done. By the end of their mission, however, Schultz realizes that he has found himself an able-bodied partner. Knowing that Django has a mind to find the wife who was sold away from him and buy her freedom, the good Dr. proposes a continued partnership: work through the winter collecting bounties, and then work together to wrest Broomhilda (Kerry Washington) from Candie's clutches.

This is the short version of the plot, and excepting a few surprising episodic detours, the long of it, too. As fans of recent Tarantino know, he doesn't trim down his movies, or his scenes, not even when the basic outline can be described that easily and that quickly. Django Unchained is over 2-and-a-half hours long, and yet it never strays from its single-minded mission. Hell, I could have stood another couple of hours of this. Outside of the anachronistic hiphop songs and the director's predictably terrible cameo, I can't think of anything I'd cut; at the same time, I can think of a bunch of characters that I wouldn't have minded spending more time with. 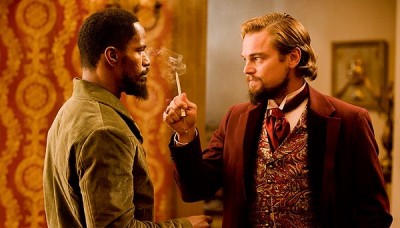 The cast roster is a long one. Don Johnson, Jonah Hill, Bruce Dern, Samuel L. Jackson, Tom Wopat, Michael Parks, Walton Goggins, and others all have roles of varying sizes; Zoe Bell and Robert Carradine make appearances, but good luck spotting them; and yes, that is Amber Tamblyn who peeks out a window in the first act and is never seen again. There is a sprawling nature to Django Unchained. Tarantino's script covers narrative ground as wide as the open plains his characters travel. Not surprisingly, many scenes of dialogue go on for long minutes, growing more tense, laying the groundwork for explosive violence and bloodshed.

There's plenty of both in Django Unchained. The shootouts grow larger with each skirmish, and human beings are little more than bags of blood. Bullets rend flesh, and red goo sprays everywhere. Tarantino is exploiting every trick of the exploitation genre, both dancing in the crimson rain and subverting some of the more unctuous tropes (for instance, there is thankfully no threat of rape here, no salaciously lingering on a naked body of a woman in peril). Moviegoers who are sensitive to racially based humor or epithets may find the abundance of both a little difficult, but at the same time, were the film to shy away from the truth of the matter, the villains wouldn't be nearly so deserving of the gunfighter's revenge. 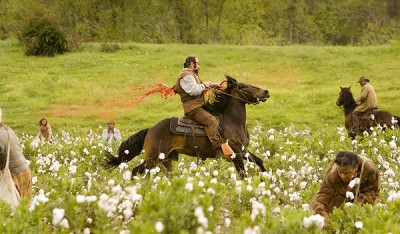 Admittedly, I am a pretty big Tarantino supporter, even though I am not really a cult member who hangs on his every utterance. (Seeing him introduce the Django trailer attached to Killing Them Softly caused me to audibly groan.) That said, I understand the detractors. I have a friend that just can't get into his movies who found herself intrigued by the early Django Unchained teasers. I am not quite sure how to answer her question of whether or not this motion picture is different than his others. It is, and it isn't. Django Unchained is still a film that is steeped in cinema history, that gives nods and shout-outs to the nerds who might recognize what the director is referencing. He still foregoes commissioning his own musical score and lifts tracks from other films. If you thought that Death Proof or Inglourious Basterds were too talky, strap in, there's plenty more chatter.

At the same time, the more distance Tarantino puts between himself and the modern era, the more his pop culture fanaticism is toned down and the more clever his writing gets. There is no Civil War equivalent of McDonald's for the guys to talk about, no movies for them to dissect for their gay subtext. The closest we get is Christoph Waltz relating the German tale of Brunhilde and Siegfried, providing a classical basis for Django's own scaling of an impossible mountain (Candieland!) to rescue the fair maiden. I don't know if Quentin has really made any great strides as a filmmaker, but he definitely is stretching himself as a writer. Impulse control will always be an issue, but all the macabre jokes land, so even that might not be such a problem. 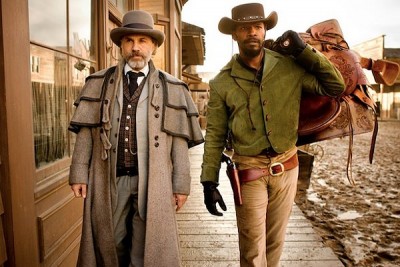 What struck me most about Django Unchained, even more than the gore or the gags or the impressive embarrassment of riches that is this ensemble cast, was the friendship between Dr. Schultz and Django. In most of Tarantino's movies, excepting maybe Death Proof or the romance in Jackie Brown, the drama consists of tenuous personal connections between the cast at large. Jules and Vincent in Pulp Fiction are colleagues, but they aren't pals, we don't really engage with them, nor they with each other, on a deeper level. This is not so for Django Unchained. The two main characters form a strong bond over the course of the movie. They swap stories about their respective pasts and also share their plans for the future. They respect and help one another. There is also the added element that they do so across a rather large divide. Theirs is a relationship that is more meaningful because of the race issues attached, and more uplifting for how that divide closes, how the barriers between them dissolve (to slightly mix my metaphors). This, at least to my eye, is far more meaningful interpersonal territory than Quentin Tarantino has ever attempted prior.

Don't get me wrong. There's not a lot of hugging and crying. This is still primarily a shoot-'em-up. Go for the guns and bullets, consider the rest a bonus. Foxx and Tarantino have created a kick-ass new hero together, and one I wouldn't be against seeing in the director's first ever sequel, should he decide to go that route. The multiplex has room for a black action hero franchise. Django Reloaded, anyone? 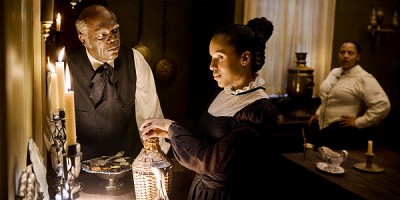