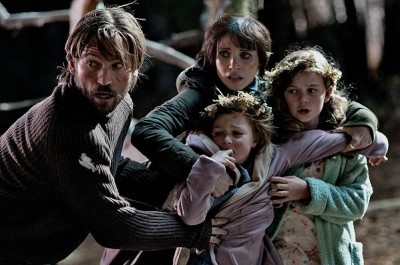 When a movie makes as little sense as Mama, you almost have to step back and wonder if the filmmakers made a special effort to keep everything so jumbled and disconnected. As if they had a whole rewrite stage where they removed any scenes that served to connect the different sequences together, all in an effort to make sure there was no internal logic. Was Mama all a big ruse to suck me into an extended metaphor about madness? Because if that's the case, turns out being crazy is also really damned boring.

Based on a short film by co-writer and director Andrés Muschietti, Mama is the latest horror movie to have the tag "presented by Guillermo del Toro." I don't know if "presented" is the right word. "Regifted," maybe? It's a horror bouillabaisse, co-opting its style and plot points from a myriad of ghost stories without ever considering how any of them might work on their own, much less as a unit. Mama starts out all right. A troubled father of two (Game of Thrones-villain Nikolaj Coster-Waldau, pulling double-duty as twin brothers) has gone off his meds and killed his estranged wife. On the run from the law, he kidnaps his two daughters. Their flight from justice ends with him driving their car off a mountain road and into an embankment of snow. He drags the girls from the crash site to an abandoned home deep in the woods. There, he is killed by a malevolent ghost who then adopts the girls and raises them herself. 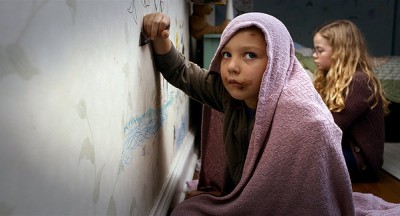 That is, until five years later, when the dead man's brother Luke's search efforts have finally paid off. Never mind that the crashed car should have been visible from the road. If it took five years, it took five years. The girls needed time to turn feral, looking to all outside eyes like they have fended for themselves during these wilderness years, living exclusively on cherries. (Promises to see the little kids fight raccoons, as shown in the children's drawings in the opening credits, are never paid off.) The oldest, Victoria (Megan Charpentier), was of sufficient age when the accident happened to have retained her language skills, but the youngest, Lily (Isabelle Nélisse), was just a toddler, and she's gone full forest child. An opportunistic psychologist (Tony Shaloub Daniel Kash) thinks he can reform the girls, and so he helps Luke retain custody, even though he doesn't have a real job and just draws pictures and neither does his girlfriend. Annabel (Jessica Chastain, coming straight off her Golden Globe win for Zero Dark Thirty) is a rock-and-roll chick who plays bass in a band and shouts out "Suh-weet!" when she fails her pregnancy test in her very first scene. But hey, who cares if these aren't good candidates for adoption? The psychiatric institute is going to give them a free house they keep on hand for observng special cases. An observation house with no cameras or any kind of alarm system, but shut up, it's free and convenient for them to live there.

A series of increasingly implausible and disjointed plot machinations follows, as the ghost tracks the girls to their new locale and proceeds to skulk around and communicate in sound effects borrowed from the Predator franchise. Don't worry, that's not a spoiler. There's maybe one scene where Mama sort of suggests Victoria maybe has a split personality, but no real effort is made to convince you of the viability of that red herring. Internal logic changes on a dime in Mama. This, after all, is the kind of movie where a rational doctor goes from saying he doesn't believe in ghosts to buying the spooky story about the dead mother looking for her lost child mere minutes later. It's around that point when it becomes clear that even the filmmakers realize that their script is terribly unconvincing. Fearing audience revolt, they plop in an out-of-nowhere voiceover so the doctor can explain just how stupid his decisions really are. He sounds like he believes it even less than you will. 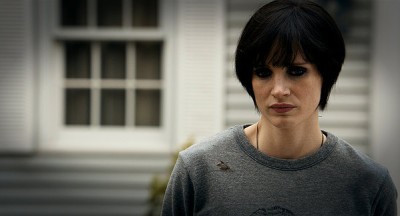 All that comes after seems more like a random string of events than a considered narrative. Characters make increasingly stupid decisions, while the nature of the spectral occurrences keeps morphing. So much of what goes on in Mama seems like the filmmakers were too caught up in thinking "Hey, wouldn't it be cool if..." rather than worry about how all these non sequiturs served the story. Like, for instance, that one time when the poltergeist shows up at the hospital and for the first and only time in the movie, effects a computer so that the word "Mama" repeats over and over on the screen. There is no reason for it, no one even sees it happen. Muschietti appears to want to scare people in 1986 more than the ones who are actually going to waste money on a ticket to his movie.

Terror eludes Muschietti throughout Mama. The multiple jump scares land without much effect, and the CGI apparition is so poorly integrated into the environment, there is never an illusion of threat. About the only creep factor Muschietti manages to create involves the girls themselves. To his credit, he directs his two young actors exceptionally well. Isabelle Nélisse is particularly good as the littlest one. Whenever she is on screen, even just hanging around in the background, she is given some weird business to do, like eating bugs or chewing on hair. The key to making Mama a successful fright fest is sitting there the whole time, but apparently no one figured out to move her front and center.

By the time Mama reaches its ludicrous climax, you'll be praying for release--and with increased fervor as Andrés Muschietti draws out the torture with a series of false endings, clumsily edited, lacking any sense of continuity (in the penultimate shot, the survivors are several feet from the cliff; in the last shot, they've somehow moved right up to the edge). Though, honestly, if you leave during the wrong ending, it won't matter much. Pick one and go, maybe you can beat the rush. 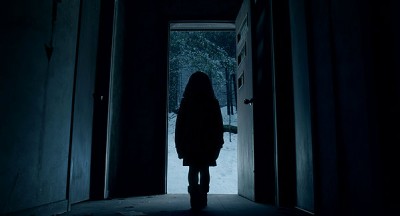