Please Note: The images used here are taken from a previous standard-definition DVD release, not the Blu-ray edition under review. 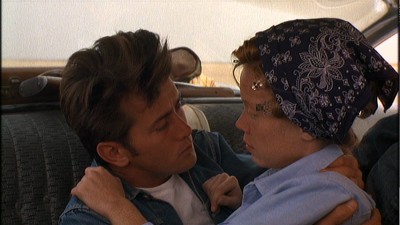 I've always considered Badlands, the 1973 debut of writer/director/producer Terrence Malick, to be a little outside the rest of his oeuvre. In my head, it was easily the most conventional of his pictures, as it has the closest thing to a structured plot, essentially being a fugitive road movie at its very base. I imagined that for his debut, to earn his reputation, Malick had one foot in the studio system and one foot in the territory he would soon stake out as his own, getting the powers that be on board before completely leaping over to the other side.

Having now watched Badlands for what I think is at least the fourth time, I am left scratching my head as to why I ever had such an opinion. Perhaps it's seeing it in a new context. Last time I watched the film, it was a faded 35mm print, laden with scratches, and played over a speaker system that made the movie sound like it was being projected from inside a bank vault. So, seeing it in a new, high-definition format is extremely illuminating. Not just like someone opened the vault doors, but they knocked down all four walls and took off the ceiling. There may be no second first impressions in life, but I do feel it's possible to see a movie, to really see it, for the first time even when you've watched it before.

Because looking at Badlands now, I see the beginning of everything Terence Malick. The classical music, the respect for nature, the poetic longing, disconnected voiceover running parallel and often perpendicular to the montage. Badlands has the same dreamy atmosphere, the same languid narrative pace, ebbing and flowing more to the vagaries and impulses of its characters and their circumstances than it is beholden to screenwriting structure. What one might argue, rather than carving Badlands away from the greater whole, is that this is the adolescent stage of the Malick filmography. There are certain growing pains, a not fully formed sense of identity, and a restlessness, all of which meshes perfectly with what is actually happening on the screen. 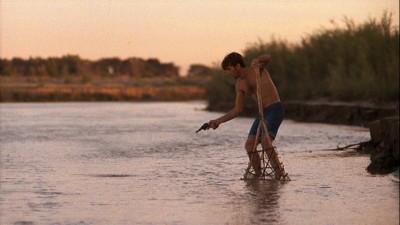 Badlands is, in many ways, a modern-day Romeo and Juliet, but filtered through the angst and existentialism of mid-20th Century Americana. Its story of lovers on the run is loosely based on the real-life story of Charles Starkweather and his teenage girlfriend. In the 1950s, the pair went on a killing spree, and though the real-life story was far more grisly and far from romantic, Starkweather had a kind of doomed matinee-idol image that earned him comparisons to James Dean. As Martin Sheen says in the new documentary on this disc, there was something compelling and complex about this bad man, and something unsettling about how charismatic he was. Sheen was aware of the original story when he took on the role of Kit, the Badlands analogue to Charles Starkweather, and as a performer, he embraces both the obliqueness and the self-satisfaction of a disturbed individual raging against the world. Though the fury is mostly implosive like Dean's in Rebel Without a Cause (except when, you know, it does explode), the motto of this wayward soul should perhaps be more in line with Brando in The Wild One. What was he rebelling against? Whatever you've got.

Happenstance plays a big part in the Badlands story. Who falls under Kit's gun is all a matter of who walks in front of it. The same goes for how he meets Holly (Sissy Spacek), a girl ten years his junior. He skips out on his job as a garbage man early, and he sees her practicing her baton in her front yard. For the inexperienced girl, it resonates as fate, the far-more teenaged impulse, all but making their doom inevitable. Her father (Warren Oates) doesn't approve, and his assertion of parental authority is what sets events into motion. Kit kills him first, and then takes Holly on the run. For the next couple of weeks, they move from place to place, taking what they need, and Kit leaves a trail of bodies behind. 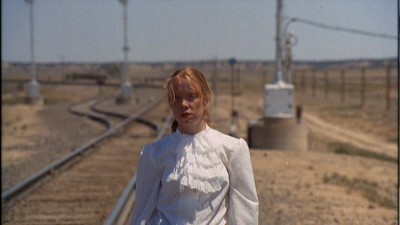 Though Badlands is essentially a story of young adults losing their way just as they are starting to find it, there are also interesting comparisons to be made to stories about even younger children. Kit and Holly are on a kind of warped version of adventures where kids are stranded away from civilization. They first stop in the woods and build a treehouse and live off the land, creating their own society somewhere between Swiss Family Robinson and Lord of the Flies. They also made me think of the two runaways in Wes Anderson's Moonrise Kingdom, particularly in how both the boy and the girl in each scenario represent different temperaments. Whereas Anderson's film is more romantic, and the differences between Sam and Suzy end up providing them solace, in Badlands, the grown-up lesson is in how two people initially seduced by the mysterious otherness of their companion can and do grow further apart. By the end of their flight from justice, Holly is bored and Kit's determined philosophizing has ceased to interest her. In truth, he is all action, all kinetic energy, and he only survives while in motion. She's the thoughtful one, as evinced by her narration, and so purposeless action holds no extended appeal.

It's been forty years since Badlands was originally released, though even when it was new, the movie cast its gaze back nearly twenty years, re-creating a period of American life that is often clouded by nostalgia. Malick's vision is more timeless, however, and throughout his career, as he moves his stories up and down the chart of modern history, he is more interested in the constants than he is any perceived change. Man is and has always been a product of the natural world, and the only thing more persistent than nature herself is the human propensity for violence and cruelty. Our hubris flows from our need to dominate, which leads only to death; the more we embrace our place within all that surrounds us, as we saw the characters do in The Tree of Life, the better off we are. Punishment comes to those who disrupt the chain--Holly's father killing her dog, for instance, unleashes some bad karma; or, Kit and Holly being the most content when playing house in the wilderness, encased in the life-giving foliage, and the further they rush out into the open, the more insignificant they become.

The film ends with an interesting coda that shows Kit about to become a kind of celebrity. His life as an outlaw is attractive to those who have never indulged their dark impulses. The rebellious American spirit he embodies would have us believe he was more free when on the run than the rest of us are when staying put. Yet we also see that he is a con man, that he will try to lie and charm his way out of trouble, even as he embraces being a tragic antihero on a collision course with the gallows. It's further proof that he will never change, whereas Holly can and has. Our last view of her is of a young woman smirking at the antics of a man she will likely always hold some affection for, but whose tricks she now sees right through, even as everyone else continues to be fooled. 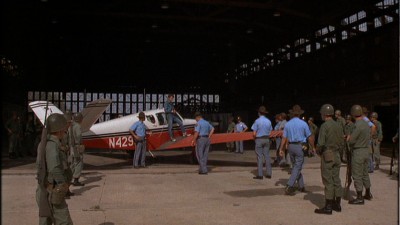 Video:
The Blu-Ray for Badlands was struck from a new 4K digital restoration, presented here on disc as an MPEG-4 AVC encode with 1080p resolution. The color picture, shown at its original 1.85:1 aspect ratio, is revelatory. Literally. It reveals so much in terms of the attention to detail paid to each and every frame by Terrence Malick, art director Jack Fisk, and the three cinematographers working behind the camera. Much is always made of Malick's use of "the magic hour," and that is certainly on display here--the open fields of rural America never looked so beautiful, not even when photographed by John Ford--but one should also appreciate the more subtle forest scenes, with the play of light and shadow, or the enveloping blackness of the nighttime sequences, particularly when Kit and Holly's escape is contrasted against the burning house.

More important, though, is just the depth of detail now evident on the screen. The newfound clarity means Malick aficionados can appreciate in full the small touches that bring each setting to life. This is particularly impressive in the interiors. From the start of the movie, we see people who quite literally collect junk, and so when we go into both Cato's house and the rich man's, we see the accoutrements they've gathered, the clutter they surround themselves with. It actually makes for a subtle commentary on class, how differently they live and yet gripped in the same obsession with things. One man's trash is another man's treasure, as they say.

Sound:
The original soundtrack has been remixed as an uncompressed monaural audio presentation, and it's stupendous, as well. The music sounds lush and warm, and the sound effects are now more clear and modulated for impact. The gunshots, in particular, pop at a level that increases the shock value of the violence. I think the only possible downside to this new clarity is it is more evident than ever how much of the dialogue was re-recorded in post. We can hear what's said distinctly, and also make out the movement of the actors' lips, and I never noticed before how often they don't match!

English Closed Captioning is available for those who require it.

Extras:
As per usual, Criterion leads their extras with a thick booklet featuring photos, credits, and a lengthy essay by filmmaker Michael Almereyda.

The bulk of on-disc extras are made up of interviews, including a 42-minute compilation of new interviews with Martin Sheen, Sissy Spacek, and art director Jack Fisk (a.k.a. Mr. Spacek). This is billed as Making "Badlands" and is definitely essential viewing, providing context for how this film came together and what it meant for everyone's careers. In addition to this are 13 minutes with producer Howard Pressman and 22 minutes with Malick's regular editor Billy Weber.

For those interested in the original Charles Starkweather story, there is an episode of "American Justice" from the 1990s that looks back at the case and features a lot of footage of the killer and his companion, Caril Ann Fugate. In fact, they focus a bit more on her, including her later life, as her level of involvement in the brutal murders has always been an element of contention.

There is also a theatrical trailer.

FINAL THOUGHTS:
DVD Talk Collector Series. Terrence Malick's Badlands was unlike anything else when it was released in 1973, and it continues to stand apart from the cinematic landscape as something very special. This debut effort shows one of moviemaking's most gifted artists arriving fully formed, exploring themes of personal responsibility, romantic tragedy, and man's inhumanity to man via a repurposed story of a 1958 killing spree perpetrated by two young lovers on the run. Both Martin Sheen and Sissy Spacek made their names with this film, and Criterion's brilliant restoration makes it all look brand new again. 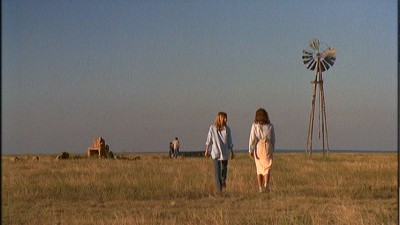