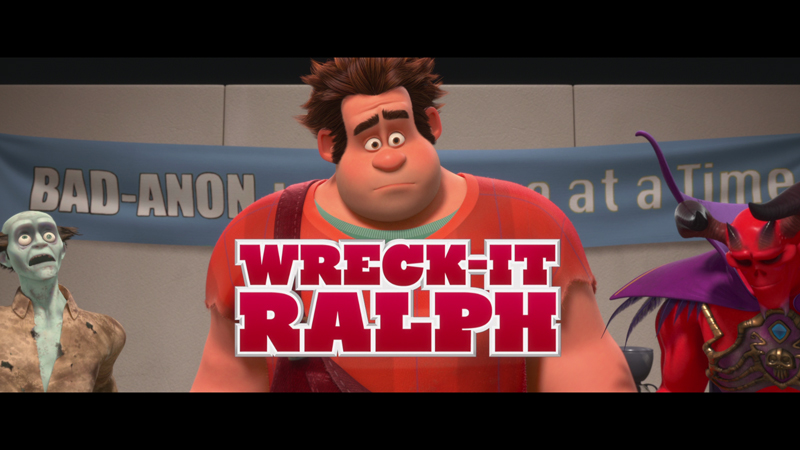 
The Movie
My own view of Wreck-It Ralph is forever biased by the way I first experienced it. On a rare weekday where myself and my daughter were both free, I surprised her by taking her to see Wreck-It Ralph toward the end of its theatrical run. To our surprise though, we found we were the only ones in the theater as the trailers rolled, and we enjoyed a private screening of the film, an experience we'll never forget, especially as we shared some happy tears during the pre-movie short and then more when Wreck-It Ralph proved to be the best animated film we'd seen in some time. Brave may be an artistic and technical marvel, but Wreck-It Ralph is an honest-to-goodness cartoon classic.

The story of a big lug of a video-game villain is deceptively simple at first, as Ralph (John C. Reilly) is tired of being the bad guy day after day in the game Fix-It Felix Jr. The setting lets the movie have a lot of fun with classic video-game references as Felix (Jack McBrayer) saves the day again and again. Frustrated by his lot in life, Ralph goes AWOL in an attempt to become a hero, making his way into the first-person-shooter Hero's Duty, where he attempts to kill invading Cy-bugs alongside Sergeant Calhoun (Jane Lynch.) Things don't go as planned through, and he soon finds himself launched into a candy-themed racing game called Sugar Rush, and he didn't make the trip alone.

An outcast in his own game, and in this new world, he finds a kindred spirit in Vanellope (Sarah Silverman) who wants to compete in the Sugar Rush races, but some faulty programming has rendered her a malfunctioning "glitch." For being different, she's bullied by the other confectionary cartists, and made an outlaw by the strange King Candy (Alan Tudyk channeling Ed Wynn.) Though Ralph wants to help her, King Candy explains the dangers of his interference, though the little guys doesn't seem to be on the up and up. To figure it all out, Ralph has to decide what it means to be a hero and whether a person is what others say they are. It's pretty heady stuff for a kids movie, and it makes for an emotional final quarter of the film that's wrapped in an exciting action blow-out. 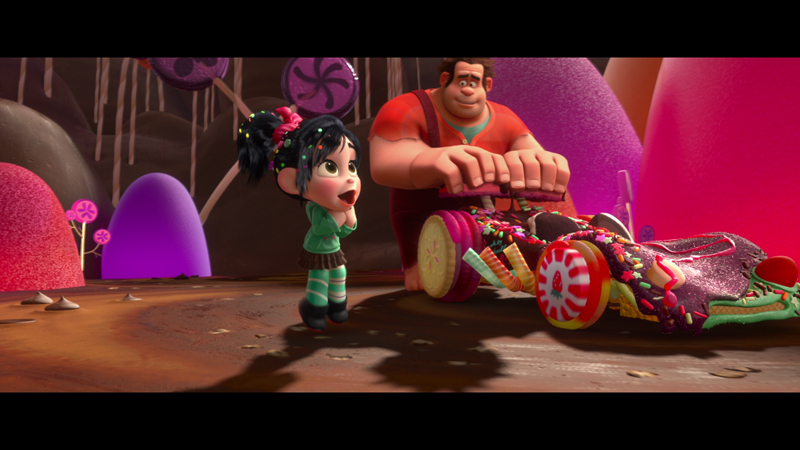 The thing that struck me more than anything about Wreck-It Ralph is the way the film's sentimentality creeps up quietly, lying in wait between the silliness of the first half of the film and the all-out action of the final stretch. The friendship that blossoms between Ralph and Vanellope is genuine and fun, aided by the performances of Reilly and Silverman, two comic actors not exactly known for crafting emotional resonance. You'd have to be heartless though to not feel for Vanellope, but in the hands of director Rich Moore (Futurama), Jennifer Lee and Phil Johnston's script strikes a perfect balance that avoids feeling mawkish. As a result, it was hard to not make positive comparisons to Brad Bird's tremendous and hugely underrated The Iron Giant as the credits rolled.

Though the candy-inspired world of Sugar Rush and the positive messages were all my daughter needed to make her desire her own Vanellope doll, the film offers plenty for adults to enjoy, from the lush, highly-detailed animation (though even the less-detailed but tonally-perfect world of Fix-It Felix, Jr. is pleasing to the eye) to the well-plotted story. The wealth of video-game references is also sure to draw viewers who played games as a kid or today. These hidden (and not-so-hidden) bits are everywhere in the film, from obvious appearances by famous characters to passing mentions and small visual gags. The cast is also a big reason for older viewers to give the film a look, as it's loaded with cameos by recognizable comedy and animation stars, including Jess Hartnell, Mindy Kaling, Maurice LaMarche, Ed O'Neill, John DiMaggio and Rachel Harris, among many others. 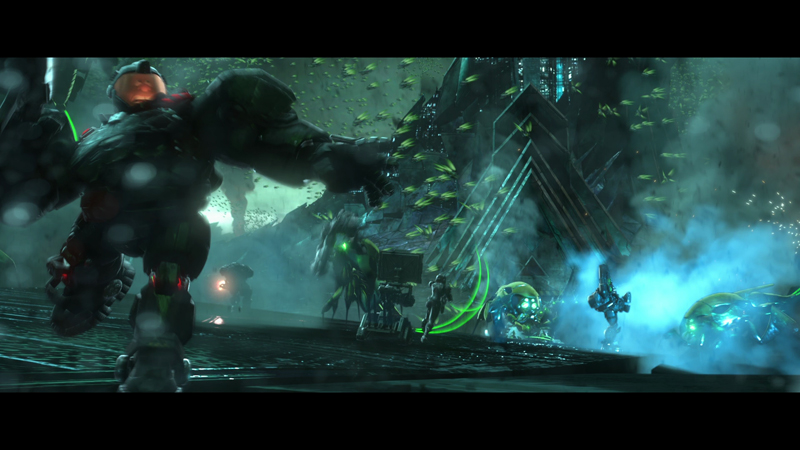 The Discs
The Ultimate Collector's Edition of Wreck-It Ralph arrives on four discs, two Blu-Rays, one DVD and a disc for the digital copy, which are packed in a dual-hubbed, standard-width Blu-Ray keepcase inside a slipcover with a foil-embossed cover featuring an embossed lenticular-3D cover piece. Note, four discs in a dual-hubbed keepcase means that they are packaged in two stacks of two. It's a pretty tight fit, so the discs don't feel in danger of damage, but it's a bit awkward pulling them out. The discs have fun animated menus with a video-game cabinet theme, offering options to watch the film, select scenes, adjust the set-up and check out the extras. Audio options include English 7.1 DTS-HD Master Audio, English DVS Dolby Digital 2.0 and French and Spanish Dolby Digital 5.1 tracks, while subtitles are available in English SDH, French and Spanish.

The Quality
The 1080p AVC-encoded (MVC-encoded for the 3D version) transfer is just incredible, delivering every little detail in crystal clarity, with gorgeous color and deep, dark black levels. Combining four different video-game graphic styles and tons of minute details gives the film plenty to show off, and the image, which is free of any visible issues with digital artifacts or any other distractions, is simply sparkling. The 3D doesn't go in for a lot of the obvious in-your-face effects, instead building up depth (though there are a few explosions and splats that will fly your way.) It's hard to pick up much of a difference between the two versions, as the inherent brightness of the film carries over nicely to 3D, and the deeper image maintains the integrity of the standard release.

The 7.1 DTS-HD Master Audio track is a blow-out presentation for the film, taking the film's bombastic scenes and bringing them to magnificent life. Whether it's a run-and-gun battle scene, a speedy cart race or a boisterous party scene, the room is filled with the scene's sound. One moment, where fireworks are exploding overhead, you can hear explosions throughout your surround speakers, with excellent placement and movement, while the bass pumps out some impressive power to enhance the effects. Even when the film gets a bit quiet (which isn't very frequent), the dialogue is clear and crisp (and often well-placed in the surrounds), and the score is strong and effective. That's not just from a technical perspective, as it adds a sense of joyous energy and sets the tone well for the film.

The Extras
The key extra here has nothing to do with Wreck-It Ralph, though it was shown in theaters before it, and that's the Oscar-winning short film paperman (6:34.) Gloriously animated in a mix of computer and hand-drawn animation and bursting at the seams with a sense of romance, beauty and humor, paperman was a perfect companion to Wreck-It Ralph, even if it likely went over the heads of the kids watching. It would have been nice to get at least an audio commentary, but this short floats along on its own here, available in 2D and 3D (the only extra available in both versions.)

Back on the 2D disc, you start with "Bit by Bit: Creating the Worlds of Wreck-It Ralph" (16:40,) which gives you a look inside the making of the film, via interviews with many members of the creative crew, focusing mainly of the different games seen in the film and how their looks, characters and features were developed. The cute touches, like 8-bit avatars for each interviewee, and the chance to take a look inside Walt Disney Animations Studios, make this quality addition.

If you want an even more in-depth look at the film, 14:28 of deleted/alternate scenes are available, with audio commentary from Moore (with co-writer Johnston and story head Jim Reardon.) What's most interesting about these scenes, which are presented in animatics with dialogue, sound effects and music, is how they show an entirely different movie, revealing how dramatically the plot has changed over the course of the film's development. Unfortunately, knowing Moore and company got together to record commentary and we didn't get one on the actual film is a big disappointment.

Some fun promos are included, four video-game commercials running 2:39 in all, though the best is definitely the retro ad for Fix-It Felix, Jr. and the arcade that hosts it. As the ads get more modern, they unfortunately get less authentic and less engaging.

More interesting is Disney Intermission, which is a great idea, though it's hidden in the set-up menu. When it's activated, whenever the film is paused, comedian Chris Hardwick hosts a gamer's guide to the film, which includes 9:23 of segments about the video-game references in the film. A good deal of the time is taken up by the titles though, which repeat with each piece. That said, it's a good use of Hardwick's nerd appeal, and some of the info is interesting to learn. Once you view them all, they repeat randomly.

Wrapping things up, in addition to some trailers, there's also a Digital Copy tutorial (1:04.) 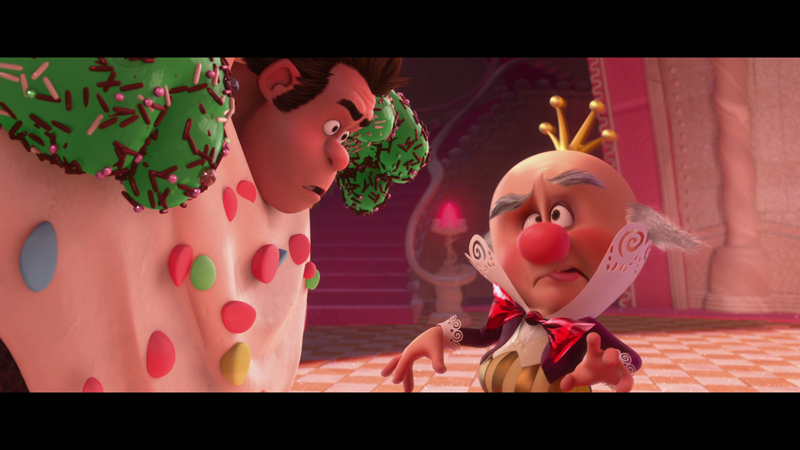 The Bottom Line
Wreck-It Ralph is one of the most entertaining animated films to arrive in a good long time, out-Pixar-ing Pixar (even if John Lasseter was in charge here.) Every element, from the story to the comedy to the action and the heart, is just about perfect. But while this may be a fantastic film presented in glorious quality. in both 2D and 3D, the label of Ultimate Collector's Edition is a bit grandiose in comparison to some of Disney's other home-video releases. That said, what is included is quite enjoyable, especially the Oscar-winning paperman. This is one set that should be in the collection of every animation fan and every family looking for something the whole family can enjoy.