Boogie Man Will Get You, The 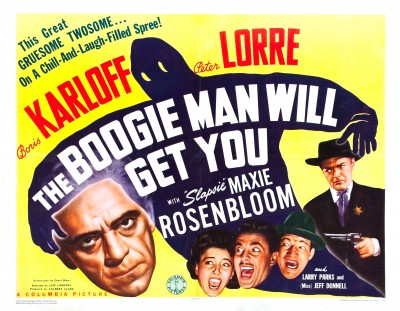 First of, there is really no boogieman in The Boogie Man Will Get You. Only the slightest hint of one. Which just goes to show you how slapdash this would-be slapstick comedy from 1942 really is.

Frankenstein-star Boris Karloff stars as mad scientist Professor Billings, owner of a historical homestead and a pile of debt owed to small-tow con man Dr. Arthur Lorencz (Peter Lorre, The Maltese Falcon). When a naïve young woman (Jeff Donnell, In a Lonely Place) decides to buy the rundown house and turn it into a hotel, the usual shenanigans that go on around the Billings place begin to compound. You see, the old Prof. is conducting experiments in his basement, luring traveling salesmen into his lab to be guinea pigs in his experimental procedure to create a flying super soldier to win World War II for the good guys. The girl's estranged husband (Bill Layden) is a fumbling do-gooder who thinks his wife is being taken advantage of. Soon Billings and Lorencz turn their sights on him, thinking they can submit him to the experiment before he can tell the cops about the strange doings and all the bodies piling up in the cellar. Naturally, something goes wrong each time they try to put him or anyone else into Billings' machine, but an endless supply of new salesmen keeps the movie chugging along.

The Boogie Man Will Get You is a short B-comedy meant to capitalize on and make hay out of Karloff and Lorre's sinister reputations. It works in so much as they are the only real reason to watch this cold cinematic stiff. Both are gung-ho to go after the gags and mug for director Lew Landers, with whom the pair made a few other comedies, including The Raven, but based on how much else doesn't work in The Boogie Man Will Get You, I won't be checking out that or any of the others any time soon.

The film isn't terrible, it's just not very good. The scant plotting would be fine if the dialogue were clever or the pratfalls remotely agile. None of the rest of the supporting cast even belong in the same room as the two stars, and as a director, Landers is merely efficient, not effective. Horror and noir fans will probably enjoy seeing these well-known heavies applying a lighter touch, but even at a brief 66 minutes, expect to take a bathroom break or two--without having any real desire (or need) to hit pause on your DVD player. 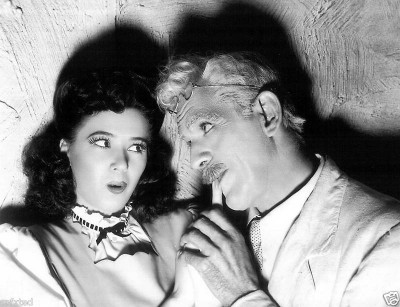 Video:
The Boogie Man Will Get You is part of the Sony Choice Collection, the studio's manufacture-on-demand label, and it is shown in black-and-white as a full-frame DVD transfer. The picture quality is basically average, with okay clarity and not too much by way of shimmer or jagged edges. There are marks on the film, but nothing egregious. Blacks are fine. Everything is fine.

Note: Though my Blu-Ray player ran The Boogie Man Will Get You just fine, my computer is refusing to recognize that there is anything on the disc. This is the first time this has happened to me on one of the Sony M-O-D titles, but I mention it as explanation why there are no screengrabs with this review.

Sound:
The mono soundtrack is free of dropouts and is mostly clear, though an occasional background whistle, like a wind blowing through a tin shed, can be annoying.

FINAL THOUGHTS:
Rent It. The Boogie Man Will Get You is harmless fluff, putting two horror regulars into slim comedic situations in hopes that they'll manage to make something out of them. Peter Lorre and Boris Karloff are good in this would-be wartime chuckler, but the gags are as dead as the monster Karloff is most famous for playing. It would take some kind of mad comedic genius to stitch these set-ups together and make something living out of the pieces. Only for the most dedicated fans of classic noir and horror. 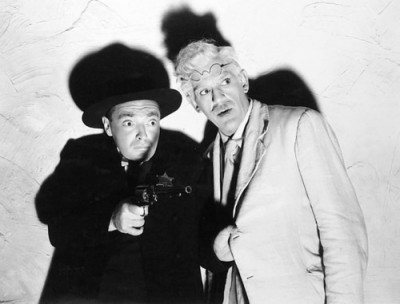