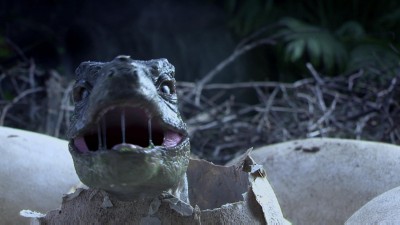 Produced in Korea and released there as "Tarbosaurus 3D", "Dino King" is the saga of a tarbosaurus named Speckles (because of the spots on his face), following him over a few decades from hatching one moonlit night to becoming a father of his own offspring. The movie is presented partly as entertainment but also throws in a number of educational elements seemingly aimed towards kids, and it's all narrated by Speckles himself, voiced by two uncredited actors, one in a child-like voice as a small dinosaur and the other after he is full-grown (I assume the original dialogue was in Korean, but American English is the only language included on this disc). The other dinosaurs don't talk however, as they did in Disney's Dinosaur.

Speckles starts out living with his parents and siblings, but things soon turn tragic when a big red tyrannosaur with one eye (and thus referred to as "One-Eye") shows up, resulting in them being killed and Speckles forced to run off and survive on his own. He manages rather well and even finds a mate named Blue Eyes, but One-Eye keeps showing up and complicating things until ultimately he's forced to stand up to him and avenge what happened to his family. 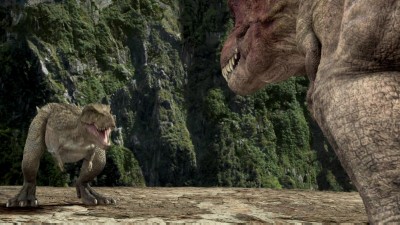 "Dino King", at least in this American incarnation, seems to be aimed mostly at kids. The narration given by the younger Speckles, in a voice sounding like a more innocent Bart Simpson, spends a lot of time simply describing things that are going on while also throwing in many details about dinosaurs in general in an effort to make the movie educational, such as identifying each type of dinosaur that appears and when watching one eat says "He's eating gravel to help with digestion". This becomes less frequent after the movie begins to focus on the face-off between Speckles and One-Eye however.

"Dino King" is quite beautifully detailed, with the dinosaurs appearing mostly realistic and backgrounds of mountains, trees, rocks and water appearing so lifelike that I could not tell whether they were actual photos or created entirely via computer. The accompanying orchestral score with choral elements during the more intense sequences is well-done also. Kids will likely enjoy this, but adults may find parts of it beneath them, particularly the narration of the younger Speckles. I'd advise anyone put off by that to stick with it however, as things pick up quite a bit in the second half and it ends on a much more satisfying note. 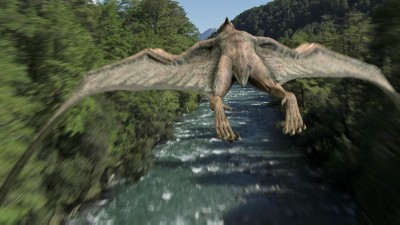 Presented in full-frame 16x9 and in 3D with a 2D playback option, the picture quality of "Dino King" is on par with most other computer-animated movies, my only complaint being that there is some slight compression artifacting in some scenes, which in my experience seem to be more prevalent in 3D material than 2D- being on a single-layer disc probably doesn't help matters, but despite that the picture still looks very good most of the time with lots of detail in the characters and backgrounds. The 3D of course is what will likely attract many people to this, and most of the time it's also on par with other 3D computer-animated movies- there are not a lot of 3D effects just for the sake of them and nothing really protrudes from the screen, but a good sense of depth is given most of the time. Most effective are a couple aerial sequences where the camera follows flying pterodactyls. There are a few shots here and there however which appear almost two-dimensional, as if not enough time was given to render them in full 3D. Overall this is an adequate 3D experience but not a title that should be viewed simply because of its being in 3D. 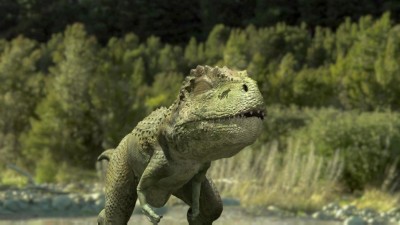 Audio is in 5.1 DTS-HD Master Audio and is very clear, with surrounds used a bit sparingly but effectively, with occasional uses of the LFE channel as well (particularly during fight scenes as dinosaurs "thud" on the ground). There are plenty of dinosaur roars but not quite enough to make this comparable to Jurassic Park but then again what else has ever topped that movie? There is also a 2-channel mix in Dolby Digital.

The only extra is a short video-based trailer for "Dino King" which makes note of the movie's action taking place on the land which is now Korea. It would have been interesting to see at least a bit of information about this movie's production, but this trailer is all we get. 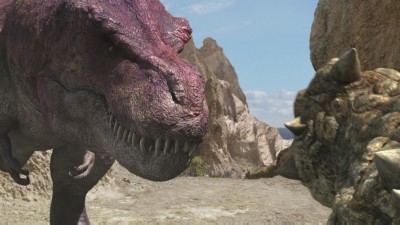 "Dino King" is decent enough entertainment, although the whole thing with the main dinosaur narrating the movie might be a bit much for some viewers to get past. It would have been interesting if the original Korean dialogue were also included, with subtitles giving a straight English translation of that to see if the flavor of it was the same as the English narration. Even if that is the case, the English track still comes off rather phony as English dubs of Asian live-action movies usually do. The level of detail in the animation is impressive, with good but inconsistent 3D. Overall this will appeal mostly to kids, but older viewers should at least enjoy the second half.