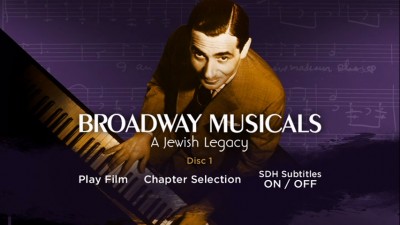 Originally aired on PBS, the documentary Broadway Musicals: A Jewish Legacy explores the storied connection of the two halves of its title, asking the question, "Why were so many famous American composers in musical theatre also Jews?" The Gershwins, Rodgers and Hammerstein, Irving Berlin, Kurt Weill, Leonard Bernstein, Stephen Sondheim--just about everyone but Cole Porter was Jewish. Even performers, including Barbra Streisand and Zero Mostel.

Using archival performances, new interviews, and, at least early in the show, specially recorded songs by current Broadway performers like Matthew Broderick and David Hyde Pierce, director Michael Kantor looks at the origins of contemporary Broadway in Yiddish theatre, the connection of the art form to the early 20th-Century version of the American Dream, and how the pervasiveness of successful songs influenced pop culture and vice versa. Traditions were assimilated as outsiders found a new voice in a new world.

Critics and contemporary composers decode the hidden messages in the lyrics, while historians and narrator Joel Grey share details of the immigrant experience and the cultural backdrop, including the racially and ethnically mixed melting pot of New York, that gave rise to a truly American art form. Descendents of well-known writers also share biographical details. Amidst all the talk, of course, are plenty of clips from the songs. "Rhapsody in Blue," "Swanee," "Wouldn't It Be Loverly," "My Heart Belongs to Daddy," "September Song," "Somewhere"--there are plenty of earworms here, and it's fascinating to hear how many of them transformed a specific experience into a universal feeling. Most of the stories in these plays aren't Jewish (Fiddler on the Roof being an important exception), and yet all of them are. There is also a surprising patriotic streak running through many of the standards. (Irving Berlin wrote "God Bless America," after all.)

Broadway Musicals: A Jewish Legacy makes both for a great narrative and also an education. In much the same way cinema is still indebted to the early pioneers, so too is 21st-Century Broadway still in thrall to its formative successes. Kantor carries the thread through history, from the early Jazz Age to WWII, social change and civil rights, and finally a more open society that allowed for stories that were more explicitly Jewish, such as Cabaret or even The Producers. Now Spamalot can even include a whole song about needing Jews if you want to have a hit play. The outsiders became the insiders, the product of an alternate history running parallel to life as we know it, reflecting on our existence and, at its best, making the world a better place through entertainment. Which is how Broadway Musicals: A Jewish Legacy functions, as well: informative, but with pizzazz. 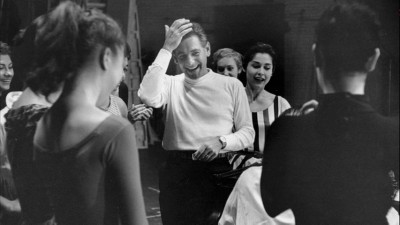 Video:
The widescreen presentation of Broadway Musicals: A Jewish Legacy is a little disappointing. Colors are fine, and the archival material is nicely cleaned up, but the overall resolution is soft. There is a grainy haze over much of the new footage, as well as lots of jagged edges and blurs.

Sound:
The 5.1 audio mix on the documentary has good volume and clarity, though it's mostly centered in the front speakers and does not have much of an immersive quality.

Subtitles for the Deaf and Hearing Impaired are available. That includes the bonus disc. 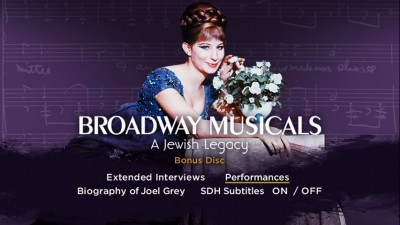 Extras:
Broadway Musicals: A Jewish Legacy is a two-disc set, with the documentary on the main DVD and a bunch of bonus material on the second. The DVDs come in a standard case with two separate trays, a slipcover, and a sixteen-page booklet containing information on many of the contributors to the program as well as added liner notes.

The video bonus materials, which together total three hours, are split between two categories: extended interviews and bonus performances. There are twenty-five interview subjects, each of which you can choose from individually, including lyricist Hal David, Eric Idle, Steven Sondheim, Marc Shaiman, and Mel Brooks. In terms of songs, there are three: composer Adolph Green's daughter Amanda Green singing "If You Hadn't But You Did" (Two on the Aisle), Stephen Schwartz performing "Magic to Do" from his show Pippin, and Shaiman doing his own "A Doctor, A Doctor," which he wrote for his sister's wedding. These are not necessarily full performances, but off-the-cuff renditions for Kantor's camera.

There is also a text biography of Joel Grey.

FINAL THOUGHTS:
The melodic documentary Broadway Musicals: A Jewish Legacy is as entertaining as it is instructive, detailing the history of a truly American art form and exploring why its major practitioners have mostly been Jewish. The show is full of great archival performances, displaying how hummable most of these tunes really were, and coupling them with fascinating stories that speak to the history of a nation. Recommended. 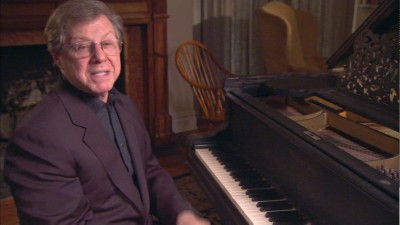