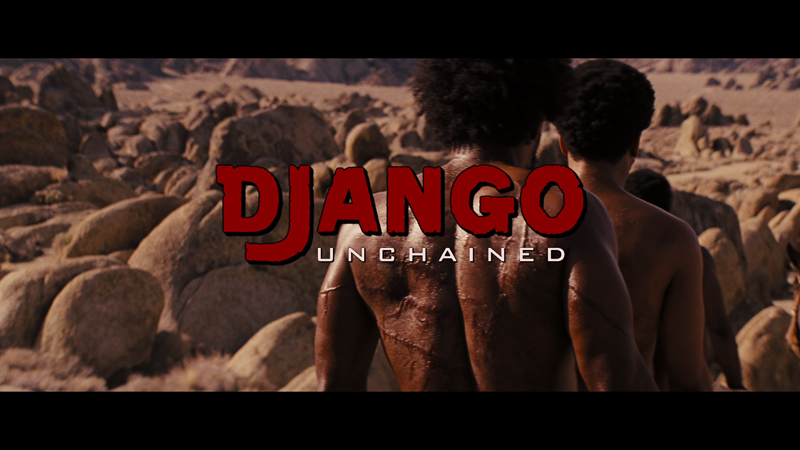 
The Movie
Anyone who has seen me write (or has seen my office) can attest to the fact that I am a multitasker. You won't normally find me focused on just one activity, as normally I'll have a hockey game on one screen, music playing, Food Network or some other TV wallpaper playing and a blank sheet waiting to be filled. So it was not strange for this to be the setting as I started in on my first viewing of Django Unchained. However, the hockey and the music and the TV melted away quickly as I became entranced by a German bounty hunter named Dr. King Schultz (Christoph Waltz) and then soon after by his associate Django (Jamie Foxx). Before long I found myself lost in the words I was hearing and the action on-screen, leaning forward in rapt attention. This does not happen frequently and serves to indicate what an engrossing tale Quentin Tarantino has crafted with his latest film.

Set just before the Civil War, the film follows Schultz and Django as they become fast friends while hunting down criminals wanted dead or alive. It's all part of Schultz' plan, as in return for Django's help, the good doctor gives the slave his freedom and will help him find his wife Hildi (Kerry Washington) who was sold away from Django as punishment. That second part won't be easy though, since the journey will take them into the dark heart of southern racism, Candyland, the Mississippi plantation of Calvin Candie (Leonardo DiCaprio) forcing them to face the worst of man's evil every step along the way, with a crowd-pleasing quest for vengeance to boot. 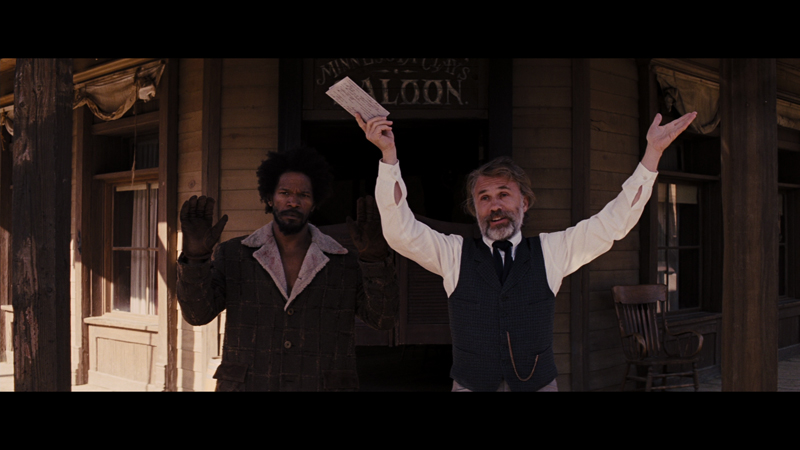 Naturally, with this being a Tarantino film, the key to everything is the dialogue, and this movie is dripping in Oscar-winning brilliance, as the period setting frees Tarantino from his reliance on pop-culture references and lets his ear for monologues and conversation shine bright. (Not that the film is free of references though, as there are touches of classic spaghetti westerns and exploitation films everywhere in the film, not to mention the title character.) It sure doesn't hurt that the words are coming out of the mouths of great actors like Waltz and DiCaprio. Leo really should play bad guys more often if his vamping here is any guide, and Waltz is the most unlikely kick-ass, yet literate hero in recent movie history. Due to his character's limited linguistics, Foxx doesn't get the same level of material to work with, but his stoic presence and arch delivery puts him right in line with the pantheon of exploitation heroes, while Samuel L. Jackson plays wonderfully against type as the elderly slave head of Candie's home, even if his usual trademark anger is still ever-present.

Also ever-present are Tarantino's indulgences, which are thankfully less of an issue, but they are still there (along with Tarantino's great ability to blend drama and comedy, with a Blazing Saddles-esque proto-KKK attack led by, of all people, Don Johnson and Jonah Hill, serving as the height of the film's ridiculousness.) Whereas in Death Proof the conversations were long and draggy (I still argue that the order of the films in Grindhouse should have been reversed) the conversations here are long and engaging, due to the abilities of the actors and the much higher stakes. These words have meaning, and they are spoken with gusto, especially by the incredible Waltz. The tense conversations make the 166-minute run-time feel like it passes far quicker than it actually does.

On the other hand, the portrayal of ultraviolence seems frankly overdone. When bullets fly in the world of Django, the effect is anime-like, resulting in large gushes of candy-colored blood, an effect that takes away from the otherwise tense feel of the movie. It was an odd choice, since Tarantino actually plays most of the other horrors the film depicts, of which there are many, in an almost subtle manner, using editing and camera angles to suggest or obscure the rough stuff. The result is an ugly beauty, best illustrated by blood spray on white flowers. Tarantino and legendary DP Robert Richardson have created a gorgeous western full of memorable, poster-worthy frames. 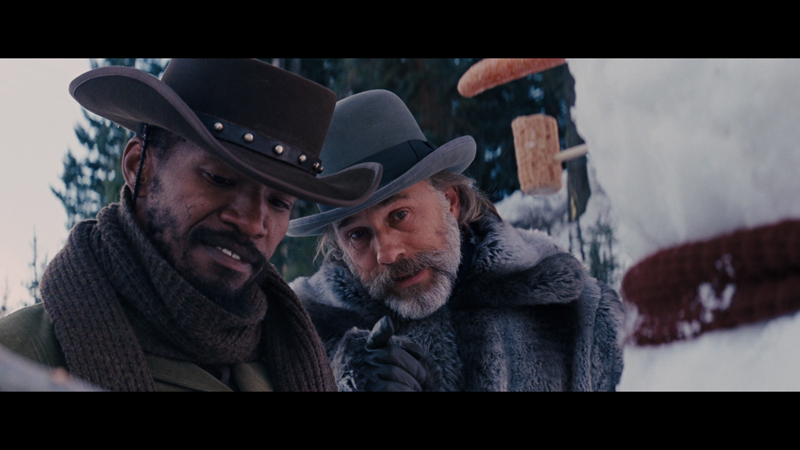 The Discs
Django Unchained comes in a two-disc set with a Blu-Ray and a DVD in a dual-hubbed standard-width Blu-Ray keepcase, which is packaged in an attractive embossed slipcover that repeats the cover art. The disc features an animated menu with options to watch the film, select scenes, check out the extras and adjust the set-up. Audio i options include English DTS-HD Master Audio 5.1 and Spanish and French Dolby Digital 5.1 tracks, while subtitles are available in English SDH and Spanish.

The Quality
The AVC-encoded 1080p transfer delivers all of Tarantino and Richardson's beautiful vistas and well-constructed 2.40:1 frames without concern, as the black levels are solid and the color is spot-on from start to finish, whether it's a dark night scene under the stars, a warm day on the plantation or a blood-soaked, gunpower-haze filled interior scene. The level of fine detail is high throughout, showing off all the intricate production work, including the great costumes and visual effects, like the scarring on the backs of the slaves. There are no problems with digital distractions in this release.

Delivered with a DTS-HD Master Audio 5.1 track, Django Unchained sounds terrific, thanks to a mix of very present atmospheric effects, a highly active soundfield and an impressively strong soundtrack that helps establish the film's anachronistic, yet tonally-faithful take on the spaghetti western. Dialogue is clean and clear throughout, and the mix is nicely dynamic, with action on all sides when the film picks up. The soundtrack, which is all over the place, from exploitation-style themes to modern rap songs and pretty much everything inbetween, really helps craft the feel of the film, without getting in the way of the rest of the audio. Good stuff all around.

The Extras
Right off the bat, if you're looking for Tarantino, you're going to want to look elsewhere, as he's not very present in the extras included here, starting with his surprising absence from "Remembering J. Michael Riva: The Production Design of Django Unchained" (12:50). The blockbuster production designer (Iron Man, The Amazing Spider-Man) passed away from a stroke during the film's production, and this featurette includes memories of him from the crew, as well as a final interview with Riva, where he talks about working on the film. Considering he died on the job, it was nice to give a behind-the-scenes crew member some spotlight, but not having anything from Tarantino is a bit odd.

"Reimagining the Spaghetti Western: The Horses & Stunts of Django Unchained" (13:46) naturally focuses on the horses and stunts in the film, via interviews with the stunt experts and horse trainers who worked on the film and some on-set footage. There are some pretty interesting bits of info here, including Foxx' personal involvement with the horses and how the animals worked amongst pyrotechnics, along with a look at the quick-draw expert brought in to teach firearms handling.

The final featurette "The Costume Designs of Sharen Davis" (12:03) is another appropriately titled extra, as it looks at the designer's clothing creations for the film, via interviews with Davs and several of the cast members, who talk about the outfits they wore for the movie. The most impressive part are the design sketches shown, which really captured what the characters/actors would look like, and barely changed in the final crafting.

Two trailers, one for the Tarantino XX collection and one for the Django Unchained soundtrack are included here, along with a digital copy of the film and an Ultraviolet stream to watch. 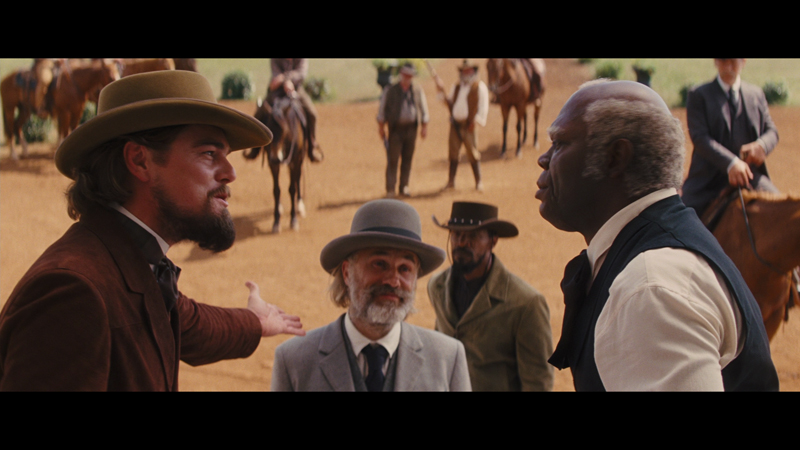 The Bottom Line
A fantastically engaging refreshed western, Django Unchained represents another stop in Tarantino's tour of film genres, and following Inglourious Basterds, it represents the filmmaker's successful evolution from a pop-culture aggregator into an excellent high-energy storyteller. The Blu-Ray looks and sounds great, though the extras are limited, and mostly Tarantino-free. Though its a must-see for anyone who can stomach the harsher aspects of a Tarantino film, owning this version is only for the diehard fan, because hopefully there's a more full-featured version coming some day.