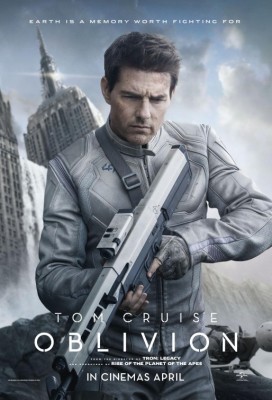 Many are going to be quick to compare this to Joseph Kosinski's previous effort, and words to follow probably wouldn't be very kind. That being said, I actually enjoyed Tron: Legacy for what it was - a gorgeous ride on the back of popcorn fun (even though its narrative was devastatingly flawed) - so I was curious to see what the director would drum up with Oblivion. Well, if there's a single word I'd use to describe this film, it's 'ambitious'. From a marketing standpoint, it's the first science fiction film to break through the gates of summer, and Universal Studios is undoubtedly hoping to avoid competition from the likes of Star Trek, After Earth and Pacific Rim. To this end, advertising has been particularly effective - The trailer hinted at an imaginative, yet familiar post-apocalyptic world that could have been as visually arresting as Avatar, and there was only enough plot provided to pique our curiosity. But, is ambition and intelligent marketing alone enough to leave a lasting impression on the masses?

To find the answer, let's begin by breaking down the plot - The year is 2073, and it's been six long decades since an alien race - known as Scavs - destroyed our moon and thrust our world into a series of cataclysmic events. In a last ditch effort to save the remnants of humanity, the powers that be launched the nukes they had at their disposal. This drastic action ultimately won the war, but left our planet mostly uninhabitable, so everyone was eventually transported to Saturn's largest moon, Titan. Well... almost everyone. Jack Harper (Tom Cruise) and Victoria Olsen (Andrea Riseborough), his combination superior officer and lover, have been left behind to extract the last of Earth's resources.

It seems like a pretty sweet gig, being the last man and woman on Earth... but it came with a price. Jack's memory was wiped to protect the mission, and now he's being haunted by dreams of a beautiful woman from a pre-Scav era. He can't recall if she was someone he knew, or just a figment of his imagination. To add to his troubles, the small remainder of Scavs are beginning to make some unpredictably bold moves - They're knocking security drones out of the sky at an alarming rate, are caught sending a homing beacon to something somewhere in space, and even make an aggressive effort to capture Jack alive. There's only two weeks before the proverbial 'Adam and Eve' are supposed to join up with the rest of humanity, so our 'effective team' have little time to figure out what the Scavs are hoping to accomplish.

The premise is a fairly simple way to get us off the ground, but I'd be lying if I said it didn't tickle the science fiction nerd from within. I've always been fascinated by how much of an integral role our moon plays in the stability of our planet, and being tired of the typical doom and gloom caused by global warming or colliding comets, it was refreshing to see the moon's destruction set the stage for once. Of course, you have to pull off a believable post-apocalyptic landscape if you want to sell the idea, but Kosinksi has done a marvelous job at bringing this vision to life. Jack lives in a beautiful home that sits atop a tower above the clouds, as Earth's lower atmosphere is often raging with violent lightning storms. A row of massive columns act as a devastating, yet oddly beautiful piece of scenery as they suck massive amounts of water out of the ocean. A triangular technological marvel sits in the sky bigger than the moon ever did. Still, even with all that, it's the planet's surface that truly seals the deal - As Jack and his drones search for any security problems below, we may see a planet that's desolate of the vast grasslands or forestation we're accustomed to, but there's something serene in the simplicity that remains. For example, I thought it would be horrifying to see so many major landmarks buried under dirt and rubble, but since the world has 'moved on' since their destruction, they surprisingly served as beautiful relics, not unlike our perception of the Pyramids or Sphinx today.

Yes, the first half of Oblivion does a nice job of introducing a promising story inside of an immersive world (made all the more jaw-dropping on an IMAX screen). Instead of whipping us along from one action set piece to another, Kosinski exercises a surprising amount of restraint, allowing us to absorb the environment and feel the same sense of awe that Jack does on a daily basis. More importantly, we also get a good sense of Jack's struggle with self and purpose; he's a man who's constantly on the edge of discovery, but hopelessly in the dark nevertheless. Of course, the key word in all this is 'promising', because the film unfortunately loses all sense of scale and wonder in its second half. As soon as we're introduced to a band of underground rebels - led by none other than Morgan Freeman - the film quickly escalates into a frantic flurry of twists and turns. Now, I have nothing against a game changing series of events, but I was able to see every twist and turn come from a mile away. Kosinski claims to be paying homage to 70's sci-fi flicks, but his tributes feel more like direct lifts and ultimately spoil every surprise along the way. To make matters worse, instead of expanding the scale of our adventure, the second half instead opts to squeeze us into a series of boxes - The underground rebels lair, a cabin set alongside a lake, Jack's pod, and what's essentially an oversized sandbox. The end result isn't horrible, mind you, but it's a great disappointment considering how flawless the first half had been executed.

Unfortunately, the acting didn't really grip me the way it should. Oblivion relies heavily on one or two people carrying any given scene, but I was underwhelmed by pretty much everyone. Andrea Riseborough was wonderful as Victoria, but the design of her character never gave her a chance to shine. Olga Kurylenko (as astronaut Julia Rusakova) was oh, so easy on the eyes but bland in most other respects. Morgan Freeman wasn't given enough screen time, and that's a shame. I could literally listen to this guy read a phone book and be enthralled, but he was underutilized. Most surprising of all however, is that Tom Cruise wasn't exactly at the top of his game. Don't get me wrong, he does a damn good job with the material he's been provided, but I didn't feel like I was watching a character on screen... if that makes any sense. Instead, I felt like I was being treated to 'Tom Cruise playing Tom Cruise in the movies'. I do enjoy Tom Cruise flicks more often than not, so perhaps it has something to do with Kosinki's direction, but I've seen better from the famed actor, and consistently, too.

So, back to the original question - Is ambition and intelligent marketing alone enough to leave a lasting impression on the masses? For the next month or so, most definitely. There's plenty in Oblivion that actually works, especially if you're willing to forgive the latter half for its missteps/narrative shortcomings. As casual science fiction popcorn, most filmgoers are going to walk away satisfied. Some may find their experience to echo mine, however. The most frustrating thing about this film, is that Kosinsky's masterful first hour pulled me in with a promise of something bigger and more substantial, but major disappointment set in when he couldn't maintain that greatness throughout. As a result, I have a feeling people will be asking "Oblivion who?" after Star Trek comes out... at least, until the home video campaign begins. Recommended.