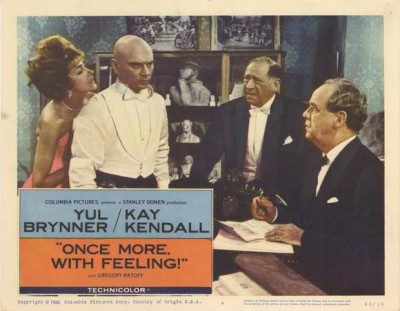 I suppose it's kind of ironic that the director of such classic musicals as Singin' in the Rain and Royal Wedding would make a comedy about musicians that barely has any music in it, but that's part of the joke of Stanley Donen's Once More, with Feeling!. The 1960 adaptation of the stage play by A Shot in the Dark's Harry Kurnitz (who also wrote the film script) stars Yul Brynner as Victor Fabian, an egomaniacal orchestra conductor who can't get past the first four notes of Beethoven's Fifth Symphony after his wife, Dolly (Kay Kendall, in her final role), leaves him.


Dolly was a harpist and both Fabian's muse and his angel, regularly buttering up rich donors to keep her husband's career afloat. It's on one such night of groveling for charity that Dolly returns home to find Victor auditioning a young prodigy for more than just musical accompaniment. The wife understandably storms out, and the artiste's baton goes limp. The plot that spins out of this scenario involves Fabian trying to win Dolly back, at least long enough to sustain a series of concerts in London. Except there's a hitch--well, several, in fact. First, Dolly is already engaged to another man, a scientist (Geoffrey Toone, in an underdeveloped role). Second, she and Fabian were never actually married, so to avoid a scandal they have to figure out how to quietly tie the knot so they can then get a divorce and Dolly is free to remarry without any further scandal. Naturally, Fabian is going to string this along, not just to reinvigorate her artistic prowess, but would you believe that the big jerk loves her, as well?


Once More, with Feeling! is blessed with an ingenious screwball plot, but tonally can't find the right mix of speed and absurdity to bring it off. The fault doesn't lie with the actors. Kay Kendall eventually settles into a zany groove as her frustration with her overbearing husband increases, and veteran character actor Gregory Ratoff (All About Eve) digs up some expert vaudevillian shtick as Fabian's Russian manager. By performance standards, it's Brynner who is the weak link. His staccato delivery and unyielding face are perfect for the arrogant Fabian, but it doesn't really suit the romantic portions of this romantic comedy. The love never comes through.


The real problem, though, is that Donen and his cast seem to be operating at two separate levels. The actors show a lot of gusto, even when contending with less-than-sharp writing from Kurnitz, but the direction is more staid and at times even languid. Donen does little more than provide a blank space for the team to perform, there is never a sense of style or direction. It might be fine to be so locked down if Once More, with Feeling! were still confined to the stage, but this is a movie, these things have to move. Comedy, like musicals, requires choreography and orchestration. Sadly, it's not just Victor Fabian who has lost his potency as a conductor, so too has Stanley Donen, at least for this minor release in an otherwise admirable career. (Charade was only two years away, so don't worry; he gets his swagger back.)


Part of the Sony Choice Collection, the studio's manufacture-on-demand label, Once More, with Feeling! comes as a no-frills release. Shown in full color and widescreen, the movie actually looks pretty good. Some of the resolution is soft, but the color has only faded slightly and the transfer has no egregious marks or blemishes.


Note: Though my Blu-Ray player ran Once More, with Feeling! without any problems, my Macbook is unable to read the disc. This has happened to me with a couple of other M-O-D titles, and it's a problem I have no explanation for. Your mileage, as ever, may vary.


The monaural audio mix is clean and clear, with no hiss or off-tones. The music sounds good, and the dialogue comes through sharply.


Rent It. Solid performances make the tepid Once More, with Feeling! fairly watchable, even if the movie never really gathers the steam its plot requires. The popular play about an arrogant symphony conductor (Yul Brynner) trying to win back his wife (Kay Kendall) following a momentary indiscretion has all the makings of a great screwball comedy, but this adaptation stumbles somewhere on the way from stage to screen. Director Stanley Donen never quite seems to find his rhythm, making for a movie that isn't completely terrible, but it isn't all that good either. Like a symphony, romance needs a crescendo; Once More, with Feeling! just kind of dribbles along.