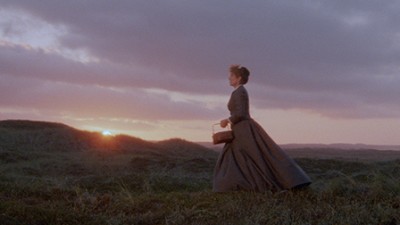 There's a moment in the middle of the third act of Babette's Feast where the Swedish military man, General Lorens Löwenhielm (Jarl Kulle, Smiles on a Summer Night), sinks into reverie while eating the meal that is at the center of Gabriel Axel's 1987 feature. The flavors remind him of a dining experience he had in Paris, and he shares the memory with the rest of the dinner guests, never realizing that, in all likelihood, he is talking about the same chef responsible for his current pleasure, Babette (Stéphane Audran, The Discreet Charm of the Bourgeoisie), who has been in exile in Jutland for many years, having fled the violent revolution that took her husband and son from her. It's the irony of legitimate déjà vu.

I experienced a similar feeling during the first twenty minutes or so while watching Babette's Feast. I had the sensation that I had seen it before, I knew every move. As it turns out, I had been shown the film by a friend of mine who was a big fan. Likely I drank too much wine during the screening and so sort of forgot it happened. My irony is that I had texted her prior to watching it this time around to brag that I had the Blu-ray of one of her favorites. Because I'm an idiot.

It's not altogether outrageous, however, nor outside the realm of the Danish film's thematic intent. Babette's Feast is all about how memory and sensation are linked, how the past is always with us, and the way that denying ourselves the indulgence of any of these pleasures will affect us both in the present and the future.

Axel's film, which he both wrote and directed, is based on a story by Karen Blixen, who is more commonly known as Isak Dinesen). The narrative spans decades, touching down with its characters at three separate times. The first period is when its main duo, daughters of a preacher in a remote Danish village, are young women. Martine and Filippa (played first by Vibeke Hastrup and Hanne Stensgaard, and later by Birgitte Federspiel (Ordet) and Bodil Kjer) are denied suitors by their pious father, who sees their denial of the flesh as extensions of his own work. Both have opportunities for great romance, but both turn away from the possibility. For Martine, it is an attraction between herself and Löwenhielm, back when he was just a lieutenant (Gudmar Wivesson); for Filippa, it's when a visiting singer (Jean-Philippe Lafont) hears her beautiful voice and tries to lure her away to a life on the stage. 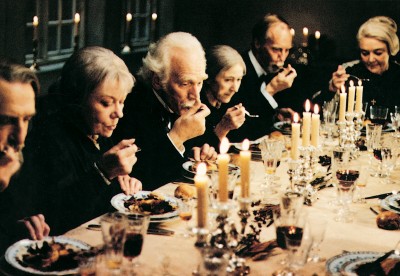 It's actually this singer that causes Babette to enter the sisters' lives. Years later, after their father has passed away, he sends the distraught widow to their shores for refuge. Though they can't afford to pay her, she stays on and joins their family, serving them for more than ten years, living on their bland food while becoming a bright spot in the drab village. The solitude provides her with solace, and Babette is getting along just fine when she receives word that she won the lottery back in France. The sisters fear that now that Babette is a woman of means, she will leave them and return to her homeland. This concern is only encouraged when Babette announces that she'd like to splurge on a real French dinner for the village. Is it a farewell gift?

They need not fear, however; Babette is not looking to make a hasty exit. Rather, the elaborate meal affords her the opportunity to exercise her craft. For her, cooking is an art form, and just as the preacher expresses his spirit through sermons or the singer through song, the chef expresses herself through her food. She nourishes a congregation and elevates her audience. Adding to the metaphor, the feast takes place on the birthday of the girls' father, so the village partakes in tribute to him--despite their private protestations. They will eat to honor Babette, but they will refuse to enjoy it in honor of their late pastor. Naturally, this will be easier said than done, particularly as Löwenhielm has returned to visit for the first time since he left. Now a man of rank and experience, the General acts as a kind of teacher or guide, demonstrating how to appreciate Babette's cooking in full. By the final course, the diners are satiated, and the feast has served to bring them closer together.

What makes Babette's Feast special is how this is all so elegantly understated. Axel does not resort to histrionics or dramatic revelations. His film actually develops in a manner that reverses the common technique: he begins by expressing more, and he ends by expressing less. The start of the movie, which features the history of Martine and Filippa in flashback, is narrated by Ghita Nørby (Everlasting Moments), presumably reading Dinesen's original prose. The voiceover is all but gone by the time of Babette's dinner. The drama eases into a kind of food coma, inner tensions being released with the loosening of the belt.

In terms of performance, the actors in Babette's Feast take a reserved approach. There is not a lot of dialogue, very little by way of heart-to-heart conversations; what is important is what is not said, what they do not do. By contrast, the visiting singer is larger than life in how he approaches song, which is seen as scandalous; in old age, he comes to understand the lasting satisfaction of virtue, but his understanding is arguably deeper because he knows the balance between excess and reduction. Likewise, when the younger Löwenhielm returns to the Royal court, the soldier carries with him the lessons he learned while courting Martine, and he uses it to endear himself to the Queen and charm his future wife. It's what many of the villagers actually forgot by the time of his return: be honest, direct, and humble in all things.

Babette's Feast was shot on location and lovingly photographed by Henning Kristiansen. A wonderful variety of colors naturally occur at the seaside locale, the gray ocean and rocky beach playing off the blue skies and sunshine, cold versus warmth. The locals dress in dark clothes that match the patch of earth upon which they live, and Babette's red hair, much like Löwenhielm's blue uniform, stands out in sharp relief in much the same way a sunset banishes clouds. They are not from here, they are different--but then, so is God's grace. He gave us these pleasures to enjoy, not to renounce. The food that Babette makes is complex and graceful and as much a joy to look at as we would presume it is to eat; likewise, Babette's Feast could be described in the same way, a banquet for the eyes, an elegantly complex cinematic indulgence. 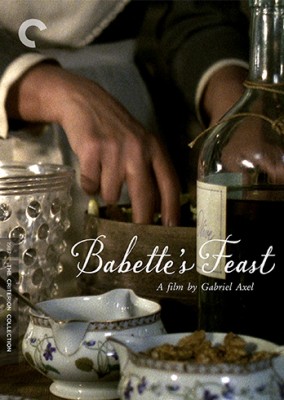 Video:
Criterion releases Babette's Feast on Blu-ray using a new 2K digital transfer, shown in the film's original 1.66:1 aspect ratio. The new restoration is gorgeous, with rich and varied colors, and an impressive level of detail. The balance between the darker tones and the brighter hues maintains the subtlety of Kristiansen's original photography, while also employing a fine grain that preserves the true nature of the film stock. There are some marks on the image during the opening credits, but these appear to be on the picture themselves and not an error or oversight; no such marks occur in the main story.

Sound:
The original multilanguage soundtrack has been upgraded to a 2.0 DTA-HD Master Audio surround mix. Babette's Feast is a quiet film, so what we don't hear is as important as what we do, and the new mix allows for understatement while also making sure that ambient detail is present and the dialogue is clear.

The removable English subtitles are easy to read and well written.

Extras:
Babette's Feast is packaged in a nice, sturdy cardboard case that allows room for the thick, 64-page accompanying booklet. In addition to photographs and credits from the film, the book contains new liner notes and reprints Isak Dinesen's original story. Dinesen, a.k.a. Karen Blixen, is also featured in the 90-minute documentary Karen Blixen - Storyteller, originally released in 1995. It's an illuminating look at an interesting life. Filmmaker Michael Almereyda (the Ethan Hawke-version of Hamlet) also studies the connection between the author's original story and the film in his 26-minute video essay.

For more film-specific extras, we are provided a short interview with director Gabriel Axel and a more extensive interview with Stéphane Audran, who looks back on her important role as Babette. Adding to this is an featurette regarding French cuisine with sociologist Priscilla Parkhust Ferguson, which runs just over 15 minutes.

All of the supplements are in HD.

FINAL THOUGHTS:
It's hard not to make food similes when writing about Babette's Feast. The smartly prepared drama is arranged like a good meal, complete with appetizers and a main course. Its pleasures are distinct, yet controlled and sometimes subtle in their flavors. Yet, you will finish feeling full and satisfied. The Criterion Blu-ray looks marvelous, and the supplements only add to the nutritional aspects of this particular cinematic banquet. Highly Recommended. 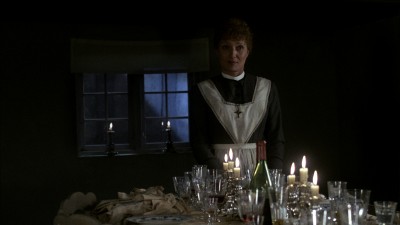