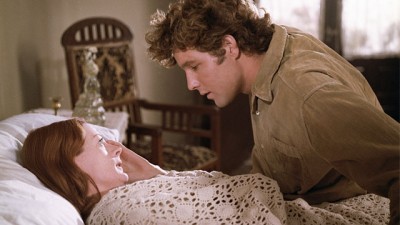 Two troubled souls running from lives they'd rather not face find each other out in the world and fall in love. Such is the stuff of great romance, as well as the clichés upon which many a tepid love story fizzles. Love and Pain and the Whole Damn Thing, a 1973 film from writer Alvin Sargent (Ordinary People) and director Alan J. Pakula (All the President's Men) gets it about half right. They manage to fluff up their cinematic soufflé long enough to whet the audience's appetite, only to have it deflate before we get a chance to dig in.

The Last Picture Show's Timothy Bottoms stars as Walter, a college-aged son of a well-known author who is clearly uncomfortable in his own skin. When it came to developing his "fight or flight" skills, Walter settled entirely on the latter, and lost as to what to do with the boy, his father sends him on a bicycle tour of Spain. Not one to stick out such a long trip pedaling, Walter bails from his group and instead jumps onto a bus. There, he meets Lila (Dame Maggie Smith, lately of Downton Abbey), an uptight Englishwoman suffering from a nervous condition. Their loneliness and isolation form a kind of social Venn diagram, and the pair first become friends and then lovers as each shares their particular emotional problems. Smith already has her closed-off Brit routine down pat, but her best moments in Love and Pain are when she's being empathetic or vulnerable. Likewise, Bottoms has no problem being shy and quirky, but where his acting chops really come into play here is in how he manages to portray Walter coming out of his shell.

By the film's middle, the relationship has blossomed and the younger man/older woman dynamic proves an interesting one as the couple hit the road together. Things take a turn for the worse, however, right around the time we are treated to some uncomfortable slapstick revolving around their travel caravan. (Listen to that foley when Timothy Bottoms literally goes splat in the mud!) Love and Pain and the Whole Damn Thing has a disappointing third act, made up of equal parts bodice-ripper convention (a handsome, yet untrustworthy Spanish duke with a castle!) and 1970s drippiness. It's hard not to see Lila's anxieties morphing into a fatal illness as some studio executive's demand that Pakula deliver him a new version of Love Story. "People like it when the girl dies!"

The drama is not very convincing, nor is it made any more interesting by Pakula's workmanlike direction. Cinematographer Geoffery Unsworth (Superman) embraces the worst of 1970s style, dulling down the natural beauty of the Spanish countryside, photographing everything in gauzy earth tones that are as drab and muted as Michael Small's orchestration is overbearing and full of excess flourish. It's all too bad because what Sargent, Pakula, and their actors begin with has the potential for something quirky and unique. It's like instead of embracing who they are as people, the two oddballs instead become increasingly normal. From forbidden love to an everyday relationship in two easy steps. 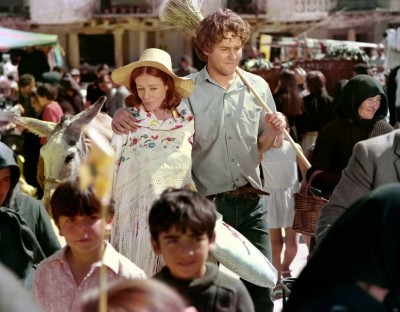 Video:
Released as part of the Sony Choice Collection, this edition of Love and Pain and the Whole Damn Thing is shown in its original widescreen, full-color format. Resolution on the manufacture-on-demand disc is decent, with good levels of grain and decent colors. The overall print quality is clean with no instances of blocking or haziness.

Note: Though my Blu-Ray player ran <Love and Pain and the Whole Damn Thing just fine, my computer is refusing to recognize that there is anything on the disc, hence the images seen here are from promotional materials and not taken directly from the DVD under review.

Sound:
The mono soundtrack is solid, with occasional metallic tones, but overall no glitches, extraneous noise, or hiss. All dialogue is easy to hear, there are no dropouts that I noticed.

FINAL THOUGHTS:
Rent It. Love and Pain and the Whole Damn Thing is about half a good movie. The set-up of two lovers trying to escape difficult existences by traveling through Spain is intriguing, though that may be due more to the presence of actors Timothy Bottoms and Maggie Smith than anything in the script. Because it's the writing that goes sour in the film's back half, slipping between romance genre clichés, making for a muddled third act and a dismal nothing of an ending. 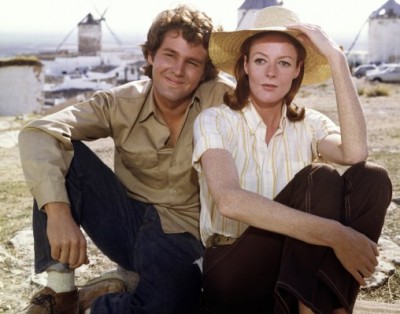