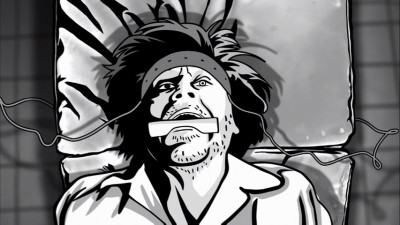 It ain't Pixar, that's for sure. Czech import Alois Nebel uses rotoscoped animation to tell a mournful, psychologically probing story involving a meek train dispatcher, a politically turbulent landscape, and memories that refuse to fade away.

The story of Alois Nebel originated in a trio of graphic novels by Jaroslav Rudis and Jaromir 99, who also adapted this unique work for the silver screen. Set in late 1989, the film concerns the title character, a middle-aged train dispatcher who has been working at the same isolated station on the Czech-Polish border for more than forty years. The unassuming Alois Nebel has conformed his life to the demands of his job: precisely and solitarily. Although he deals with other railway employees, he prefers to be alone with his cat and his obsessively kept volumes of old timetables. Whenever the fog rolls into the station, however, he starts hallucinating - ghostly trains and passengers from the past. Alois can't shake these haunting memories, and eventually gets committed to the local mental hospital. It is there that he meets a fellow patient by the name of The Mute, a man who was arrested after crossing the border into Czechoslovakia. The enigmatic Mute, who was carrying an old photograph of significance to the train dispatcher, is given shock treatments and eventually escapes the hospital. After Alois is released, he makes it a priority to try and track The Mute down.

Alois Nebel is a visually stimulating, mildly interesting film which can be confusing to even those with a passing knowledge of Czech history and culture. This is especially so in the second half, when the released Alois finds that he's out of a job due to the so-called "Velvet Revolution" of late 1989, when non-violent public demonstration prompted the collapse of Communist rule in the Czech republic. Having nowhere else to turn, he journeys to the main railway station in Prague. There, he meets a fellow cast-off railroad worker and a kindly washroom attendant whose late husband also worked the rails. Alois' investigation into The Mute eventually takes him back to Bily Potok, the rural train station where he once worked. It also gets him back in contact with another man involved in an altercation at the stop in the 1940s (when Jewish refugees were being transported during World War II). As the past becomes bracingly real for Alois, he is joined by Kveta, the woman from the Prague railway station who has now fallen in love with the modest dispatcher. 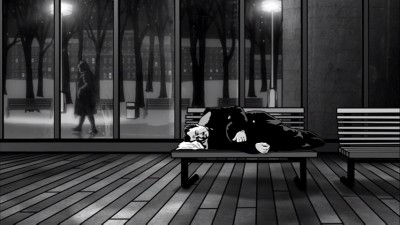 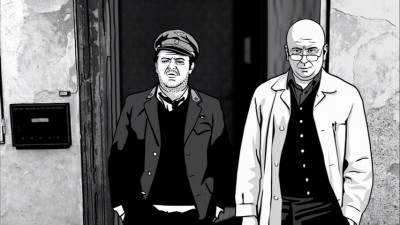 By being created using computer-generated rotoscoped imagery (similar to what was done in Richard Linklater's Waking Life and A Scanner Darkly), Alois Nebel makes a striking impression which almost makes up for what it lacks in other areas. The film's visual style is pure film noir atmospherics - carefully composed, desolate landscapes in contrasting black and white, shadows and light punctuated with soft textures signifying smoke, steam and rain. The rotoscoping (tracing over live action film, a practice used since the 1910s and revived in the PC era) has a hypnotizing effect, although if one looks closely, the figures' overly smooth movements show evidence of taking shortcuts and letting the computers take over (in all honesty, the average Archer episode is better animated). Fans of edgy animated features, such as Waltz with Bashir, will find this a diverting watch.

Terrific visuals aside, the oblique, Czech-centric story and characters in Alois Nebel make the DVD edition more a rental than a keeper. The characters are made out to be deliberately enigmatic and hard to relate with (and thus, the main difference between Alois and something like 2007's Oscar-nominated Persepolis). While one can applaud the filmmakers for centering the story around such an unassuming man, Alois himself winds up being a big cypher. Since the viewer never truly understands what makes him tick, there isn't much reason to invest in him (the many supporting characters come across even more sketchily). The specific historic context that this story is placed in might have been overcome by a decently structured story, but that aspect is also a letdown - the entire sequence with Alois in Prague seemed like unnecessary padding, for one. If there's one thing in Alois Nebel's favor, the computer-generated settings are evocative and beautiful. 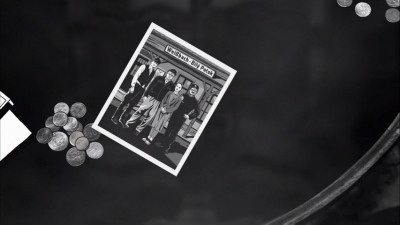 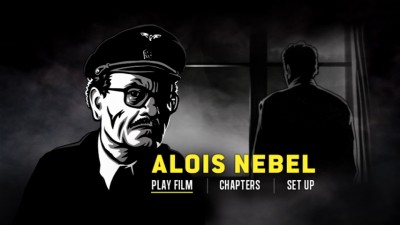 Zeitgeist Films' DVD edition of Alois Nebel attractively preserves the film's digitally crafted, monochromatic imagery in 16:9 anamorphic widescreen. For a film with lots of sharp edges, the transfer has a pleasantly soft, attractive feel that conveys the atmosphere the filmmakers intended. Grey levels throughout are on target, and instances where the screen is dominated by darks never come across as murky.

The sole audio option on this disc is the film's original Czech soundtrack, presented in a pleasing stereo mix that combines well-modulated dialogue with atmospheric sound effects. Not very showy, but fine. Optional English subtitles in black-outlined white are also offered.

A film like Alois Nebel, with its wealth of interesting historical background and unique production methods, would seem like a natural for a supplement-packed DVD. Alas, there's not even a theatrical trailer here. I'm not one who thinks every home video released ought to be stuffed with extras, but the lack of extras for a release that needs some added context is disheartening.

The animated 2011 Czech feature Alois Nebel uses the collapse of that country's Communist regime as the backdrop for its noirish story of a stoic train dispatcher whose past comes back to haunt him. While stunning visuals and an edgy theme place it in the same vein as Persepolis and Waltz with Bashir, Alois Nebel's story and animation isn't nearly as thoughtfully done (and, therefore, not so essential). Zeitgeist's DVD edition offers a solid, good looking transfer, but the lack of background info on a project this enigmatic makes it a slight letdown. Rent It. 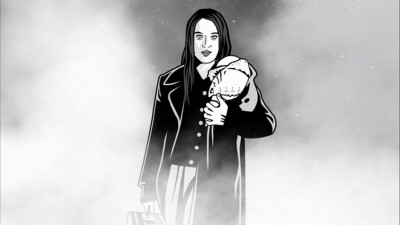 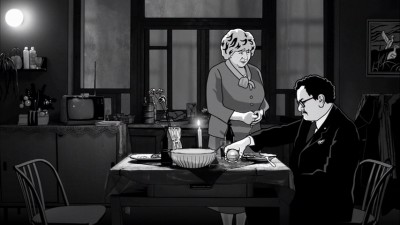