"He had the life expectancy of a match..." - ad slogan for The Key 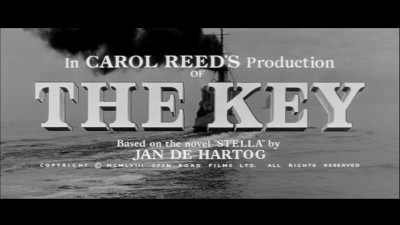 Carol Reed's 1958 movie The Key turns the British director's lens on an otherwise unheralded aspect of WWII combat: tug boat crews. Set prior to the bombing of Pearl Harbor, The Key stars William Holden as David Ross, a Canadian sailor assigned to a vessel in the British Navy. (Holden's all-American image is acknowledged jokingly: few accept him as a citizen from North of the U.S. border.) Ross isn't entirely prepared for his forthcoming duties. It's the tugboat's job to head out into dangerous waters and haul back ships crippled by German U-Boats. They do so by facing the same danger as their quarry, but with barely a gun on their decks.

At his new base, Ross is reunited with Chris (Trevor Howard, Brief Encounter), his shipmate from days past. Chris is an old hand at the tug business, and he shows his buddy the ropes. This includes the cushy apartment, located at the top of winding stairs in a towering building, that has housed more than one condemned tugboat commander. Each is invited to take over the place by his predecessor. The invitation is the extra door key, handed over to the next worthy candidate when the new occupant takes over. The war may be young, but it's practically a tradition.

Here's the catch: with the apartment you also get the beautiful woman who lives there. Stella (Sophia Loren, Two Women) spends all her waking hours inside the flat, worrying over her seafaring lovers. Superstitious Navy men think she's bad luck; indeed, she has a certain clairvoyance. Ross can see that she knows darkness is waiting for Chris before his final voyage. He tries to do the right thing when his friend is lost to the sea, but he soon finds himself using the key and slipping into the expected role. 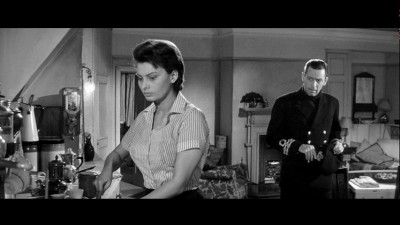 Reed's movie is written by Carl Foreman (High Noon), adapted from a novel by Jan De Hartog. The Key is a dark film, more existential treatise than war picture. The words "sober" and "morose" come to mind. The story is burdened by a romantic fatalism: these men are all doomed, and this apartment, and its hostess, merely the waiting room and its steward. This is purgatory. Ironically, the men who captain these tugs are charged with leading their fellow warriors away from death, to push against the current on the River Styx. The price they pay for this heroism is to eventually die themselves.

Unsurprisingly, Ross makes a life with Stella. He gives her the agency to make her own choice at the start, and they come to each other gradually. The longer he survives, the more comfortable Stella becomes with him. She even begins to leave the house and do her own shopping. In a movie full of bad omens (Chris spills wine all over himself, and jokes that he is bleeding), Stella ignores one of the worst: the labor office believes she died in a bombing and is reluctant to bring her on for volunteer work. Is it possible she really is dead and the idea of the apartment as a way station before the afterlife not so far-fetched? 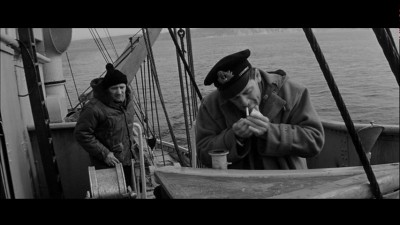 William Holden's best quality is often misconstrued as his happy-go-lucky demeanor. He is a likable lout and a convincing boozer, for sure, but in his most memorable roles (Sunset Boulevard, Stalag 17), his devil-may-care attitude is undercut by a pronounced darkness. The truth is, he does care, he just knows that all these human concerns are a sucker's bet. (His worst performances are in movies like Paris When It Sizzles, when he's just playing for laughs.) Reed uses the actor's natural pessimism to his best advantage, eventually pushing Holden through the cynic's facade: there is a true romantic lurking deep down. This allows the actor to play David Ross as a fighter with a legitimate emotional arc. He is caught between what he feels and what he fears. Thematically, this carries through to a conclusion that is both emotionally devastating and, yet, charged with hope. Ross is Orpheus, ready to pursue his love anywhere. Some might argue that Loren's role is just to provide an object of beauty for these men to fight over, but in truth, there is far more to her than that. Yes, she is limited by her time and circumstance, but this is shown as a tragic product of her situation rather than something she is content with. She is just as afraid of letting herself feel as the men are of her premonitions.

Reed and his cinematographer Oswald Morris (Kubrick's Lolita) collaborate to create a movie every bit as stylish as the director's signature picture, The Third Man. Yet, where that Orson Welles vehicle made great use of confined, unnatural spaces, here Reed places his doomed heroes in natural locales that are wide open. Nothing so emphasizes the smallness of mortal man than the limitless ocean. This doesn't mean Reed doesn't indulge in more stylized, artificial locales. Supporting my underworld theories, the nightclubs the Navy men frequent are debauched way stations where the damned dance in time in order to pretend they are beating it. Late in the picture, when Stella leaves by train, the steam in the station has an eerie noirish quality. Her train more disappears than it departs, the exit tunnel really going nowhere.

The Key makes for a unique, confounding, soulful wartime tale. It is dark and brooding, yet it's also romantic and, in its way, triumphant. It deals with uncommon subject matter, particularly when it comes to male and female relations, but it does so in a smart, challenging way. I kept expecting Carol Reed to pull a punch or two, but he never does. In fact, he continually builds emotional tension by confounding our expectations and refusing to do what other filmmakers would do. The Key is a hidden treasure in the sea of cinema, rewarding all who sail on her. 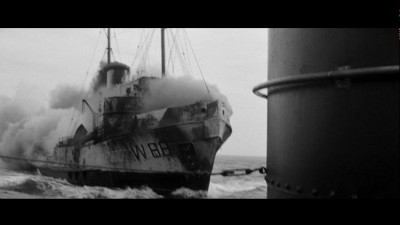 Video:
Sony has issued The Key as part of their manufacture-on-demand Choice Collection, and its widescreen black-and-white transfer is one of the better I've seen in the line. The print has few marks, and the image is clear throughout. There is good balance between light and dark and a consistent line quality start to finish.

Sound:
The original soundtrack has been mixed in mono and is crisp and clear for the most part. Tones are warm, and there is no hiss; however, there are a couple of glitches, including one noticeable pop followed by a brief dropout. These hiccups are minor, though, and pass quickly.

FINAL THOUGHTS:
Highly Recommended. This unconventional 1958 war picture is a pleasant surprise--albeit darkly pleasant, like bitter chocolate. William Holden stars in The Key as a haunted tugboat captain--haunted by his past, haunted by the loss of combat, and haunted by the beautiful woman in the empty apartment that many a captain before him has passed through on their way to the next world. Sophia Loren plays the woman, Stella, and so one can see why sailors are drawn to this particular siren. Third Man-director Carol Reed helms this black cruiser, and he does so with ponderous panache. The Key is definitely a movie worth unlocking. 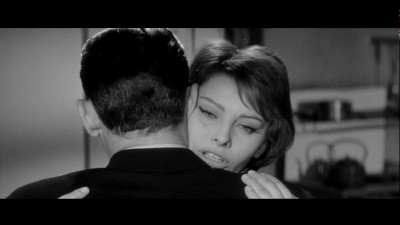