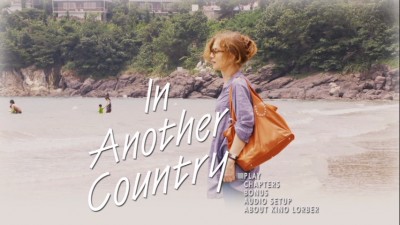 Following on the heels of the mesmerizing, elliptical The Day He Arrives, South Korean filmmaker Hong Sang-Soo returns with his own unique take on cinematic romance. Like his previous film, In Another Country relies on a little storytelling trickery, using repetition and revision to come at the same set-up from a variety of different angles.

In Another Country begins in a seaside town where a young girl (Jeong Yu-mi) and her mother (Yoon Yeo-jeong, The Housemaid) are holing up waiting to see how a family crisis turns out. Bored with the situation, the girl takes pen to paper, abandoning her diary to write a fictional script about a female film director (Isabelle Huppert, White Material) visiting from France that she briefly met at a film festival. The girl casts the woman in three different variations of the same situation:

In all three versions, Huppert's character, Anne, chases after love, either narrowly missing it or finding it, only to have it turn out to be different than she expected. The "stranger in a strange land" theme hinted at by the title--and indeed, being a play on an overly common romance novel plot point--emerges as Anne both struggles with foreign (to her) customs and experiences a bit of a language barrier due to her inability to speak Korean. In some cases, this allows jealous wives and confounded observers to comment on her behavior. In other instances, it causes confusion, both comical and tragic. In at least one of the segments, the possibility of love disintegrates when a sincere expression of affection is lost in translation. In each anecdote, Anne is searching for a lighthouse, though she only finds what she's looking for in one of them. 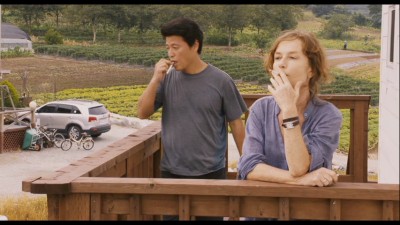 It's actually ironic, because Anne usually asks a kindly lifeguard (Yu Jun-sang, Tell Me Something) directions to the building, and despite it being his job to watch over the waters, just as the missing lighthouse would, he neither knows the word nor where such a thing might be. In all three scenarios, this younger man serves as a temptation, as a typical symbol of hope straight out of any number of bodice rippers, but in each he also fails to live up to the cliché of the earthy man of action who will save the unappreciated older beauty from her more cerebral, business-oriented partner's negligence. The lifeguard is just as unpredictable and undependable as the director, coming off as both dim and, in the middle story, obsessive. The director is alternately pathetic, distant, and lecherous. Men, can't live with them, can barely have sex with them...am I right, ladies?

Not that Anne herself is always that great. She can be aloof, fickle, and selfish. Yet, we forgive her, because she is searching. For love? Perhaps. For illumination? Sure. We have the symbol of the lighthouse and also her circular conversation with a Buddhist monk (Youngoak Kim) in chapter 3. After talking to him, Anne sets out to follow the "unknown path." This not only gives us the final, inevitable, and yet sublime image that closes the movie, but also serves to explain the girl's writing process, what she is doing with her script: not just trying to alleviate her boredom, but searching for something meaningful, trying out the divergent story lines to see what emerges from them. 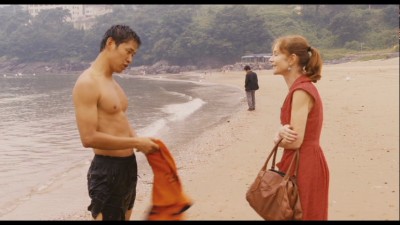 It's actually a little sweet that the girl puts herself in the story as a helpful observer, giving Anne instructions and information or providing her with an umbrella to shelter her from the rain--arguably the kindest and most romantic gesture in all of In Another Country. It's the author shepherding her creation, and Jeong Yu-mi, along with Isabelle Huppert and Yu Jun-sang, is one of the few constants in terms of casting and characters. The most mercurial and least dependable participant, the director, is played by two different actors. In the first and third chapters, he is Hye Ho Kwon; in the second, he is Keun Moon Sung. This is not altogether arbitrary. Like David Lynch or Luis Buñuel, directors infamous for switching performers midstream, Hong Sang-Soo is pulling this switcheroo to illustrate how capricious a lover can be. Kwon's version is definitely different than Sung's. In both of Kwon's segments, he is married and his wife (Moon So-ri, Oasis) is with child, and yet he is pushy and pitiable with Anne. On the other hand, Sung plays him as more self-involved and disinterested. In the end of that chapter, Anne comically takes her frustrations out on the man, slapping him between kisses, but unable to say why. Presumably she is taking out the anger of all three of her lonely selves, and that of their author, as well.

The sum total of all these parts is an accumulation of perspective, and it's fairly spectacular. In Another Country is thought-provoking and funny, twisting and bending the romance genre to the will of the auteur; yet, I also found it surprisingly touching and strangely uplifting. For all the foibles and fumbles, Hong Sang-Soo's portrayal of these emotional bullies and nitwits is kind-hearted. He wishes better for them, but until they manage to figure out where that unknown path leads, he accepts them for who they are. 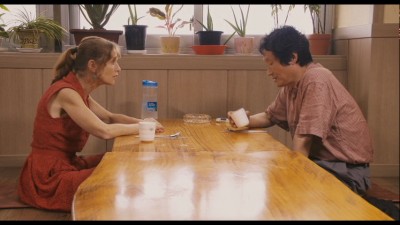 Video:
Shown in its intended 1.85:1 aspect ratio, Kino Lorber's release of In Another Country is a good, but imperfect transfer. The image is clear and clean, with nice colors and a general decent level of detail; however, you will notice some soft edges and smoothed over surfaces that sacrifices some of the crispness of the original cinematic presentation.

Sound:
Dueling 2.0 and 5.1 mixes of the original multilingual soundtrack should service viewers regardless of which choice they make. Both are rich and full, without drop-outs or any extra noise, with the advantage, of course, going to the multi-channel mix in terms of added space and achieving the full aural ambience.

Extras:
A trailer for the film is included, along with trailers for two other Kino Lorber films.

FINAL THOUGHTS:
Highly Recommended. In Another Country is another winner from South Korean auteur Hong Sang-soo. His smart and funny take on the romance genre is just as challenging as we would expect from the director, telling three similar stories, revising the romantic adventures of a French woman (Isabelle Huppert) traveling on her own in Korea. With each redo, we see the love affair from a different angle, examining the mistakes, both innocent and not-so innocent, and observing the quirks of human behavior that both bring us together and push us apart. 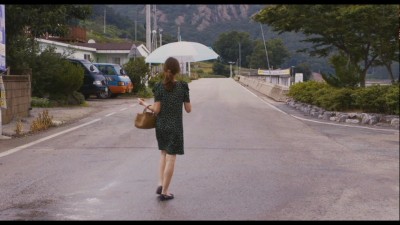