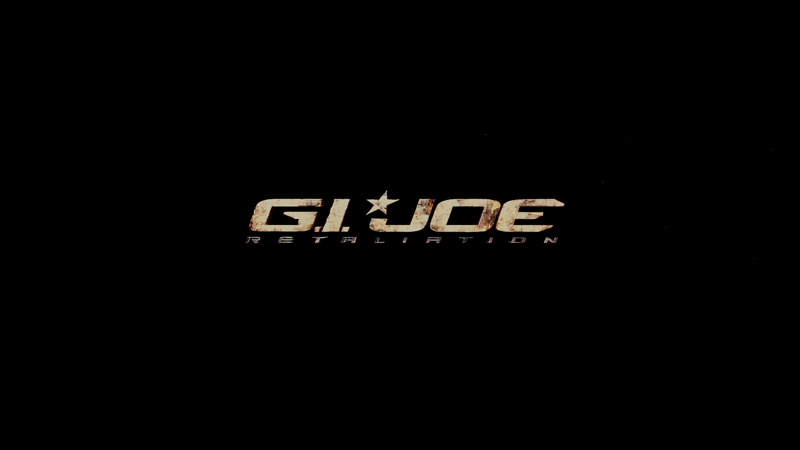 
The Movie
Admittedly, being a part of movie and TV criticism makes it easier to accomplish, but I have a lot of G.I. Joe stuff surrounding me as I write this review. I can picture my young afternoons watching the latest episode of G.I. Joe after school with a clarity Sony's 4K television could only wish to achieve, as I watched eagerly to see if Cobra would get the next piece of DNA in order to create their ultimate leader, Serpentor. And afterward, I would head out into the yard with my figures and act out my own jungle adventures in the wilds of the front lawn, pitting the good-guy Joes against Cobra, an evil organization that was much sharper sartorially. This went on for the normal length of time, until I discovered other ways to entertain myself that didn't involve international cabals of weapons dealers and loosely allied ninja warriors. But those characters left their mark, which is still there today, as I can fondly watch pretty much any episode from the show's original run.

It seemed like I would have been smack dab in the middle of the target audience when Hasbro and Paramount teamed up in 2009 to release a modern live-action movie of G.I. Joe, but when Marlon Wayans and mechanically-advanced exo-skeletons became part of the story under Stephen Sommers' watch, it quickly came to reason I was about 20 years older than the ticket-buyers they were looking for. However, the reaction of the movie-going audience indicated that though they wanted a G.I. Joe movie, this was not the one they really wanted. So out went Sommers, in came dance-movie director Jon M. Chu, some bigger stars and a more grounded approach to the characters. The trailer created some definite hype, with gravity-defying ninja fights, big explosions and Bruce Friggin' Willis, but it then sat on the shelf for almost a year, for a few reasons, before finally making its debut. 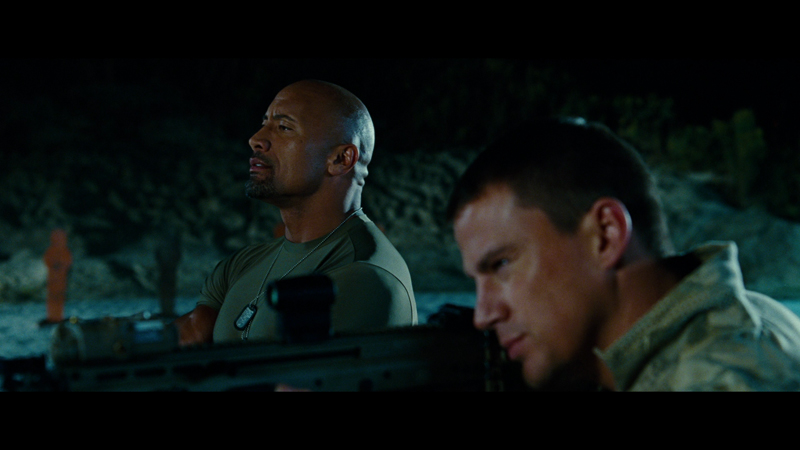 Considering the act it was following, the bar was set pretty low, and simply by introducing Dwayne Johnson as everyone's favorite gumbo-slingin' Cajun chef Roadblock, Retaliation was ahead of the game. This was a legitimate action star, which probably meant a legitimate action movie. Throw in the obscenely sexy Adrianne Palicki as Lady Jaye (a major step up from the first film's eye candy) and bring back Byung-Hun Lee and Ray Park as ninjas extraordinaires Storm Shadow and Snake-Eyes, respectively, and you've got the makings of a solid comeback story. But after a fun mood-setting cold open, you're treated to an extensive bit of exposition from the first movie, bringing everyone up to speed on where we stand. Requiring your audience to sit through the cinematic equivalent of "Last time...on Gi.I. Joe" shows a lack of faith in the storytelling, which is never a positive, especially when the story in the first film wasn't exactly a brain-bender, and, in the big scheme of things, doesn't really matter here anyway.

So once we're all caught up (the big plot point being that the President of the United States (Jonathan Pryce) has been replaced by Zartan (Arnold Vosloo), the Cobra master of disguise) the movie can get down to business kicking sand in the face of the Joes. A Cobra conspiracy decimates the team and positions them as enemies of the state, which is just the first stage of a plan for world domination by Cobra Commander (played with more evil gusto by a pair of actors now, instead of Joseph Gordon-Levitt's more cartoonish take in the first movie.) With no allies, a trio of Joes, led by Roadblock, have to stop Cobra's plan to destroy the world. Honestly, it's not a lot different than your average episode of the cartoon, just a lot darker and grittier. In fact, the film is loaded with fan-service thanks to Chu's enthusiasm for the old toys, cartoon and comics, with great vehicles like the H.I.S.S. brought to life, and an extensive wordless homage to one of the best-loved issues of the Marvel comic, "Silent Interlude."

Though the movie doesn't exactly break new ground, it doesn't mean Retaliation doesn't have its moments, because it certainly does. A side mission by Snake-Eyes (and obscure fellow ninja Jinx) to a mountain-top monastery sets up some impressive fight scenes and a somewhat ridiculous zip-line chase through the mountains, while Pryce is fantastic as Zartan, leading the world's leaders into a game of nuclear chicken (with touches of Dr. Strangelove), projecting such incredibly darkness (not to mention giving us a genuinely upsetting look at a devasting attack on a world capital.) The bad guys seem to have all the fun, especially newcomer Firefly, an explosives expert played with creepy glee by Ray Stevenson. If you ever find yourself cheering for the wrong team, these two gentleman get all the blame, for making it look like so much fun.

Despite the good stuff, there's a sense of artificiality and a lack of genuine stakes to the proceedings that makes everything feel a bit meaningless. Perhaps it's the structure of the film, where the Joes lose everything right off the bat, that causes this to happen but something about the way the action scenes are pulled off that feels a touch distant. Perhaps its the overwhelming presence of the sound effects that makes it feel a bit too cartoonish. Whatever it is, there's a lack of fun overall from a movie that feels like the perfect venue for it. The balance of humor is much better than in the borderline-campy first movie, and there are a few solid performances, but it's missing that sense of "Gee whiz" a great action movie delivers.

Beyond that, the less said about the casting of the RZA as a blind ninja master, the better. We get that he loves old kung-fu movies. Many of us do. But this is not an old kung-fu movie, and Quentin Tarantino is nowhere to be seen. He's just entirely out of place. 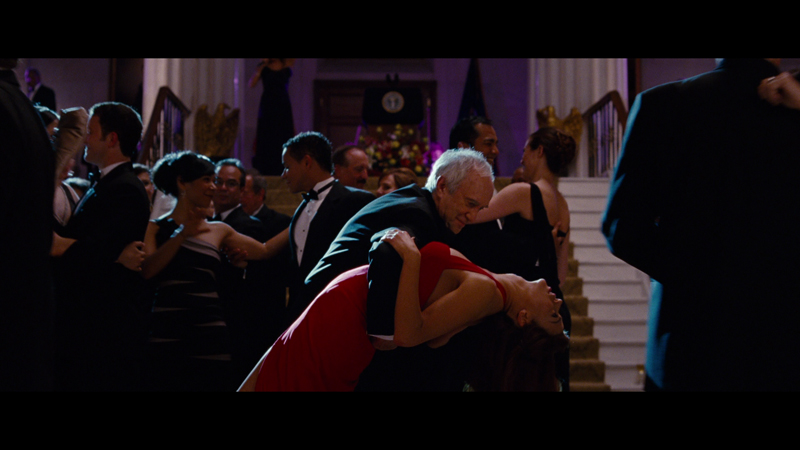 The Discs
Released with a Blu-Ray and DVD, this film arrives in a standard Blu-ray keepcase inside an embossed slipcover. The Blu-ray has a nicely-design animated menu (which changes depending on your choice of being with the Joes or Cobra) with options to watch the film, select scenes, adjust languages and check out the extras. Audio options include English Dolby TrueHD 7.1 and French, Spanish and Portuguese Dolby Digital 5.1 tracks, while subtitles are available in English, English SDH, French, Spanish and Portuguese.

The Quality
The 1080p, AVC-encoded transfer here is gorgeous, with a clarity and level of fine detail that would be hard to surpass. Everything is covered with wonderfully detailed textures, black levels are nice and deep and colors are bright and vivid (when appropriate) without burning too bright. There are no issues with compression artifacts or other digital distractions either. If anything, the perfection of the image lends to a slight feeling of artificiality that runs throughout the film, even if the many visual effects blend better than on most recent films. But that's just whining.

As good as this movie looks, the audio is what grabs your attention most of all, as a cavalcade of aural activity comes barrelling your way thanks to the TrueHD 7.1 track. From the production logos on, there's action from every direction, and it's not just overwhelming noise, but precisely placed effects that really help put you right into the world of G.I. Joe, as explosions and gunfire surround you, thanks to impressive directionality and a strong low-end. Dialogue and atmospheric effects (as well as the at-times underplayed score) are also well-handled. The audio track here is an experience all on its own.

The Extras
Up first is an informative track from Chu and producer Lorenzo di Bonaventura, with di Bonaventura acting partially like a moderator, while also throwing in tidbits when appropriate. A lot of the discussion focuses on how the film differs from the first movie, how certain shots were achieved, cuts that were made and the usual proud fawning, along with some fun trivia, including the identity of the Hollywood auteur behind di Bonaventura's production logo, and the story of its origin. It's interesting to hear the two men's differing perspectives on the Joe franchise, as they come from different generation of toy fans.

An extensive look behind the scenes is next in the eight-part, nearly 73-minute long "G.I. Joe: Declassified." Broken down into various themes and topics in the film, including Chu's vision for the film, the training the actors were put through, some of the bigger scenes and sets and the history of G.I. Joe as it relates to the film. Via on-set footage and interviews with cast and crew, there's plenty of info about the making of the movie, and it doesn't overlap much with the commentary track. Thanks to the visuals, you also get a real appreciation for the scale of the sets, even when shooting with greenscreen.

There's a trio of deleted scenes, which check in at a hair under four minutes in all. These moments were best left out of the final film, especially since a key plot point received a better revelation by not showing it explicitly. That doesn't mean they aren't entertaining though. Each has its charms, especially when Pryce gets to play his evil President to the hilt.

Also included with the set is a code for an Ultraviolet download or stream of the movie, as well as a code to order your own free set of personalized dog tags (though this offer is not yet active, so details are scarce.) 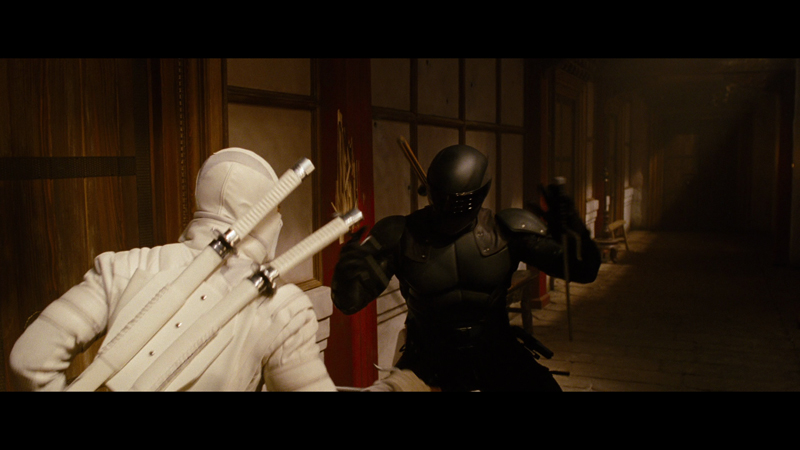 The Bottom Line
The first G.I. Joe film wasn't a favorite for many, especially fans of the ‘80s Joes, but the trailer for Retaliation offered plenty of promise, with more big names and impressive visuals. The film itself was certainly better for fans of the animated team, and delivers plenty of fireworks and fan service, but it falls just short of being the blow-out most fans hoped for, for a number of reasons. On the plus side, this set looks and sounds amazing and delivers some engaging bonus features, making it well-worth adding to your collection if you're a fan of popcorn action movies.