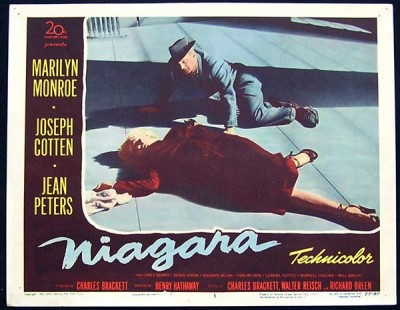 Marilyn Monroe was rarely cast as anything but the sympathetic or comedic love interest, but based on the evidence in Niagara, she could have had a whole other career as a femme fatale. In fact, her performance here stands alongside another of her off-model films, Roy Ward Baker's Don't Bother to Knock, released a year prior, as two of her most interesting. If for nothing else, because the frightened, twitchy woman she becomes in each is unlike the persona she came to develop immediately after in Gentlemen Prefer Blondes and How to Marry a Millionaire. Whereas her nervous condition in Knock has more mystery--part of the film's main plot is finding out why she is the way she is--Niagara provides her with more of an arc. She goes from confident and devious to hunted and afraid. I'd be curious as to how differently her work might have played sixty years ago, when there was at least still a smidgen of an unknown quantity to the actress; now, Marilyn is so intrinsic to pop culture, we forgive and forget even as she commits her crimes, meaning we feel sorry for her despite the fact that she's getting what she deserves.

For Niagara, Marilyn plays Rose Loomis, who has gone to the famous water resort on a second honeymoon with her husband George (Joseph Cotten, Shadow of a Doubt). He has just been discharged from an army hospital, where he was sent for battle fatigue. His mental maladies are still with him, however; Niagara opens with him wandering in the mist by the falls in the early morning. When he returns home, his wife pretends to be asleep. She has had enough of George and is making plans to get rid of him. He suspects this to be the case, though given his neurotic manner, most think it's just paranoia.

The story of the Loomises is juxtaposed with that of the Cutlers, a couple on their first honeymoon, albeit a belated one. Ray (Max Showalter, Sixteen Candles) has gotten a job in the shredded wheat factory on the American side of the falls; he has taken his wife to the Canadian side to celebrate. Whereas Ray is all golly-gee enthusiasm, Polly (Jean Peters, Pickup on South Street) is more calm and reserved. Through a combination of nosey snooping and empathy, Polly becomes embroiled with the Loomis drama. She also gets the movie's best lines, revealing a sense of humor that can equally be aimed at others ("She sure got herself an armful of groceries") and at herself ("For a dress like that, you've got to start laying plans when you're about thirteen"). 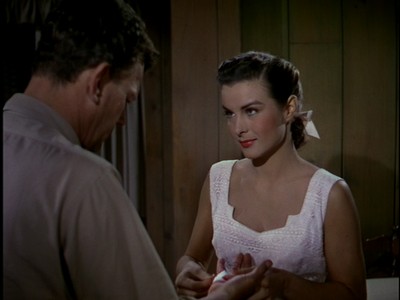 Niagara is directed by Henry Hathaway, who was known early on for westerns and then later, particularly in the years before Niagara, for directing definitive film noir like Kiss of Death and The Dark Corner. Though often lumped in the noir category, Niagara is something slightly different. Its setting and intense romantic storyline have much in common with gothic romance, while its colorful artifice has an element of the women's melodrama, looking not dissimilar to Leave Her to Heaven, but also being in line with the soap operas of Douglas Sirk and Jean Negulesco.

Cotten makes for a convincing brooder, and his dark passions only become more exaggerated and desperate as the movie progresses. He and Monroe are emotional counterweights. When she is up, Cotten is down, and vice versa. This leaves Peters to be the center. Her suspicions regularly give way to complicity, but she never gives in to her more scandalous impulses. Hathaway uses the setting as an environmental engine, the constant beating of the water churning up all the extreme feelings, driving both character and plot. It's fitting that the movie's most violent action is committed higher up. When Rose Loomis flees from her husband, and effectively her own errors in judgment, she runs up a bell tower, as if trying to climb away from the big hole in the earth and the torrents of water that would otherwise drive them under. Hathaway and director of photography Joseph MacDonald (Bigger Than Life) set the camera up high, peering down from the uppermost point in the tower, the shadows of husband and wife exaggerated like they are posing for a Saul Bass poster. It's the most artful shot in the movie, fueled by the inherent grotesqueness of the incident it portrays.

There is, of course, only one direction George Loomis can go after that. The film can only end in the falls, George can only be ground down by irresistible urges. It makes for a nail-biting finale, one that is surprisingly cynical, but that admirably stays true to the dark places where Niagara began. 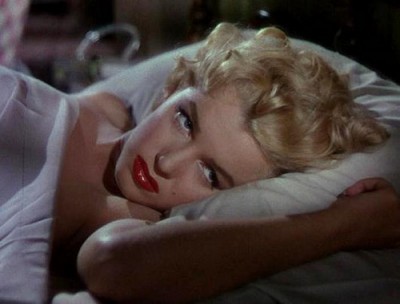 Video:
Fox is releasing Niagara on Blu-ray for its 60th Anniversary. The full-frame HD presentation, 1080p and MPEG-4 AVC encoded, shown at a standard 1.33:1 aspect ratio, is positively breathtaking. Colors are gorgeous, with an impressive level of detail. Fans of the movie will right away notice how exceptional the disc looks when we first see Marilyn, naked in bed, inexplicably wearing the shiniest red lipstick, its hue never dulling or smudging on the pillow. The various textures in the room, and the balance of color, are fantastic. Niagara is a film that in previous home video editions has often burned too hot, which had the ironic effect of making it murky. This is not so on Blu-ray. Every spray of water, every curl of hair, and every cobblestone on the walkway is visible, with proper color timing and no dirt, scratches, or noise.

Sound:
The main audio track gives us the original English sound recording as a DTS-HD Master Audio 5.1. It is very good and fills the speakers nicely without calling attention to itself or overloading the soundtrack with effects. That said, there is also a mono track for the more traditional-minded viewer.

French, German, Italian, Japanese, and two different Spanish dubs are also offered (though not all are listed on the box). There are also about 20 different subtitle choices, including English Closed Captioning.

Extras:
The trailer for Niagara, as well as a handful of other Marilyn Monroe features.

FINAL THOUGHTS:
Highly Recommended. Henry Hathaway's hybrid crime drama Niagara is a sexually potent, psychologically thrilling mix of melodrama and hardboiled action. Marilyn Monroe sizzles as the scheming wife of a troubled vet, played with both sadness and menace by Joseph Cotten. The wonderful Jean Peters rounds out the cast, the unwitting third point in a loveless love triangle. Niagara is now six decades old, but the high-def presentation looks brand new. It's a must see in this format for Marilyn addicts and classic film buffs alike (and you really should be both). 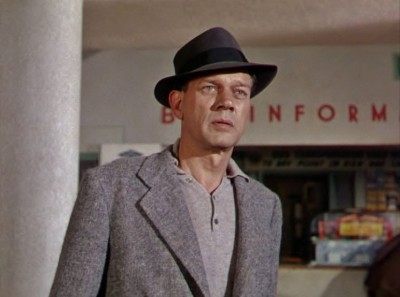