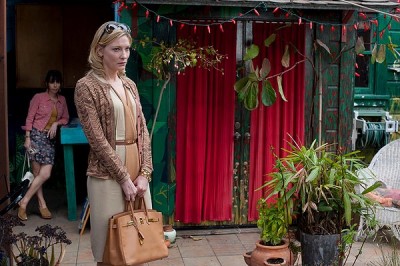 Jasmine has seen better days. The one-time toast of high society is now just toast. Following her husband's exposure as a Bernie Madoff-style con man who squandered the fortunes of others on real estate schemes, Jasmine is friendless, penniless, and utterly unequipped to adapt. Following a nervous breakdown, she is moving across country to live with her adopted sister, Ginger, in San Francisco.

So we begin Blue Jasmine, the latest ethical drama from the ever-prolific Woody Allen. For this new feature he has cast Cate Blanchett in the role of Jasmine (formerly Jeanette) and Sally Hawkins (Happy-Go-Lucky) as Ginger. Alec Baldwin plays Hal, Jasmine's financier husband, seen here in flashbacks. To add further complications to the story, Ginger and her ex-husband (Andrew Dice Clay) sank all of their money into one of Hal's ventures. Both the ex and Ginger's new beau, Chili (Boardwalk Empire's Bobby Cannavale), think Jasmine is pretending not to have known about Hal's cheating, both in the bedroom and boardroom, when she really did. Jasmine doesn't think too highly of these dudes either.

Though, to be more accurate, Jasmine doesn't give anyone who isn't Jasmine much thought. She claims to be broke, but still flies first class. She pops a Xanax almost as often as she downs a martini, and she's prone to mental episodes. The flashbacks to her moneyed life are often vivid fantasies that Jasmine is actively participating in. Allen returns his viewer from these daydreams to the real world to show the woman is not just taking to herself, but carrying on a one-sided conversation out loud with the people she's been dreaming about. 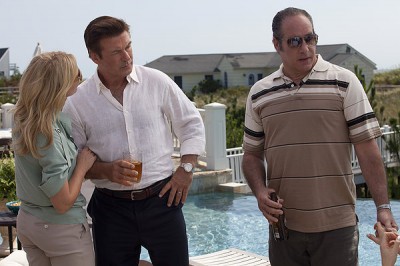 Plenty is likely going to be made of Jasmine and Hal's social position. At first glance, there is much in Blue Jasmine that could be hashtagged away as "white people problems." To dismiss Blue Jasmine under such shallow circumspection is to miss the complicated moral dilemmas in Woody Allen's script. The auteur has a knack for multi-planed dramatic conundrums, and so Blue Jasmine is not a movie about one woman either getting her comeuppance or redemption, it's a knotted story of two sisters who received similar opportunities in early life only to have their futures break in different directions. It's a tale not just about the upper class versus the working class, but of our pretentions and prejudices regarding both. Is doing better, in either romance or business, simply a matter of not settling for less?

Cate Blanchett is remarkable as the frayed trophy wife losing her grip. Her performance is jittery and agitated, but her decisions are purposeful rather than broad. The way she appears in the two different timelines are markedly different, yet inextricably linked. The fragile denial she maintained in married life was self-defensive; the broken person she has become was always just on the other side of the facade. At the same time, she is an unreliable narrator in her own life. The ease with which she lies to others, including a new love interest (Peter Sarsgaard, An Education), is only matched by how many lies she tells herself. 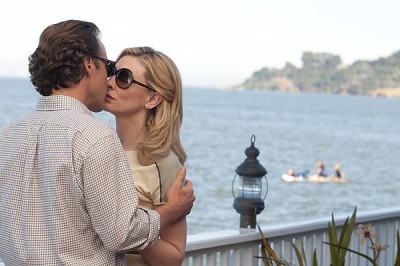 Sally Hawkins makes both an excellent equal and opposite to Blanchett. She is just as unsure of herself, just as defensive, but yet blind to her own self-righteous streaks. While Jasmine always exposes herself, Ginger's duplicity is usually exposed by others. Maybe her sister is right and she does consistently choose the wrong men, as none of them can keep her confidence. Allen is subtly posing a nature vs. nurture debate using the two sisters. Both were adopted separately by the same family, but Ginger alternately blames her lot in life on their adopted mother liking Jasmine more and Jasmine simply having superior genes. Say what you will about the rich sister's delusions, but she never stops encouraging Ginger to demand more for herself. A subplot involving a potential new lover for Ginger (played by Louis C.K.) at least begins to test the possibilities.

Blue Jasmine isn't entirely perfect. There is little that surprises in terms of how Allen stages and shoots his narrative. When it comes to directorial technique, he has long since abandoned developing any new tricks for himself. In a lot of ways, he's actually stuck in the past. As up-to-the-minute as the financial scandals in Blue Jasmine are, there is something quaint and old-fashioned about how Allen deals with them. It's kind of like how all the native San Franciscans have East Coast accents. Woody Allen has never really left Manhattan any more than he has fully come into this century.

Yet, the emotion in his writing is still incisive and insightful. What makes Blue Jasmine such a winner is that Allen never tries to exonerate Jasmine, nor does he even really expect us to feel sorry for her. What he does do, however, is challenge our capacity for sympathy. The way your allegiances will change as Blue Jasmine develops, and how you continue to react to Jasmine right up until the closing shot, says as much about you as a viewer as Allen's movie says about its many characters. 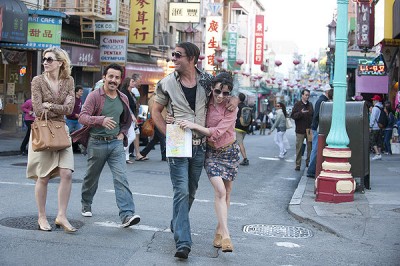