Fox // Unrated // July 30, 2013
List Price: $24.99 [Buy now and save at Amazon]
Review by Stuart Galbraith IV | posted August 8, 2013 | E-mail the Author
Marilyn Monroe gives one of her best performances in Bus Stop (1956), a movie that is also one of her best overall. Originally a Broadway play, it turned out to be an ideal vehicle for Monroe as well, an atypically harmonious arrangement wherein she got to stretch her acting muscles playing a fully three-dimensional character, while Twentieth Century-Fox still got what they wanted also, namely Monroe very sexy in a highly exploitable part. Two more outstanding performances and several very good ones add to Bus Stop's success and, unlike most Fox CinemaScope films of the 1950s, it is subtly effective in its use of the process and its picturesque locations.

An outstanding high-def transfer compensates the lack of extra features. The picture quality is excellent while the equally impressive 4.0 DTS-HD Master Audio, more or less replicating the original 4-track magnetic stereo soundtrack, gets a real workout. 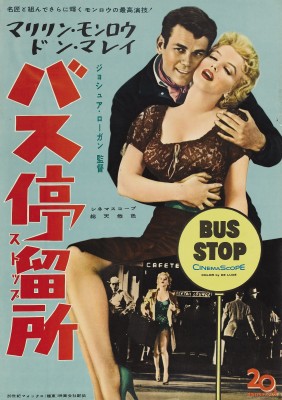 The movie opens with "The Bus Stop Song," a sprightly, hard-to-shake number by Ken Darby and performed by The Four Lads, and later by characters in the movie. For only the second time in his entire life, young and naive cowboy Beauregard "Bo" Decker (Don Murray) leaves his Montana ranch with father figure Virgil (Arthur O'Connell) so that Bo can compete in a rodeo being held in Phoenix, Arizona. Following a brief breakfast at a southeastern Utah bus stop, where bus driver Carl (Robert Bray), worldly Grace (Betty Field), owner of the diner, and Elma (Hope Lange) are introduced, the bus continues on to Phoenix, where Bo is determined to "find me a angel" to marry.

That evening at the Blue Dragon Club, Cherie (Marilyn Monroe), a dancer (and coded prostitute) from the Ozarks, on orders from her abusive boss, uses her sex appeal to hustle customers into buying her expensive drinks. Virgil is targeted, but he soon realizes the "whiskey" she's sipping is actually tea.

Bo enters as she warbles "That Old Black Magic" to disinterested customers. Instantly recognized his future bride and to everyone's amusement, Bo jumps up on a table admonishing everyone for their disrespect. Cherie is touched by Bo's gesture, but increasingly helpless and exasperated when he announces his intentions to marry her. She's appalled by his unrefined presumptuousness but, deep down, is also attracted to him in spite of his uncouth, wildcat behavior.

Helped by friend Vera (Eileen Heckart) she tries to flee, but Bo all but kidnaps her, and despite protests from Virgil drags her aboard the same bus, now bound for Montana. Arriving at Grace's Diner and bus stop during a winter storm, the would-be lovers have it out.

The play opened the year before, with Kim Stanley (Seance on a Wet Afternoon, The Right Stuff) and Albert Salmi (the TV version of Band the Drum Slowly, Daniel Boone) in the roles played in the film by Monroe and Murray. At a time when most big stars did two or three films annually, this was Monroe's first movie in more than a year. She was fed up with the dumb sexpot roles offered her by Fox and, wanting to be taken seriously as an actress, she joined The Actors Studio. Eventually she negotiated a new contract with Fox giving her more control over her films.

Outwardly, Bus Stop seems little different, with Monroe spending most of the film cavorting in a revealing stage costume, with hints of nudity elsewhere, such as one scene where she changes her clothes on the bus when most of the passengers are asleep. (The bus driver, however, gets an eyeful in his rear-view mirror, nearly running the bus off the road.) In an earlier sequence she's seen in bed, apparently nude and, according to Murray, really was naked when they shot it.

Yet Bus Stop is mostly a slight, sweet, funny, and even sexy character study-romance. Monroe, who affects, mostly quite well, a backwoods Arkansas accent, gets to show off a broad range of emotions and innumerable opportunities to react to Bo's outrageousness. She is alternately bemused, annoyed, appalled, yet always attracted to Murray's dumb but handsome, sincere, and ultimately charming cowboy.

Murray, in his screen debut, won the lion's share of accolades, including a well-deserved Academy Award nomination (nonsensically, in the Supporting Role category), which subtly undercut Monroe's contributions, though many agreed she had improved as an actress.

Fox's mid-1950s movies were dominated by CinemaScope spectacles like The Robe (1953) and travelogue-type trifles such as Three Coins in the Fountain (1954). Bus Stop is short on plot but, unusual for the studio at this time, long on intelligent, understated character interaction.

Director Joshua Logan finds the perfect balance, opening up the play to include Phoenix locations and, for the bus stop itself, the snow-covered mountain ranges of Idaho. The locations are beautiful and interesting, but Logan doesn't emphasize them like picture postcards. They stay in the background and are attractive naturally.

Particularly impressive is the way the film manages to integrate Monroe and Murray into a big Phoenix parade and later at the enormous rodeo. Usually it's easy to spot the difference between footage of a real event and material later restaged with the principal actors, often with the actors standing in front of a process screen or in tight shots limiting the number of extras. Here, however, Monroe and Murray navigate what look like a real parade and rodeo in progress. In a couple of shots people in the crowd react to Monroe's presence, and boy does she stand out, but mostly it's seamlessly done.

I'd seen Bus Stop only once before, as a USC cinema school Master's Degree student, in a class that ran an original 35mm CinemaScope print. The color was gone and everything had turned magenta, but the four-track magnetic stereo sound was still in good shape and made a permanent impression. The Blu-ray restores the film's original bright and rich colors while retaining all that was good about the soundtrack, which is crammed with directional dialogue and sound effects, while the musical score sounds particularly robust. A 4.0 French track is also available along with a 1.0 Spanish one, with subtitle options in all three languages. The disc is region A encoded.

The lone extra is the film's original trailer, from a standard-def source bumped up to 1080p, along with trailers for other Monroe-Fox titles.

Genuinely touching, funny, and attractively photographed while sporting good performances by all, especially Monroe, Murray, and O'Connell, the movie and the transfer get high marks.