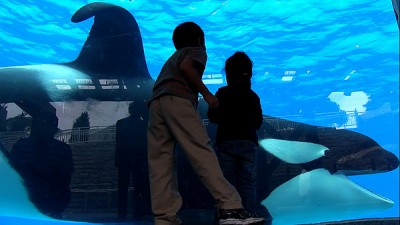 The horrors on view in the orca-themed documentary Blackfish are all the more chilling because they are real. And being an expert horror movie maestro, as well an excellent journalist, director Gabriela Cowperthwaite likely knows that it's the things we don't see that will prey upon our minds the most. The killer whale attacks featured in Blackfish are cobbled together from amateur video and security footage, with specifics being filled in by expert testimony. This means we only witness the start of most of these deadly events and have the rest explained to us. The gruesome details were either missed altogether or have been censored by Sea World executives--yet one's imagination goes wild envisioning the horrific death that comes with having a whale drag you below water.

Blackfish is partially a profile of how orcas are captured and turned into performers at aquatic parks around the world, but its specific thrust is to trace the history of lies and negligence that has led to death and injury at Sea World. Particularly, the three main incidents involving a male whale named Tilikum, whose pattern of violence in captivity does not reflect normal behavior for members of his species who remain in the wild. Rather, Cowperthwaite and her commentators believe it's a developed trait, akin to a psychosis, a result of years of imprisonment, abuse, and a disruption of the creature's natural way. The tragic narrative crescendos with the 2010 killing of a seasoned trainer that prompted a morally questionable response from Sea World and a legal investigation.

The case is pretty convincing. Cowperthwaite builds the argument methodically, avoiding melodrama while also being careful how she anthropomorphizes the water mammals. There is no authorial voice advocating for Tilikum's victim status. She leaves that to the animal trainers, some of whom worked with "Tilly," all of whom had a tenure at Sea World. They speak of their own connection to the animals, and their own emotional reactions to what they saw and heard. Scientists and scholars embellish these views with true facts about orca life.

Blackfish ends up painting a pretty shocking picture of corporate greed and the hubris of mankind. Who knew that Sea World was still big business? Watching the ridiculous and arguably humiliating things the captive whales are forced to do to earn their supper is repulsive unto itself. Have we not gotten beyond such barbaric entertainment in this new century? It brings to mind Werner Herzog's Grizzly Man: when we think nature exists to amuse us, and we forget our place within it, dangerous events follow.

Much of Blackfish is hard to watch, but it's never exploitative. It is, however, effective, and it's pretty easy to see why Sea World is panicking over its release: you've got to be pretty callous to consider ever visiting one of their parks after watching the movie. Of course, Sea World refused to participate or comment. For a company that has otherwise been extremely vocal pushing the bottom line and covering their ass, it's the silence now that's the most damning.