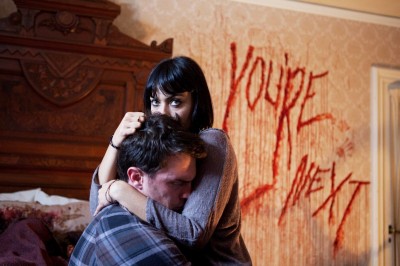 You're Next is basically a home invasion slasher flick that follows a tried-and-true formula for gore and scares. It is successful at both, though not entirely so. It's scrappy and makes good use of its meager budget, but comes up slightly lacking in terms of overall story.

The plot centers around the Davis family, a wealthy clan whose recently retired father and mother have moved into a spacious fixer-upper in the middle of nowhere. The family is not without its dysfunction: the mom has a bad case of nerves, and the oldest son, Drake (Joe Swanberg, LOL), is a bit of a prick who even well into his 30s tortures his younger brother, Crispian (A.J. Bowen, The House of the Devil), the egghead of the unit. Even so, the four children are all coming home for a visit, spouses and significant others in tow. It's during this reunion that they are beset by a trio of masked killers, whom we have already seen murder the closest neighbors. The motive for the attack is initially unknown, but the victims rally under Crispian's surprisingly capable girlfriend, Erin (Sharni Vincent, Step Up 3D). The bulk of You're Next's running time is them trying to sort out what is happening before they all end up dead. 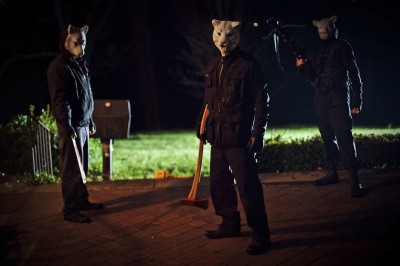 That's pretty much the gist of it without getting into spoilery details revealing the twists that are waiting along the path to the film's bloody climax. You're Next is the handiwork of director Adam Wingard and writer Simon Barrett, who previously collaborated on 2010's A Horrible Way to Die and are dialed into the current scene of young East Coast indie directors that also includes Ti West (The Innkeepers) and Swanberg. (In addition to acting here, he is responsible for the recent rom-com Drinking Buddies; Ti West also has a brief role in You're Next.) The filmmaking is efficient and accomplished. West's regular cinematographer Eliot Rockett brings an understated aesthetic to the lighting, bordering nicely between the au-naturale low-budget look of his peers' digital photography and something more reminiscent of gritty 1970s realism. About the only stumble in terms of execution is Jeff Grace's music. The Meek's Cutoff-composer slips into kitsch near the climax, using cheesy synthesizers for an anachronistic sounds that calls way too much attention to itself.

Otherwise You're Next is just fine, if maybe lacking in suspense. Wingard generates good tension in individual moments, but he fails to create a consistent tone of dread the way a similar, better movie like The Strangers does. As an audience member, I never found myself feeling the weight of a greater threat, not even when Barrret's script revealed its thin plot justifications. It's not even whether or not I cared if anyone lived or died, I was never that worried if they would. You're Next could have stopped at any point and it wouldn't have made a difference to me.

That said, it is worth sticking through the whole thing. The climax moves into some dark comic territory, and the action is very good. Vincent makes for a more than capable heroine, and the violence ends on a satisfying note worthy of Sam Raimi. 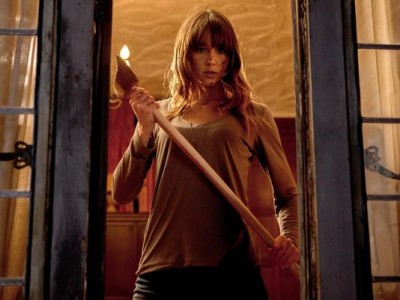