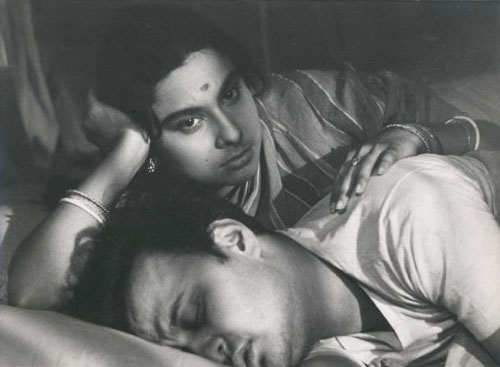 Satyajit Ray's 1963 film The Big City, a.k.a. Mahangar, is another fascinating outing from India's great multi-hyphenate of cinema (he directed, wrote the screenplay, and composed the musical score). The sensitively filmed domestic drama details the slow-burning resentment that develops in a struggling lower-middle class family, after the wife takes a job and enjoys it - a window on the changing role of women in 1960s India. Criterion's astonishing Blu Ray edition is a good companion to Ray's The Music Room (1958), his evocative portrait of a 19th century feudal lord who is similarly alienated by India's changing values (like the husband and father-in-law in this movie).

The Big City centers around the Mazumders, a mixed-generation family living in a tiny apartment nestled in one of Calcutta's more densely-packed areas. The dad in the family, Subrata (Anil Chatterjee), is having a hard time managing the household on the small income his banking job brings in. Not only does he have to support his wife and son, the meager finances also need to provide for his parents and his young sister Bani (Jaya Bhaduri), who is enrolled in an expensive private school. Subrata's wife, Arati (Madhabi Murherjee), brings up the idea of her finding a job to help out, an action that Anil initially supports. Despite her limited education, she ends up being employed by a knitting machine manufacturer in the city, a modern company that uses women as door-to-door saleswomen to ply their products to customers in the wealthy suburbs. Arati finds herself liberated by the work, performing well enough to get high marks from her boss, Mr. Mukherjee (Haradhan Bannerjee). Befriending her Westernized co-worker, Edith (Vicky Redwood), Arati picks up traits previously forbidden to proper Bengali women, such as wearing lipstick. While Arati's happily employed status is an inconvenience to Subrata, it's mortifying to Subrata's aging father (Haren Chatterjee), a retired professor of medicine who cannot abide the idea of a respectable working woman. Eventually, Arati's self-confidence alienates her emasculated husband Subrata, who cautions her that "peace within the family is more important than money." Subrata and Arati need to put aside their differences, however, when the family finds itself involved in a new crisis.

As with a lot of Satyajit Ray's films, The Big City's simple premise is belied by its exquisite storytelling and thoughtful craftsmanship. Arati's transformation from meek housewife to self-sufficient modern woman is subtly and beautifully realized, gracefully played out by the fascinating performance of actress Madhabi Murherjee. Ray doesn't come down hard and fast on either side of the modernization debate, however, resulting in characters that are given a thoroughly human, realistic dimensionality. Anil Chatterjee's nuanced job as the father in the family makes his concerns seem valid without coming off as chauvinistic, while Haren Chatterjee brings a lot of poignancy to his portrayal of Arati's father-in-law. While very much of its time and place, the situations the characters find themselves in has a strange relevancy in today's recession-ravaged America, where the traditionally "male" jobs in construction and manufacturing have been decimated while the "female" fields of health care and education are thriving.

Besides the story and characters, there's a lot of other nuances to The Big City to enjoy. I loved how the film literally brightens up after Arati and her co-workers go out on their sales calls, moving from the dingy, cramped (but beautifully photographed) family apartment to the open suburbs flooded with daylight. There's also a lot of engrossing interplay between the Anglo-Indian Edith and the other characters, who are both fascinated and appalled by the woman's modern clothing, casual attitude, crude language and smoking. It exposes an aspect of Indian society that most Western viewers previously had no inkling of.

While it has a few minor flaws (the drama is extended too long, and the ending seems slightly too simplistic), The Big City is one of Satyajit Ray's key works, a worthwhile watch for anyone with an interest in great International cinema. 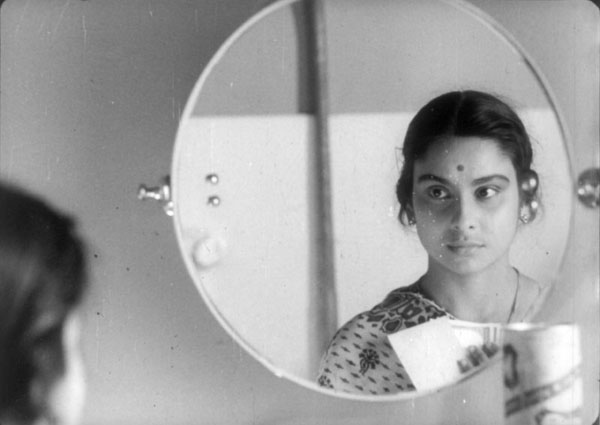 Surprisingly for an Indian domestic drama mostly played out on small sets, The Big City's cinematography is gorgeous - and the digital remastering used on Criterion's edition truly brings out the warmth in the 35mm source print. The black and white 1.33:1 image shows a minimum of aging, with many scenes having a beautiful tonality that you could just dive into. Although the notes in the blu ray booklet say that some of the restoration was sourced from a secondary, inferior print, the film is given a remarkably consistent polish throughout.

The restored monoaural soundtrack is considerably less showy than the picture, but it's a fine job as well with clearly recorded, pleasant dialogue and little distortion (there's some raggedness present in the rare music-backed scenes). Considering that most vintage Indian films don't use the best recording methods, they did a sweet sounding job here. An optional subtitle track, newly translated in English, is also included.

Criterion has loaded this disc with worthwhile bonus content that puts the film in context. Many of it is produced exclusively for this edition:

Humane contemporary drama from the great Indian director Satyajit Ray, The Big City is a low-key stunner that depicts the triumphs and heartbreak of an average Bengali family after the wife decides to work outside the home. The fact that Criterion's presentation is exemplary in just about every respect makes this one a logical addition to the DVD Talk Collectors Series.