It's not too often that a DVD release comes about as the result of a miraculous discovery; Lost and Found: American Treasures from the New Zealand Film Archive qualifies.

The newsworthy 2010 story of preservationists locating a huge stash of fragile silent film nitrate prints, hidden away for decades in New Zealand, served as the impetus for this DVD. In addition to previously lost works from John Ford, Alfred Hitchcock and Mabel Normand, the unearthed reels included a wealth of forgotten documentary shorts, newsreels, cartoons and other ephemeral stuff. To most of the world it was a pleasant surprise - why New Zealand, of all places? The answer was a matter of practicality. In the silent era, the county was often the last stop for well-traveled films in their distribution journey. After their runs ended, theaters were normally supposed to return the films to the studios who made them. Many wound up being simply forgotten and stored away, however - much to the delight of film collectors and preservationists.

The single-disc Lost and Found: American Treasures from the New Zealand Film Archive presents a sampling of the 176 films uncovered in that cache. The project is another beautifully curated project made under the ageis of the National Film Preservation Foundation. While their previous release - the essential Treasures 5: The West 1898-1938 - also included a couple of the New Zealand films that fit within its American West theme, this set runs stylistically and thematically all over the place (which makes it more fun, in my opinion). Apparently those 1920s-era New Zealanders loved the variety of American cinema as much as any other country.

Running about three and a half hours total, the films included here run the gamut from animated cartoon and newsreels to slapstick comedy, torrid dramas and advertising (represented by a fascinating short demonstrating how hats are made). Lost and Found: American Treasures from the New Zealand Film Archive consists of the following thirteen films:

Lyman H. Howe's Famous Ride on a Runaway Train (1921; 6 minutes)
This simple (yet still potent) thrill film takes viewers on a front-mounted train trip gone awry as the engine speeds out of control, punctuated with sped-up footage, sound effects and brisk music. With a deft combo of documentary footage and a showman's flair, one can see why producer Lyman Howe enjoyed great success with this intense little joyride.

Happy-Go-Luckies (1923; 7 minutes)
In this rudimentary but highly enjoyable early animation from the prolific Paul Terry, a mischievous pair of banjo-strumming hobos (a dog and a Felix-like cat) con their way into a dog show and take off with the prize money. Not much in the way of story or character development, but there's some fun to be had in the wacky gags and some surprisingly elaborate (for its time) animation. Based on this flick, one can why the young Walt Disney aspired to be as good as Terry. 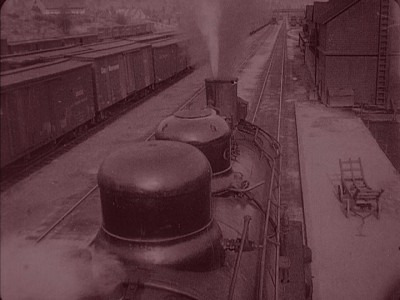 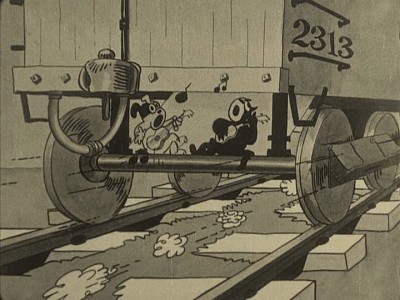 Strong Boy (Preview) (1929; 42 seconds)
A tantalizing peek at a lost action-comedy which John Ford directed for the Fox Film Corporation. Ford standby Victor McLaglen plays a burly railroad baggage handler who attempts to win the heart of a lovely lass (his boss's daughter) through staged acts of derring-do. It's a shame that the feature is lost, since it appears to have some snappy action scenes and nice photography.

Upstream (1927; 60 minutes)
One of the most significant finds in New Zealand is this backstage comedy, an unexpected vehicle for John Ford at Fox. A ramshackle boarding house filled with a variety of mostly down-and-out vaudeville performers forms the setting for a story that, despite the colorful array of characters, mostly settles on the all-familiar love triangle. This one involves conceited actor Eric Brashingham (Earl Fox) who travels off to London and becomes a huge success playing Hamlet. He abruptly leaves behind Gertie (Nancy Walsh), the performer who loved him, and breaks up the act they shared with knife thrower Jack (Grant Withers). Jack comforts the wounded and vulnerable Gertie, and the show must go on. While the story fails to impress, Ford does an impressive job here of conveying the theatrical atmosphere and giving vivid presence to even the slightest of ancillary characters. It's also interesting to note the apparent influence of F. W. Murnau (who was also directing for Fox at the time) with his use of chiaroscuro lighting and forced perspective. 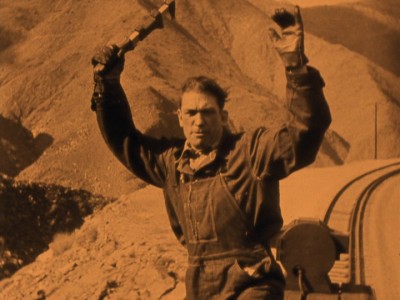 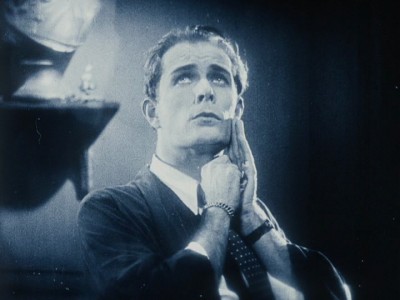 Birth of a Hat: The Art and Mystery of Making Fur Felt Hats (1921; 14 minutes)
Produced by Stetson as a sponsored film (which theaters could show for free), Birth of a Hat's absorbing historic content betrays its humble origins as a piece to shill product. It's How It's Made, 1910s style, as the labor-intensive process of hat making is outlined every step of the way, from beaver and rabbit pelts to finished chapeau. Much of the film was shot in the bustling, gender-segregated Stetson factory (although the film was printed around 1920, the footage itself is believed to be of World War I vintage). Cool!

The Love Charm (1928; 10 minutes)
A pastoral trip to the islands, The Love Charm uses stunningly gorgeous early two-strip Technicolor to prop up a paper-thin story of a blue blooded sea captain falling for a beautiful native girl. Produced by the short-lived Colorart Pictures, the film's nearly pristine photography has weathered the decades better than many of the other films on this set. Bonus trivia: The Love Charm was written by Duncan Renaldo, the actor who later played The Cisco Kid on film and television. 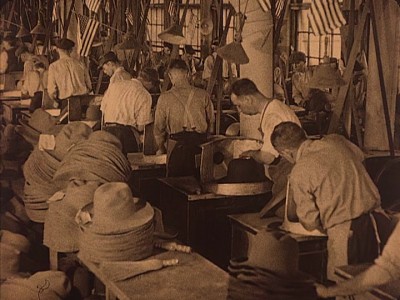 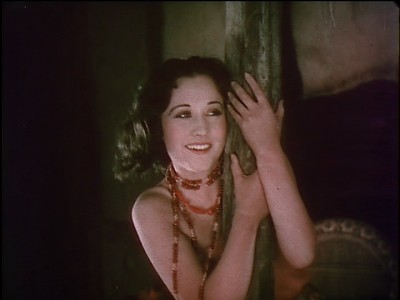 Won in a Cupboard (1914; 13 minutes)
A modestly produced short which veers uncomfortably from hearts-and-flowers romantic melodrama to all-out slapstick comedy, Won in a Cupboard is notable for being the earliest surviving film written and directed by silent comedienne Mabel Normand (and, incidentally, the earliest American film directed by a woman other than those by fellow film pioneers Lois Weber and Alice Guy Blaché). Normand was just 21 years old when she made this effort, in which she plays a country girl whose pursuit of the boy she's smitten with runs afoul with a scandalous incident: their parents are stuck in a closet. It's fairly typical stuff, although Normand does employ one clever shot with the lovers walking toward each other in split-screen, eventually uniting in the same frame. 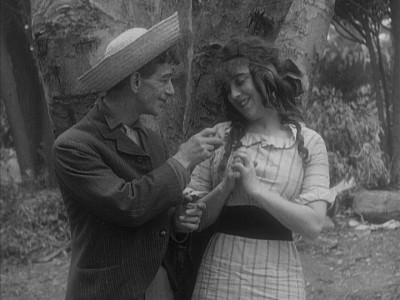 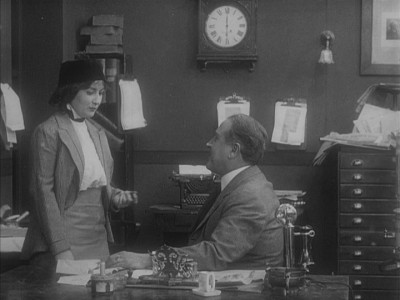 Stories from American Newsreels (1918-c.1921; 4 minutes)
Newsreels count among the rarest of silent-era preserved films, which makes these brief vignettes from two separate newsreel purveyors all the more precious. The first segment shows a couple of World War I homefront efforts with a group of Chicago high school girls being taught traditionally male working skills, along with a Red Cross fundraising drive. The second, more lighthearted newsreel comes from Selznick Pictures Corp. In a pair of ripped-from-the-headlines segments, a woman operates an ostrich-powered cart and a man demonstrates his ridiculous (or ahead-of-their-time) inventions - a prototype mobile phone and a radio-controlled automobile.

Andy's Stump Speech (1924; 22 minutes)
Bald, chinless comic Joe Murphy stars in this sweet and lively short, one of a handful that were based on the popular newspaper comic strip The Gumps. Murphy supplies the slapstick chops and offbeat looks to play Andy Gump, a clueless yokel who nevertheless decides that he, too, can run for president (this was done in an election year, remember). In his bid for office, Andy winds up tussling with a swarm of bees and delivering his important stump speech near some unfortunately placed dynamite. Smoothly directed by Norman Taurog (who'd go on to oversee several Jerry Lewis and Elvis Presley vehicles), the energetic pacing makes for quite the contrast over the staid Won in a Cupboard from a decade earlier. 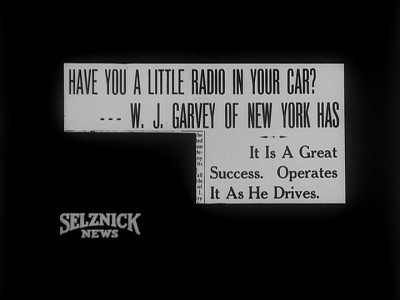 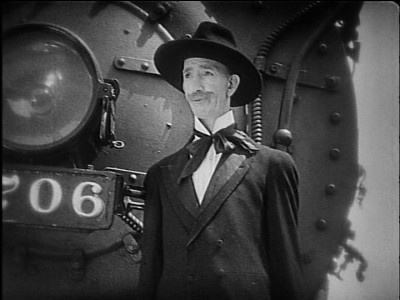 Virginian Types: Blue Ridge Mountaineers (c.1926; 2 minutes)
Though brief, Virginian Types serves as a fantastic time capsule of rural life in 1920s America. What's more, these short vignettes were captured on beautifully hand-colored film. Although frame-by-frame tinting techniques have been used since the beginning of film, this particular short uses a color process that's been refined through the use of cut-out stencils. It's mesmerizing to watch.

The White Shadow (1924; 42 minutes)
Torrid melodrama The White Shadow was another important find in the New Zealand collection, being an early entry in the filmography of Alfred Hitchcock (he co-directed with Graham Cutts and wrote the scenario). The British production was an excellent vehicle for American silent screen star Betty Compson, who plays a pair of identical twin sisters who get romantically involved with the same man. While the wild and impetuous sister Nancy goes off to Paris to become a gambling playgirl, reserved Georgina stays behind in England to care for their parents. In order to protect her sister's image, Georgina also impersonates Nancy for the sister's one-time love, Robin (Clive Brook). It all goes well, until Robin winds up finding the real Nancy in the jazz club where she works. Sure, it's a standard tale (the New Zealand print is missing the final reels), but film buffs will enjoy spotting Hitchcock's contributions. His hand is especially evident in the atmospheric scenes at the nightclub, a seedy venue called The Cat Who Laughs Café. 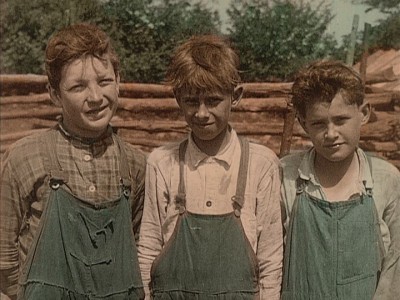 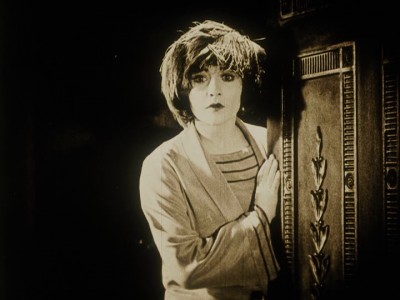 The films here are nicely preserved by labs located in New Zealand and the United States. The full frame image has been given a thorough digital touch-up, although it's important to note that the main idea here is preservation and not restoration. The films have a lot of clarity, despite showing varying signs of age. There are a few instances where the nitrate corrosion in the decomposing print blots out some or most of the picture, but by and large these are lovely looking films given a fine mastering.

Nearly all of these films are underscored with newly composed tracks by Donald Sosin and Michael D. Mortilla, recorded in pleasant and crystalline sounding stereo. The one exception is Lyman H. Howe's Famous Ride on a Runaway Train. That film is accompanied by its own vintage soundtrack disc, long preserved by the Library of Congress and finally reunited with the imagery that it was originally made for.

Lost & Found: American Treasures from the New Zealand Film Archives lacks the audio commentaries from previous Treasures sets, but it's still a thoughtfully done package that delivers a lot of bang for the buck. Each film is accompanied with a text-only essay from historian Scott Simmon giving comprehensive background info on the films and their preservation. They're also included in the nice accompanying 48-page booklet, which contains pieces by Leonard Maltin and other silent film experts. The only other extra is a music video which looks in on the scoring sessions for Upstream (this one is in 16x9 aspect ratio).

Think of it as a mini treasure chest, full of ephemeral silent films. Lost and Found: American Treasures from the New Zealand Film Archive assembles three and a half hours' worth of beautifully preserved feature films, short subjects and other obscurities dating from 1914 to 1929. This set represents just a fragment of the previously lost films recently unearthed in New Zealand, making the mind reel as to the possibility of further releases. More, please. Highly Recommended.