American Hippie In Israel, An

How did I not know of this movie's existence until now? An American Hippie in Israel, first released in 1972 (and yes, it appears to have gotten that title long before 1981's An American Werewolf in London, although in its native Israel it was titled The Hitchhiker) is a true cinematic oddity. I actually suggest watching it without knowing much about what is going to happen, but I'll give you a brief description anyways in case you want to have a better idea of the movie before you decide to give it any of your time: 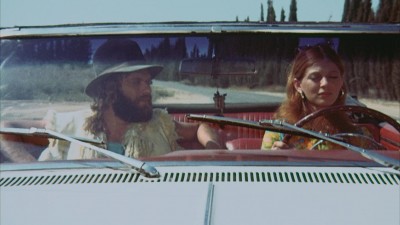 The title hippie is Mike (Asher Tzarfati), an American who had served in the Vietnam war but is now spending some time just "bumming around" the world, only problem being that he's been running into two mysterious silent gun-toting men, wearing black suits and top hats with their faces covered in silver makeup, throughout his travels so far. He lands in Tel Aviv, and walks out of the airport to hitch a ride. He's picked up by Elizabeth (Lily Avidan) who asks him plainly "Are you a hippie?" to which he replies "You might say so- right on." They soon run into the two men on the road, causing Mike to get out of the car and ask them why they turn up everyplace he goes and what it is they want from him, to which they remain silent. He and Lily carry on until they reach her home, and she invites him in where they quickly hook up. Mike tells her that his time in Vietnam turned him "into a murdering machine" and his dream now is to find a place "far away from everything, where I can live with a bunch of people who think like me, without anyone telling us what to do." Lily says she "digs what he means" and wants to join him in making that dream a reality. They then go into town and through a musical montage gather up a bunch of like-minded people (hippies, in other words) and they all parade to an abandoned warehouse where they have a bit of a love-fest with folk singing and all that.

Mike announces to everyone his plan to live "an absolute free life in an absolutely isolated place, away from this civilization and culture of violence- without clothes, without government and without orders." One hippie says he knows of a small island a few kilometers away that would be perfect, so everyone cheers and is set on heading over there. However, due to a surprise event, only Mike and Lily along with one other couple (played by Shmuel Wolf and Tzila Karney) end up making the trip. They set up camp on the island, consisting of not much more than rocks and the remains of a centuries-old building, where they have a good time the first night but things then start to go wrong and turn into what Mike calls "a really bad scene". 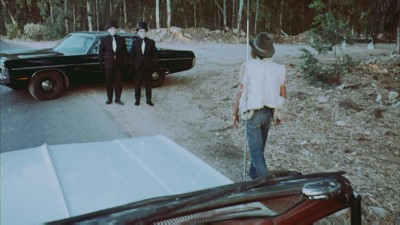 Suffice it to say this is a strange and unintentionally hilarious movie. There are many laughs, from the hippie culture stereotypes to the outlandish situations the characters find themselves in, and all the while you're wondering just who are those two guys following Mike around? Much of the dialogue is ridiculous and sounds obviously post-dubbed (the American Mike is played by an Israeli actor and may have been dubbed with an American actor's voice), just a little out of sync from those speaking onscreen, and there are many obvious post-production sound effects as well. Many reflections and shadows of camera equipment are visible, the sort of thing I always watch for. Shortly after Mike arrives at Elizabeth's house, he goes into a tirade about his war experience and repeatedly refers to the authorities as "pushing buttons" to make people do what they want, which you just can't help laughing at. There's also a very memorable dream sequence shot in slow motion with complete silence, and an absolutely insane moment where Mike and the other man, who speaks only Hebrew, are on the island discussing the problems they've run into. After listening to him in Hebrew, Mike keeps replying "I can't understand a word you're saying- I don't get you, man!" This goes on for several minutes back and forth.

However, An American Hippie in Israel falls just a bit short of bad-movie greatness- it certainly doesn't live up to the front cover's claim of being "the most psychedelic movie ever made," as it can't top the likes of Barbarella, Pufnstuf or The Stewardesses to name just a few more memorable films from that era. The music score is rather limited, with only two original songs and a main theme that is repeated throughout the movie too many times, and in the end not a whole lot really happens here. Mike's non-violent principles certainly go out the window by the time the movie is over. The movie apparently did not get a very wide release and has remained rather obscure until Grindhouse Releasing got a hold of it, holding theatrical screenings in some American cities. In its native Israel it has become a midnight movie favorite as well, as we see in the disc's extras. 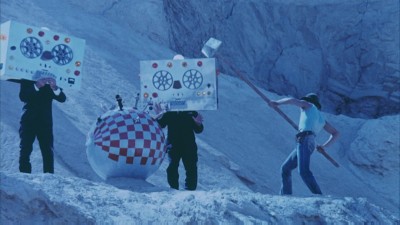 The full 16x9-ratio transfer is remarkably clean considering what an obscure film this is- there is very little dirt or scratches although I noticed a few tell-tale signs of film rolled too tight at the end of reels. Film grain has been left alone and I did not see any compression artifacts.

A standard DVD of the movie is also included, parts of that I sampled also looked very good although the Blu-Ray picture was certainly sharper.

The Blu-Ray disc's audio is in 1-channel DTS-HD Master Audio and is also very clean for a movie of this type. There is little to no background noise and all of the technical imperfections of the original recording shine right through. The audio on the standard DVD is in 2-channel Dolby Digital "big fat mono." Both discs also include optional Hebrew subtitles. 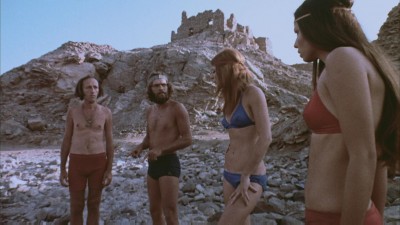 The extras included here are rather extensive. The main extra is a separate standard DVD with a complete presentation of The Hitchhiker as it was released in Israel. The differences for the most part are rather slight, except perhaps the extra couple seconds at the very end that were cut from the American version. The scenes with the most differences are also included on the other discs as "deleted scenes," but for completeness' sake it's still good to have this version included. This transfer is in 4x3 and the disc warns us that the print isn't in the greatest shape. French and Hebrew subtitles are burned into the print, with a LOT of scratches and splices and a muddier sound track. One could argue that the movie looks and sounds better this way. Oddly this disc gives you a choice of audio in 2-channel Dolby Digital mono or 1-channel DTS.

With the Blu-Ray and DVD movie, an alternate audio track is included recorded during a screening at the Beverly Cinema in Los Angeles. Although it's indicated as 5.1, only the front left and right channels appear to be used. You get to hear the movie echo from the theater's apparently less-than-perfect acoustics, along with audience laughter and random comments. It was interesting to compare the moments that got the biggest reaction from the audience to those I had laughed at most myself. Then there's some cast screen tests in black and white with no sound (along with some compression artifacts), a lengthy 50-minute piece (in high definition) where actors Asher Tzarfati and Shmuel Wolf are interviewed recently at home, more hi-def interview footage with Susan Devore (one of the folk singers) and assistant production manager Moshe Berman, an early short film from director Amos Sefer called "Be Careful Children, the Ball is Not Just Yours" (which is in pretty rough shape), and "A Cult is Born", showing how The Hitchhiker has become a cult phenomenon through midnight showings at the Tel Aviv Cinematheque, with patrons doing Rocky Horror-esque performances in front of the screen and generally making fun of it. An Israeli TV news piece on this is also included (in standard-definition with optional English subtitles), a still gallery of production photos, posters, ads and newspaper articles, and a video-based trailer for the movie's recent re-release that gives away many surprises. There are also text biographies and filmographies for director Amos Sefer and star Asher Tzarfati, who has been in a few other movies you might recognize.

There are a couple Easter Eggs too- on the main menu, hit the Up button until the word "Hippie" in the movie title is highlighted and you'll get an old clip of George Jessel, as he was one of the financiers of this movie's initial American release and his name actually appears at the movie's beginning. A more substantial hidden feature is a 15-minute episode of the Norwegian internet show "Filmjunkiene", with Aleksander Serigstad and Ivar Fallet where they analyze and further ridicule the movie. This can be found by first going to the second page of the extras menu, highlighting "Back" and hitting the Up button. They speak Norwegian, and the disc has had English subtitles added while there were none on their YouTube upload.

Both discs also have a rather eclectic selection of trailers. In high-definition on the Blu-Ray, we get the theatrical trailers for Corruption, The Swimmer, The Big Gundown and Massacre Mafia Style, all of which look great- I'd certainly like to see more hi-def transfers of older trailers. There's also a hi-def video-based trailer for Gone With The Pope. In standard-definition 16x9 is a teaser for Pieces and a trailer for Death Game, and not-so-great looking trailers in 4x3 standard-def for I Drink Your Blood, Scum of the Earth and a video-based trailer for Cat in the Brain. Exclusive to the Blu-Ray disc are both the original and reissue trailers for Cannibal Holocaust in high definition, along with 16x9 standard-def trailers of Family Enforcer and Love In Cold Blood, and 4x3 letterboxed trailers of The Beyond, Cannibal Ferox and The Tough Ones. Hidden in Asher Tzarfati's filmography, there is also a trailer for Eagles Attack at Dawn. 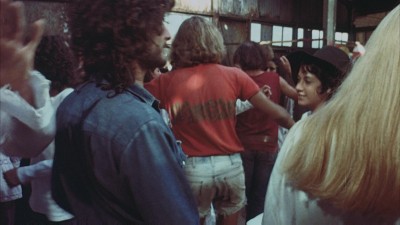 It's certainly a miracle that An American Hippie in Israel received the Blu-Ray treatment and looks as good as it does here. This release was certainly a labor of love for those involved with it. As an aficionado of bad and/or weird movies myself, I found this a bit of a disappointment as it really didn't have a whole lot going on- a better music score or just a bit more out-and-out weirdness would have been enough for me to think a lot higher of it. Overall though it's still a must-see for anyone who appreciates truly strange movies or hippie-era artifacts.