Many Adventures of Winnie the Pooh, The

Walt Disney Studios Home Entertainment // G // August 27, 2013 // Region 0
List Price: $36.99 [Buy now and save at Amazon]
Review by Stuart Galbraith IV | posted September 20, 2013 | E-mail the Author
The Blu-ray cover art touts The Many Adventures of Winnie the Pooh as "The Original Classic," an ironic proclamation considering that this 1977 animated feature is actually a compilation of three earlier featurettes with original bridging material and a new ending. Winnie the Pooh and the Honey Tree (1966, originally shown with The Ugly Dachshund) came first, followed by Winnie the Pooh and the Blustery Day (1968, preceding The Horse in the Gray Flannel Suit) and, finally, Winnie the Pooh and Tigger Too (1974, opening for The Island at the Top of the World). Walt Disney conceived a Pooh feature film in the early 1960s but midstream opted for a series of two-reel featurettes instead, supposedly with the idea of eventually combining them into the resultant feature, though Disney himself died not long after the release of the first short and during production of the second. Hard as it is to imagine today, back in the 1960s A.A. Milne's stories were largely unknown in America (though famous in Britain) and Disney felt introducing the characters slowly the better marketing strategy, and time certainly proved him right.

Despite some repetitiveness and unavoidably episodic pacing, The Many Adventures of Winnie the Pooh is utterly charming. The adaptations eschew the Disney house style for the most part, as the film is gentler, less broadly comic, and more whimsical. Milne purists tend to dislike the Disney version, but the results are a pleasing compromise, falling about halfway between Milne and Disney, and the studio's changes in terms of design and characterization are, for the most part, reasonable and respectful to Milne's intentions.

It's a movie that can be enjoyed by children and adults alike, but the reasons for and their reactions to what's onscreen are, by design, likely to differ. Children enjoy the simple but droll stories of the Hundred Acre Woods, while for adults it taps into memories and strong emotions of imaginary childhood companions in ways that were unique until Pixar's later Toy Story movies came along.

Disney's Blu-ray is generally good. The video transfer goes a bit overboard in terms of DNR but less obviously so than the unnaturally scrubbed The Sword and the Stone, which I watched a week or so earlier. Grain is zapped away but the delicateness of the ink and watercolor backgrounds remains intact. Barely mentioned on the packaging is the inclusion of Winnie the Pooh and a Day for Eeyore (1983, when it accompanied a reissue of Sword in the Stone in fact). This significant extra is also presented in high-def, albeit in 1.37:1 format. It obviously did not undergo the same DNR work as Many Adventures and, while undeniably more film-like in some respects, it's less pleasing overall. Other supplements run the gamut from inane to terrific. 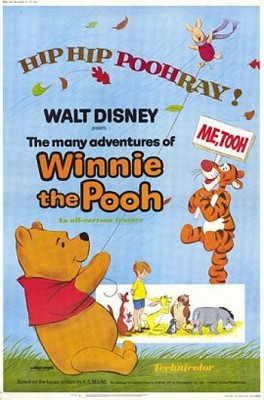 In "Winnie the Pooh and the Honey Tree," Pooh (Sterling Holloway) plots to steal honey from the bees by disguising himself as a little black rain cloud and riding a blue balloon provided by Christopher Robin, and later he becomes stuck in the front doorway of Rabbit's (Junius Matthews) house after an overindulgent lunch there. In "Winnie the Pooh and the Blustery Day," the animals of the Hundred Acre Wood contend with a fierce windstorm and flood that destroys Owl's (Hal Smith) treetop home, while Pooh first encounters the eccentric but exuberant Tigger (Paul Winchell). In "Winnie the Pooh and Tigger Too," Rabbit gets fed up with Tigger's bounciness and plots, sort of, with Pooh and Piglet (John Feidler) to abandon Tigger in the forest, except that everyone but Tigger winds up getting lost.

I watched The Many Adventures of Winnie the Pooh with my six-year-old daughter, who was completely enchanted with what she saw, laughing and giggling all the way through the picture, while I, despite having seen the picture multiple times through the years, including during its initial theatrical release, found it charming in other ways.

Disney wisely chose to present Pooh's world more or less as Milne did, as stories springing out of the pages of Milne's books, and narrated by English character actor Sebastian Cabot. The animals are introduced in a live-action prologue, as stuffed animals in Christopher Robin's bedroom, and their animated counterparts frequently interact with the pages of the book themselves, walking and bouncing off letters, which blow or are washed away during the blustery day and subsequent flood. The animals remain stuffed creatures even in cartoon form, the threading on Pooh's back becoming torn as Pooh exercises, while Christopher Robin and others replace Eeyore's tacked-on tail.

Most of all I was taken aback by the ending, added specifically for The Many Adventures release, in which Christopher Robin more or less says goodbye to Pooh and the others, acknowledging that he's starting school and that he'll no longer have the time to play with them as they once did. The significance of this went largely unnoticed by my daughter while I unsuccessfully suppressed a big lump in my throat. I can't recall any other films tapping into these emotions in quite the same way before this, and none after until the later Toy Story movies, especially the famously gut-wrenching coda to Toy Story 3. It's subtler and less protracted here, but in some ways equally emotional.

The (mostly) consistent voice cast and animation artists on the three original featurettes and new bridging material give the film a pretty seamless quality, despite having been made over something like a 15-year period, when one includes the early development phase. Winnie the Pooh and a Day for Eeyore suffers considerably because it was made mostly by other hands, even though it was made soon after Many Adventures' release. Interestingly, Piglet is absent from the first segment, his character more or less replaced by a gopher (Howard Morris) with a whistling speech impediment. "I'm not in the book but I'm at your service!" he says, an in-joke acknowledging his infidelity to Milne.

While Holloway, Cabot, Winchell, et. al provide the same voices in all three featurettes, each original short featured a different child actor providing the voice of Christopher Robin. The IMDb contradicts itself, claiming all three voices - Bruce Reitherman (one of director Wolfgang Reitherman's sons), Jon Walmsley, and Timothy Turner - are retained for the soundtrack of The Many Adventures of Winnie the Pooh, while elsewhere it states Turner re-recorded Christopher Robin's voice throughout (and, presumably, the new material) to maintain consistency, but the movie credits all three boys. Moreover, in the making-of documentary included as an extra, British-born Walmsley (The Waltons) seems to be claiming that he, not Turner, provided the voice for Christopher Robin for the newly-added coda.

The Many Adventures of Winnie the Pooh is bright and sunny, impressively sharp with strong color if a complete absence of film grain, Disney Home Video apparently opting for a brand-new sheen to the transfer over a more filmic restoration. But as the film clips featured in the 2001 standard-def making-of documentary illustrate, the Blu-ray is still light years ahead of all previous releases and I certainly have no major complaints. The disc is region-free and presented in 1.66:1 widescreen instead of Disney usual 1.75:1 format, possibly a compromise ratio taking the older featurette's compositions into consideration. The 5.1 DTS-HD Master Audio mix is excellent, and French and Spanish 5.1 mixes are available, along with subtitle options in all four languages.

New bonus material includes a rather pointless "Pooh Play-Along," a two-minute selection of clips encouraging children to touch their toes, bounce like Tigger, and play the drums like Christopher Robin. Better are five "Mini Adventures of Winnie the Pooh," HD shorts running several minutes apiece that were also included, I believe, on Winnie the Pooh. The aforementioned Winnie the Pooh and a Day for Eeyore is in high-def if 1.37:1 standard size, and while very disappointing as a film its inclusion is most welcome (though I wish it had been included on The Sword in the Stone instead). Carly Simon sings "The Winnie the Pooh Theme Song" in a music video, while "The Story Behind the Classic" is a detailed, mostly excellent history of the series produced in 2001, with key talent since passed interviewed about their participation in the films.

Not exactly the original classic but a classic nonetheless, The Many Adventures of Winnie the Pooh is a funny, charming, even lovely animated film for children of all ages and Highly Recommended.