Just when I thought the Da Vinci well had been bled dry, Starz does what should have been the obvious, next step and put their now semi-notable historical-fiction brand on it, in the form of "Da Vinci's Demons" an 8-episode premiere season from the mind of David Goyer. To the unsuspecting viewer, the marketing angle is deceptive, borrowing solely on Goyer's work with Christopher Nolan on The Dark Knight trilogy; now while Goyer is also the mind behind such notable works as "Dark City" and the first two "Blade" films, his writing credits also include such rotten celluloid as "Jumper," "Ghost Rider: Spirit of Vengeance" and "Blade Trinity," the latter of which he also directed. Fortunately, the Goyer more associated with Nolan seems to be the mind behind "Da Vinci's Demon's," for the most part, with the debut season offering a decidedly loose nugget of pseudo-history. 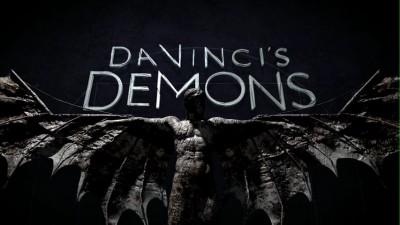 The primary strength of "Da Vinci's Demons" from a narrative standpoint, is by wisely only giving it eight episodes to reel viewers in and leave them anticipating a second season, what doesn't work so well from episode-to-episode is never allowed to build to the all too familiar crescendo of a lavishly produced series crumbling under its own weight. Fortunately, unlike Starz' most famed piece of historical-fiction, "Spartacus," "Da Vinci's Demons" manages to, at the usage of a terrible pun, exorcise its demons midway through the second episode, allowing the remaining five and a half to thoroughly entertain and at times, fully captivate. The premise of the series is quite simple, a very young Leonardo da Vinci (Tom Riley), initially presented as an opium-smoking, lightning-minded, lothario, unable to keep desire at bay, manages to find himself woven into the court of the Medici's, led by a stalwart and overly stressed Lorenzo (Elliot Cowan), fighting to save beloved Florence from the machinations of Pope Sixtus IV and his sadistic, cunning henchmen, turned mastermind Girolamo Riario (Blake Rittson). At the center of it all is Lucrezia Donati (Laura Haddock), object of Leonardo's affection, mistress to Lorenzo de' Medici and holding a mysterious connection to Rome itself.

The minor brilliance of "Da Vinci's Demons" is the way the overall conflict of Rome and Florence manages to conveniently weave itself into the journey of Leonardo to find his true place in the world, without every feeling overly contrived. Those with a passing knowledge of Leonardo's work will grin at the way his war machines are naturally woven into the story-arcs and how for every pseudo-historical piece of icing offered, the real source of intrigue comes from Leonardo's quest to find the Book of Leaves, which more importantly may hold a key to a muddled vision from his youth and answer the question of why the only face he can't recall is that of his departed mother. Along the way come a healthy cast of mysterious and colorful characters, leading the science-minded Leonardo to the path of faith, culminating in some remarkable breakthroughs. However, as strong as Leonardo's personal journey is, the show does risk coming off the rails with the emphasis on Leonardo's mother, leaving me to personally believe the ultimate reveal will be her face as the inspiration for the Mona Lisa; if so, then a good portion of Leonardo's arc will be unfulfilling in hindsight. 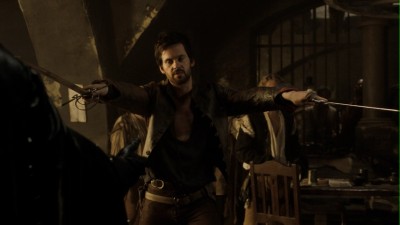 The production value (I'd be remiss if I didn't mention the score of Bear McCreary, which easily earns the series a half-point of merit on its own) of "Da Vinci's Demons" are enough to hold one's interest through the premiere episode with clever visual effects tricks adding a unique flair to the series; case in point; the sequence in which Leonardo sketches birds in flight finding itself slowed-down at points to quickly overlay animations of the actual historical sketches. It's most definitely a gimmick, but one that works because it's never overused and never used without purpose. Supporting the strong production design is an incredibly solid cast, who makes the sometimes-overwrought dialogue and plots feel believable, even if it remains larger than life. Riley as Leonardo gets to run the gamut of emotions and in particular, his work in the season's fifth episode is particularly impressive, when we find Leonardo imprisoned on charges of sodomy, his mind seemingly slipping away from him as solitary confinement continues day after day. Blake Rittson however, could dial down the villainy, especially when placed next to co-conspirators, who all need a solid mustache to twirl; a level of subtlety would do wonders for a series that often depends on a shocking turn to keep things moving forward.

"Da Vinci's Demons" is definitely nothing of historical value, merely trading on facts as the backbone to attach a healthy dose of mystery (at times, this interpretation of Leonardo could easily be compared to a more subdued version of Robert Downey Jr's work as Sherlock Holmes) and political intrigue to. Apart from the mysteries directly written to keep us thinking until future seasons, nothing really sticks in the brain, especially the half-hearted attempt at romance permeating the season, once an episode is over; the writing is catchy, but there's little to no subtext to anything. "Da Vinci's Demons" is a very successful offering of adult-themed historical drama and adventure and should leave anyone who chooses to give its eight-episode debut a shot, immediately wanting a second season. 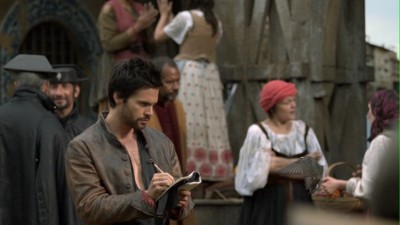 
The 1.78:1 anamorphic widescreen transfer features a consistent, rich color palette evoking the desired sense of historical authenticity. Detail is at minimum above average, with very little digital noise/grain obscuring the frame. Contrast levels are equally consistent and natural, holding up most notably in the many darkly lit sequences of the series. All in all, the transfer is what one expects from a Starz series these days.


The Dolby Digital English 5.1 audio track is immersive and perfectly balanced, with surrounds getting ample workout both on the dramatic effects front as well as more artistic uses of score and surreal sound work. A Spanish mono track is included as well as English SDH and Spanish subtitles are included.


The meatiest extras consist of commentaries on select episodes by David S. Goyer and select members of the cast. The remaining extras on the set's third disc include "Mastering Da Vinci" a look at the score of the series, "Constructing Da Vinci" and "Dressing Da Vinci" both focused on production aspects, "Worldwide Fanfare" a brief bit on promo events, a handful of Deleted Scenes and a promo for the second screen app, which for those with mobile devices promises additional extras.

I hesitate to call the first season of "Da Vinci's Demons" stupid, but it definitely walks that fine line between of general drama and pseudo-intellectualism. As stated before the cast and the production design to wonders to sell a very basic plot structure, spanning eight well-paced episodes. Few series' have offered a finale that instantly leaves me wanting resolution as this one, although in spite of a continuing mystery, very little of the series stuck with me. Recommended.