Murder, She Wrote - The Complete Series

Universal // Unrated // October 1, 2013
List Price: $199.98 [Buy now and save at Amazon]
Review by Stuart Galbraith IV | posted November 5, 2013 | E-mail the Author
If CBS's prime-time line-up had become a dinosaur by the 1980s and ‘90s then Angela Lansbury was by all rights its Tyrannosaurus Rex. A Sunday night staple for most of its 12-season, 264-episode run, Murder, She Wrote drew 23 million viewers weekly during its peak years, spawning a spin-off (The Law & Harry McGraw) and innumerable imitators, including the long-running Diagnosis Murder (with Dick Van Dyke) and related shows such as The Father Dowling Mysteries, which starred Murder, She Wrote regular Tom Bosley. The series was a Top 15 show for eleven of its twelve years, and in the Top Ten for eight, peaking at #3 during its second season. Though she never won, Lansbury was nominated for a record 12 Emmy Awards as Outstanding Lead Actress in a drama series, one nomination for each year the show was on the air, and the series itself won two Golden Globes as Best TV Series in the drama category. 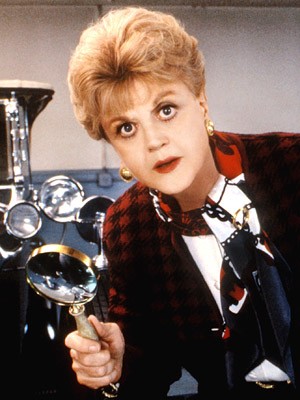 Eventually though, like The Beverly Hillbillies a quarter-century before, Murder, She Wrote's continuing ratings success was from a purely business standpoint a liability: the show was "skewing too old," attracting an audience of retirees with limited incomes, a demographic seen as undesirable compared to the 18-49-year-olds with deep pockets tuning in instead to rival NBC's "must-see TV" line-up that included Friends and Seinfeld. Like CBS's rural purge of 1969-72, the cancellation of still-popular shows like Hillbillies, Green Acres, and Mayberry R.F.D., Murder, She Wrote was eventually axed as well, though Lansbury returned to star in four made-for-television features airing between 1997 and 2003. Reportedly the now 88-year-old actress has expressed interested in starring in at least one more, final Murder, She Wrote telefilm and a reboot of the series with a new star has been announced.

I never watched Murder, She Wrote when it was new, though my parents, emblematic of the show's core audience, were loyal viewers. What little of the show I saw back then struck me as a very American television imitation of Agatha Christie's Miss Marple, and I preferred the real thing, namely the concurrent Agatha Christie's Miss Marple series (1984-92) starring the great Joan Hickson. Lansbury herself had played the famous elderly amateur sleuth in The Mirror Crack'd in 1980, and there were many other similarities, particularly Lansbury's effusive busybody interpretation of Jessica Fletcher, who like Miss Jane Marple lived quietly in a picturesque small town. More similarities: Neil Simon's murder mystery spoof, Murder By Death featured a Miss Marple character also named Jessica (Marbles), and the title of Lansbury's show recalled the Miss Marple movies of the 1960s that had starred the irreplaceable Margaret Rutherford, particularly the first, Murder, She Said (1961).

When Murder, She Wrote: The Complete Series was announced, I did a bit of preliminary research and discovered to my surprise that, if the show's creators, Richard Levinson and William Link, are to be believed, Murder, She Wrote wasn't inspired by Miss Marple at all, and that the series had other origins. Levinson and Link, the men behind the great Columbo TV movies starring Peter Falk that originally aired on the NBC Mystery Movie, claimed that Murder, She Wrote was really an attempt to retool Ellery Queen (1975-76), the highly regarded but commercially unsuccessful mystery series that had starred Jim Hutton. Although that series was about a man and set during the late 1940s, both Ellery Queen and Murder, She Wrote were about murder-mystery writers moonlighting as amateur sleuths, and both series are notable for their interesting ensembles of guest talent. As a big fan of both Columbo and Ellery Queen, Murder, She Wrote suddenly became more interesting.

Where Ellery Queen was hopelessly absent-minded, socially inept and irresponsible, his razor-sharp mind on display only when solving baffling murders, Jessica Fletcher is a grandmotherly widow (but physically active; she's seen jogging during the opening credits and often ran during the shows themselves). She's not the amusing eccentric Margaret Rutherford was in the earlier movies nor the outwardly dowdy and prim, inwardly shrewd and observant character Hickson played on Miss Marple. One gets the sense that Angela Lansbury's Jessica Fletcher wasn't all that far removed from the person she really is: kind-hearted and generous, an intellectually dignified older lady.

Perhaps remembering another NBC Mystery Movie series, The Snoop Sisters (with Helen Hayes and Mildred Natwick), Levinson and Link first sought the services of Jean Stapleton, who had recently left All in the Family/Archie Bunker's Place in 1979, but she turned them down, as did Doris Day, whose career was largely on hold due to a decade-long legal battle with her former, crooked business manager, though Day did briefly host a talk show during Murder, She Wrote's run. Reportedly Lansbury had been their first choice all along but Link and Levinson wrongly assumed they couldn't get the busy film and Broadway star.

Lansbury's character is a retired English teacher who unexpectedly becomes a best-selling murder-mystery writer over the course of the series' pilot episode. (Her publisher is played by perennial good-guy-who-turns-out-to-be-a-killer Arthur Hill, so one can anticipate where that pilot episode is heading.) She's a widower living in a big house in Cabot Cove, Maine, a classically New England coastal village. (Location scenes, however, were actually filmed in Mendocino, California.) In the early shows I watched Jessica frequently reference her never-seen late husband and clearly she misses him.

The show's longevity had the unanticipated effect of making Cabot Cove the murder capital of the world. One amusing study determined a murder rate of 1,420 per million, higher than real-world record holder Honduras. Fortunately, Jessica's success as a writer allows her to travel to other parts of the country (no doubt to the relief of Cabot Cove's residents) and later the series moved her to New York.

The other thing attracting this reviewer to Murder, She Wrote: The Complete Series is that the show became rather famous as a kind of graveyard for aging movie stars of the 1930s-‘50s and veteran character actors of television's Golden Age, some struggling to find work by the mid-1980s. The show's popularity and Lansbury herself attracted not just actresses like Julie Adams and Anne Francis, who in their middle age made a career busily bouncing from one hour drama series to another, but also fairly big movie stars, many who had worked with Lansbury when she had been an ingénue at MGM during the 1940s.

When such things were much rarer now than they were back then, Murder, She Wrote did a crossover episode with another hit CBS show, Magnum, P.I. The story begins there as "Novel Connection" and concludes on Murder, She Wrote as "Magnum on Ice." The Magnum episode is also included here.

Future stars like George Clooney, Andy Garcia, Joaquin Phoenix, Neil Patrick Harris, Julianna Margulies, Cynthia Nixon and others got early breaks on Murder, She Wrote, and Wikipedia helpfully notes that over the course of the series' run virtually the entire casts of both M*A*S*H and WKRP in Cincinnati put in appearances, albeit not together.

M*A*S*H veteran Harry Morgan appears in one of the most interesting Murder, She Wrote episodes, "The Days Dwindle Down." That show features Morgan, Martha Scott, and Jeffrey Lynn, who all also appear in 40-year-old flashback scenes derived via stock footage from the 1949 film Strange Bargain.

One of the great attributes of Ellery Queen and the howdunnit Columbo is that both series played fair with their audiences. The investigations and their resolutions were logical and featured dénouements attentive audiences could actually anticipate. Murder, She Wrote doesn't operate quite as fairly though neither does it cheat mystery fans as so many shows of its kind frequently did.

Murder, She Wrote was released in single-season sets during 2005-2010. This less expensive overall Complete Series set thankfully dispenses with Universal's notoriously unreliable "flipper" discs, DVD-18s that infamously and repeatedly jammed, though Universal never publicly acknowledged the many problems with this technology, let alone offered replacement discs to consumers. The first and possibly several subsequent seasons of Murder, She Wrote were released that way but are single-sided discs throughout here. The full-frame shows look pretty good; the series was shot throughout its run on 35mm film, and not the finished-on-tape postproduction method that's limited the viability of many ‘80s and ‘90s series in this high-def age we now reside. The region one discs, covering 212-plus hours (!) include English and French Dolby Digital 2.0 mono audio, with optional English, English SDH, French, and Spanish subtitle options. The later post-series TV movies are not included, incidentally.

Supplements include previously released featurettes ported over here, including "The Great ‘80s Flashback," "Origin of a Series," "Recipe of a Hit," "America's Top Sleuths," and "The Perils of Success," as well as the aforementioned Magnum P.I. crossover episode.

Fondly remembered, Murder, She Wrote is a not-quite-great series that's nonetheless a lot of fun for its star, high production values, and top-tier marathon of familiar and famous guest stars. Highly Recommended.