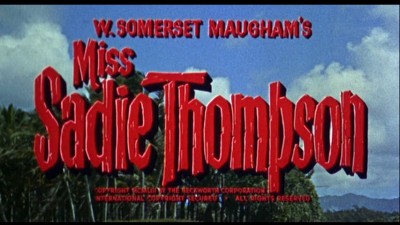 Part of Rita Hayworth's comeback following a brief hiatus, Miss Sadie Thompson attempts to recapture the actress' sultry Gilda image while also presumably giving her an outlet to vent some of her frustration over the public scrutiny given to her lovelife, including her failed marriage to Aly Kahn. Based on a novel by W. Somerset Maugham and directed by Curtis Bernhardt, known for his dramas with Barbara Stanwyck and Joan Crawford, Miss Sadie Thompson is a challenging morality play that builds a lot of steam but then releases it in all the wrong ways.

Hayworth plays Sadie, a woman of the world who lands on a remote port in American Samoa. There she befriends the Marines stationed on the U.S. base, who haven't seen a woman from the mainland in a long time. One horny sergeant in particular, O'Hara (Aldo Ray, God's Little Acre), takes a real liking to Sadie, working overtime to fend off his rivals. His true enemy comes from without, however, in the form of Alfred Davidson (Jose Ferrer, The Caine Mutiny), a crusading missionary who seeks to regulate morality on the island. He remembers Sadie from a police raid in Honolulu and believes her to be a prostitute on the run from the law. He'd rather she face the music than dance to it.

Sadie does get away with plenty of the latter before the hand of judgment smacks her down. There are several musical numbers in Miss Sadie Thompson. The two most prominent of them are designed to show the opposing sides of Hayworth and her character. The sexy barroom come-on "The Heat is On!" is performed as a gyrating burlesque routine by Hayworth (dubbed by Jo Ann Greer), and it caused quite the scandal thanks to Rita's hip action (pre-Elvis, no less). Yet, Sadie is a woman who we need to believe can be redeemed, and so she also sings "Hear No Evil, See No Evil" to a gaggle of admiring island children. Whatever hard life she has lived, there's still some softness in her.

Though banned for its salaciousness in many places upon its release, possibly more for its eventual vindication of Sadie and refutation of Davidson's unyielding dogma, Miss Sadie Thompson's fires have cooled in the intervening decades. Rita Hayworth is still sexy, be it 1953 or 2013, but the film itself is missing any genuine lust. Aldo Ray is too earnest, and the lack of direct contact between the would-be lovers means all the sweat is generated by the tropical climate alone. Ferrer likewise overplays his hand, meaning all the male characters end up being one-note characters, leaving the leading lady to struggle to find any nuance all on her own. They are a drag to watch, and Hayworth is constantly trying to pull our attentions the right way, but it's not enough now that the script's shock value has mostly faded.

The only thing that remains shocking, actually, may be even more disarming to modern eyes than it was back in the 1950s. The climax of the story is quite bleak. Sadie's decision to do the right thing invites a brutal reaction, and it caught me by surprise. Its heaviness is not helped by how quickly Bernhardt wraps things up. There's little time to process what happened, making the final shot of Sadie sailing toward a sunny horizon come off as both puzzling and disingenuous. 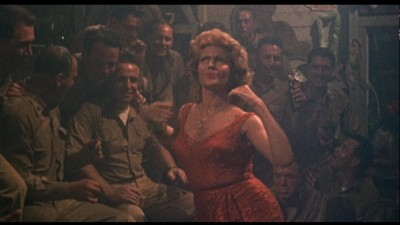 Video:
Miss Sadie Thompson has come to DVD as part of the Sony Choice Collection, a manufacture-on-demand imprint. The widescreen picture looks all right, with a mostly clean surface area free of scratches, dirt, or jumpy cuts. The color is, however, very faded, and the picture is hazy and overly grainy. The vivid Technicolor photography of Charles Lawton Jr., who also shot Rita Hayworth in Lady from Shanghai, has been severely dulled by age and neglect.

Sound:
The mono mix of the original soundtrack is solid, with decent tones and little by way of distortion. Dialogue is really clear and there are no noticeable dropouts. Music is a bit dialled down, but not too badly. 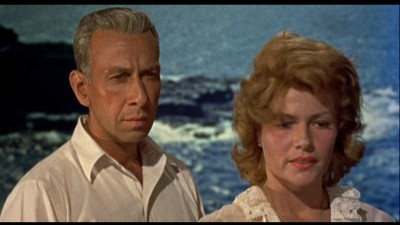 Extras:
A short video introduction by actress Patricia Clarkson (The Station Agent) gives a fair amount of context for the movie. No other extras are included.

FINAL THOUGHTS:
Recommended. Though its temperature has cooled over the decades, the sweat-soaked love affair of Miss Sadie Thompson still serves as an entertaining vehicle for its star, Rita Hayworth. The actress delivers a mature, world-weary performance as the title character, a woman of ill-repute trying to outrun her past and head for sunnier climes. Aldo Ray and Jose Ferrer play her love interest and a moralistic missionary, respectively, and both prove to be stuffed shirts, but Hayworth is always scintillating to watch. Be prepared, though, the ending is harsh and disjointed and may leave you feeling a little queasy. 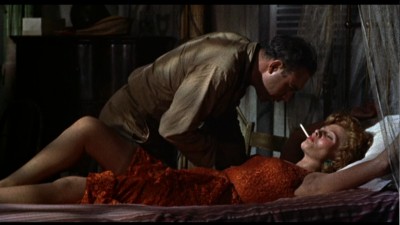