I've often joked that almost any movie would be best as a musical. No matter what the story is about or what happens in it, there's always room for a big song-and-dance number or an emotional solo performance from a key character, all you need is a composer talented enough to come up with the right songs. I'm sure when Charles Dickens wrote his immortal tale of poverty and homeless children "Oliver Twist" in 1838, the last thing on his mind was to have it become a musical, but Lionel Bart did just that with "Oliver!" premiering it on stage in 1960 followed in 1968 by this lively film version. (In fact, hearing the movie's soundtrack record was my first exposure to the story.) 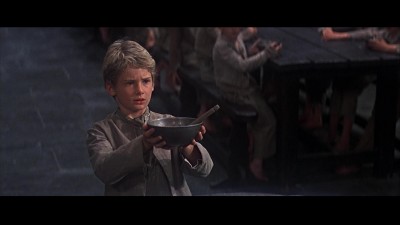 Noted in the opening credits as "Freely adapted from Charles Dickens' Oliver Twist," Oliver! stars Mark Lester in the title role. All his life he's lived in an orphanage that's really a front for child labor, where everyone is treated like slaves and only fed gruel for their troubles while the people who run the place have much nicer dinners. Still the kids are taught to be thankful for what they get, as they show in the opening number "Food, Glorious Food!" (Useless bit of information- this song was used in a 1987 TV commercial as "Cheese, Glorious Cheese" for the National Dairy Board.) The kids at Oliver's table that day draw straws to go ask Mr. Bumble (Harry Secombe), the head of the operation, for a second helping of gruel to split up and poor Oliver picks the longest one. He meekly approaches Bumble holding his bowl out, delivering the iconic line unchanged from the original novel and prior movie adaptations, "Please sir, I want some more." Apparently no child had ever had the audacity to make this request before, and Bumble is so furious he first delivers a musical number with the title song with the other kids joining in, then takes him out on the street offering him for sale through another song ("Boy for Sale"). An undertaker and his family take him up on the offer, but Oliver is sent to the basement after the undertaker's son insults his mother. He manages to escape however and runs off to London, where he meets Jack Dawkins, better known as the Artful Dodger (played by Jack Wild here as well as in the original London stage production. He's probably best known to Americans as Jimmy on the TV series HR Pufnstuf and subsequent movie.) 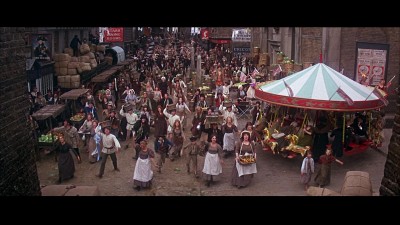 The Artful Dodger is an orphan himself, but has found a family in Fagin's (Ron Moody) operation, where he gives homeless boys room and board in exchange for going out and stealing things for him as he explains in my favorite song here, "You've Got to Pick a Pocket or Two" after the Dodger brings Oliver back with him. Fagin's partner in crime is Bill Sikes (Oliver Reed, nephew of director Carol Reed), who isn't quite as nice to the kids as Fagin is but his girlfriend Nancy (Shani Wallis) is well-liked by them, as expressed in the song "I'd Do Anything." Will Oliver be content to stay in this situation, or is there still a real family out there for him?

Oliver! won 1968's Best Picture Oscar over some heavy competition. It's a very immaculate production- although all of it was shot at England's Shepperton Studios, the sets of 19th century London streets and buildings are so authentic that even a few locals swore they recognized parts of the actual city as filming locations. Despite the story's rather dismal situations, most of the songs are bright and uplifting, with lots of well-choreographed dance numbers as well with even the elderly Fagin showing some impressive moves. "Consider Yourself," the signature number where the Artful Dodger invites Oliver into his world, runs through a large section of London with what looks like a cast of thousands providing back-up vocals and dancing. This might not have beem what Charles Dickens had in mind, but it certainly works.

Twilight Time has released Oliver! on Blu-Ray disc under license from Sony Pictures in a limited edition available only through mail-order, but this is a rather interesting situation as Sony has released the movie themselves in other countries (but still not region-coded). 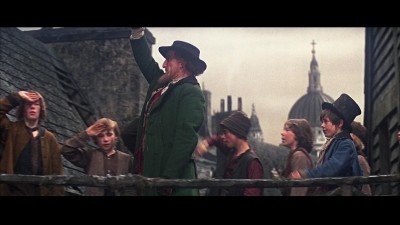 The AVC-encoded high-definition transfer is said to be the same used on Sony's international release. Presented at 2.35, it looks faithful to an original film print with grain left intact and no obvious edge enhancement or noise reduction. The movie's color scheme is rather drab in keeping with the atmosphere of the story, but the songs make up for that.

I compared this Blu-Ray to the standard DVD released by Sony in 1998 - while that disc was very good for its time, the Blu-Ray delivers much more detail and the film source appears to be cleaner. One difference between both the DVD and Sony's import Blu-Ray that will be of interest to purists is that the overture, intermission and exit music are presented here on a black screen rather than with video-based title cards, as well as the movie's original "Intermission" tag. 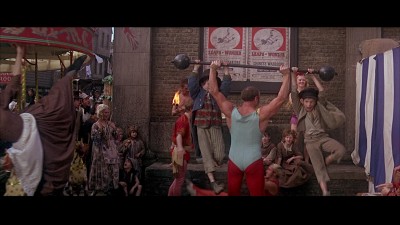 Released before the advent of optical stereo on film prints, Oliver! was shown in suitably-equipped theaters with either 70mm or 35mm magnetic sound. The audio on the Blu-Ray is encoded in 5.1 DTS-HD Master Audio, though it appears to be a 4-channel mix with a single surround channel. Most of the sound is kept up front, with dialogue and vocals panned left to right and the surrounds mostly used for the sounds of passers-by in crowded street scenes and for the chorus of vocals concluding "Consider Yourself." The sound is very clean, but at a rather low level requiring the volume to be turned up higher than normal. The singing voice of Oliver himself, which was actually provided by Kathe Green, daughter of musical supervisor John Green, still has that odd quality about it which has been present all the way back to the original LP.

SDH subtitles are included which are positioned across the screen in the same manner as traditional closed-captions. 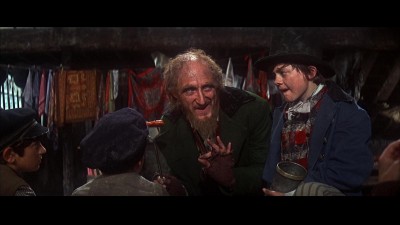 A 4-channel isolated score track is included with the movie, which still retains vocals during songs and any sound effects. Sound effects are also present during dialogue scenes that include music score, although the dialogue has been removed. The track is silent during portions with no music.

A 1968 behind-the-scenes piece from a series titled "The Moviemakers" is included, which shows some conceptual models of sets during pre-production and a good look at the camera crew during the "Consider Yourself" number. This is presented in 16x9 standard definition with color a bit faded. This was also included on the DVD release in 4x3, comparing the two shows more picture on the top and bottom of the DVD. The pre-release theatrical trailer, with some cool-looking 60s graphics, is also included in high definition (the trailer on the DVD was done after the movie received its Academy Awards.)

The remaining extras are all dated 2007 and copyrighted by Sony Pictures Home Entertainment. "Meeting Oliver!" features an older Mark Lester reminiscing about the production. Although he had a few more film roles after Oliver! including 1971's Melody with Jack Wild, he now performs acupuncture in England. "Meeting Fagin" is a similar piece with Ron Moody, where he tells us that on the first day of shooting he wasn't sure if he had actually been cast yet and was afraid of losing the role at the slightest slip-up.

Typical of other "family" releases, we get a few sing and dance-alongs. The songs Food Glorious Food, Consider Yourself, Pick and Pocket or Two, I'd Do Anything, Be Back Soon, Who Will Buy, Reviewing the Situation, and Oom-pah-pah are repeated with the lyrics onscreen highlighted as they're sung as is done in karaoke videos. Although these are encoded in 1080i hi-def, the movie footage is obviously the older standard-definition transfer with the overlaid text and graphics in HD. Dance-alongs for Be Back Soon, Food Glorious Food and I'd Do Anything show an uncredited woman explaining dance moves for these songs against a CG background of a tavern with the corresponding movie scene appearing to be projected onto a hanging sheet, and they're then repeated as a split-screen with movie footage on the left, the dancer in a box on the right, and lyrics onscreen.

There's also a "Twilight Time Catalogue," a series of still-frames showing the covers for all the company's releases thus far with "Sold Out" banners across those which are no longer available. The disc comes with a booklet that includes well-written liner notes by Julie Kirgo, who analyzes the movie and puts it into the context of the time of when it was first released. 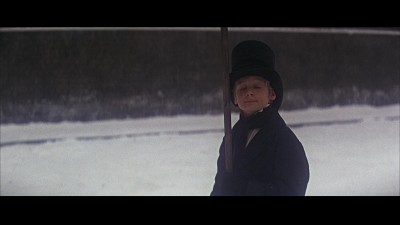 Oliver! is essential for anyone who loves musicals, and the presentation on this Blu-Ray makes it look and sound better than ever before. I just find it a bit curious that Sony found it worthy of release in other countries with extras it produced, but opted to let Twilight Time have it over here. It would be a shame if the allotted 3000 copies turns out to not be enough for those who want this on Blu-Ray, though Sony's edition is still easy to order and indicates on the back cover as not being region-locked. I'd urge all fans to order this right away, and hopefully show enough demand for other movies of this type to receive a more wide-spread release. 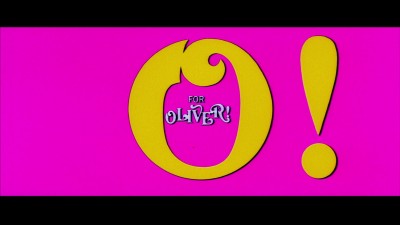