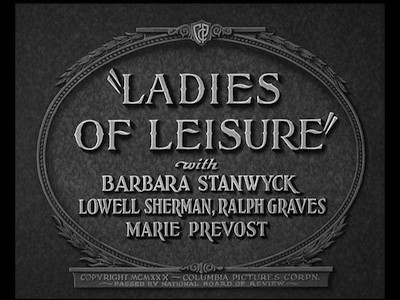 An early effort from director Frank Capra, Ladies of Leisure was adapted by Capra and Jo Swerling in 1930 from a popular play. Barbara Stanwyck leads a fine cast, including comedic supporting actors Lowell Sherman and Marie Provost, playing a prissy playboy and a sassy gal pal, respectively.

Stanwyck stars as Kay Arnold, a professional party girl who is rescued from a bad night by amateur party pooper Jerry Strong (Ralph Graves). Jerry is the son of a wealthy railroad man who is trying to buck the family business and become a painter. He hires Kay to be his model with the goal of capturing the hopeful look he saw on her face the night he picked her up. For Kay, this is a stroke of good luck, as steady employment will keep her out of trouble, but the streetwise gal has a hard time replicating the naive optimism Jerry is looking for. Plus, she feels increasingly hopeless as she begins to fall for the artist. He's already engaged to a woman more fitting his social standing.

A pre-code picture, Ladies of Leisure tackles some fairly scandalous subjects. Kay's initial career is basically being a paid escort, though the script frames both her and her roommate Dot (Prevost) as modern independents looking to get by on their own. One of the more fascinating scenes comes mid-movie when, hoping to catch Jerry's attention, Kay attempts to prove she's capable of more domestic duties, donning an apron to fry some eggs and play the wife. His failure to notice her efforts is heartbreaking. The actress was an expert at playing women with moxy whose gumption often masked true vulnerability. Kay is basically an early version of the grifter Stanwyck later portrayed in The Lady Eve, though without Preston Sturges' whip-smart writing.

Ladies of Leisure is an imperfect affair. Pacing is a big problem. Long chunks of the movie are dragged down by an awkward stiffness. Capra's direction seems stuck somewhere between the traditional stage and silent pictures, he hasn't yet mastered the art of the talkies. Luckily, there is plenty of comic relief from Prevost and Sherman that gooses proceedings back to life. There are also some surprisingly dark twists in the final act, when Kay is convinced that she really is bad for Jerry and makes increasingly drastic choices to free him from her and then liberate herself from her own bad decisions. There is an excellent tension building to the finale, even if the very end feels tacked on rather than organic. 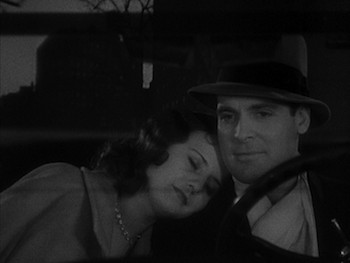 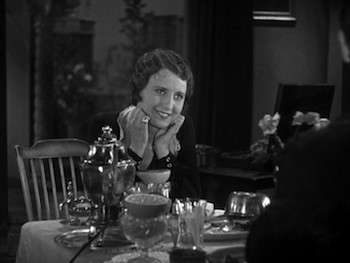 Video:
Released via the Sony Choice Collection manufacture-on-demand boutique label, Ladies of Leisure is shown at a full-frame aspect ratio in black-and-white. The image quality is fair, with a clean print used to make the disc. Resolution is a little soft, though, and there is some grainy patches.

Sound:
The original soundtrack is remixed and cleaned up, with no noticeable audio problems except for some minor hiss in a few of the more silent scenes

FINAL THOUGHTS:
Though not amongst Frank Capra's best, the 1930 romantic comedy Ladies of Leisure is a pleasantly enjoyable early vehicle for Barbara Stanwyck. She is a bright spot in a somewhat tepid script, already developing her persona as a tough gal ready to make tough choices, both in life and in matters of the heart. An excellent supporting cast helps keep the film alive, even as the story starts to clunk a little. Recommended. 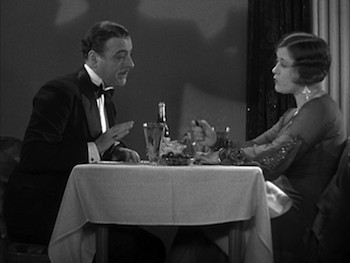 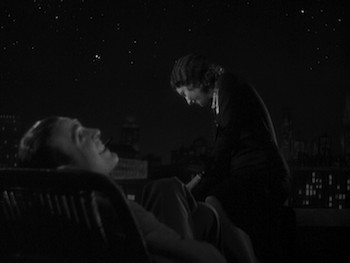