Slipper and the Rose - The Story Of Cinderella, The

Inception Media Group // G // November 19, 2013
List Price: $29.98 [Buy now and save at Amazon]
Review by Stuart Galbraith IV | posted November 25, 2013 | E-mail the Author
A real anomaly, The Slipper and the Rose - The Story of Cinderella (1976) is a big budget British musical, made during a time when the British film industry was all but collapsing, and large-scale musicals were all but regarded as box office poison. Executive produced by David Frost, with songs by Robert B. and Richard M. Sherman (Mary Poppins, Chitty Chitty Bang Bang), and featuring an excellent cast of mostly British actors, the film was not a success outside of England, though it's been readapted and revived numerous times for the stage.

The picture has been released numerous times on DVD in the U.K. and in America, though apparently all earlier versions were either 4:3 panned-and-scanned from its original 2.35:1 Panavision, or cropped to 1.78:1 full-frame (for widescreen TVs). This new release, courtesy Inception Media Group and B2MP, is positively glorious. Not only is the film finally presented in its original theatrical aspect ratio, the 1080p high-def image is impressively sharp with exceptionally good color. It appears cinematographer Tony Imi experimented with the lighting and/or lab work, giving familiar spectacles like the story's royal ball a uniquely captivating look. Further, the disc seems to be porting over older but still interesting supplements featuring director Bryan Forbes and the Sherman Bros. Robert Sherman died in March 2012 and Forbes earlier this year, making their archived comments particularly invaluable. 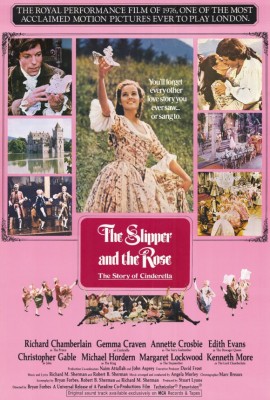 The Slipper and the Rose is less a children's film as many of the songs gently satirize royal politicking and class structure, while emphasizing the romance between Price Edward (Richard Chamberlain) and Cinderella (Gemma Craven, Pennies from Heaven) a bit more. The longish film (143 minutes) tacks on a new act at the end that tests the audience's patience but also gives the film the dramatic lift it could have used more of earlier.

Of course, The Slipper and the Rose came not only after Walt Disney's famous 1950 animated feature, but more importantly the Richard Rodgers and Oscar Hammerstein II Cinderella, first performed as a prime time television special in 1957, starring Julie Andrews. It was soon adapted from the TV version to the stage as well, initially at the London Coliseum in 1958, and a nearly equally famous revival followed in 1965 with Lesley Ann Warren . The most recent version is currently running on Broadway. The Slipper and the Rose's anticlimactic climax was an obvious effort to distinguish it from these other, familiar versions.

As in most other adaptations, the Prince is under pressure from his parents, the King (Michael Hordern) and Queen (Lally Bowers) to marry for the sake of regional stability and to ensure an heir to the throne, but he wants to marry for love. Cinderella, meanwhile, her father having died, is condemned to the life of a lowly servant by her evil stepmother (Margaret Lockwood, Hitchcock's The Lady Vanishes), the wicked woman devoted instead to the upward mobility of her own vain and grotesque daughters, Isobella (Rosalind Ayres) and Palatine (Sherrie Hewson).

When the King and Queen, aided by the Lord High Chamberlain (Kenneth More), stage a ball for prospective brides, Cinderella is left in the lurch, but her magical Fairy Godmother (Annette Crosbie) comes to her rescue.

The Slipper and the Rose follows the familiar course of other Cinderella stories. But where most versions end happily with the elusive "Princess Incognito" found after she tries on that famous glass slipper, at this point The Slipper and the Rose has a good half-hour left to go. Here, the King and Queen reluctantly refuse to bless the proposed marriage on the grounds that more urgent alliances are needed to avoid war.

(Spoilers) In the film's best scene, wonderfully played by the irreplaceable More, the Lord High Chamberlain sadly conveys the news to Cinderella, and she steals off into the night with a dowry provided her. In exile, singing "I Can't Forget the Melody," in a shot directly copying Jean-Honore Fragonard's painting The Swing, Cinderella's Fairy Godmother reappears, and the result is that Cinderella, wedding gown and all, simply crashes the Prince's arranged royal wedding. The intended bride faints, everyone is shocked, but more or less shrug and surrender to the inevitable and the two lovers are wed. I hope this didn't inspire desperate, real-life imitators.

It's all rather anticlimactic, but Hordern and especially More are very good in these scenes, adding some genuine emotional conflict to an otherwise frothy, beautifully shot but generally lightweight musical.

Except for the tacked-on final act, the screenplay by the Sherman Bros., Forbes and, reportedly, an uncredited assist from Frost, is unexceptional but occasionally witty. In some respects they seem more interested in making the royal court appear foolish, with Hordern always dependable playing doddering figures of authority, and ancient Edith Evans adding to the fun as the Dowager Queen, at 87 singing and dancing in her penultimate role.

The songs are pleasant and mostly good, appropriate to the situations but not as iconic as, say, a half-dozen or so songs from Mary Poppins. The underrated Richard Chamberlain is in fine form singing "Why Can't I Be Two People?" while "Protocoligorically Correct," "The Slipper and the Rose Waltz," "I Can't Forget the Melody," and "Position and Positioning" are all fine.

The interiors were mostly lavish sets built at Pinewood, while exteriors where shot on location in Austria. Toni Imi, whose list of credits include everything from That's Carry On to ffolkes to the George C. Scott A Christmas Carol and the sci-fi epic Enemy Mine, really seems to have found his groove with The Slipper and the Rose. The aforementioned royal ball scenes are uniquely beautiful and by themselves make the film worth watching. Partly the lighting serves Julie Harris's (not the actress) costume designs, partly it may be a use of filters or even tweaking the lab work, but the results are subtly stylized burnt pinks, reds and oranges, almost like the look of early 2-color Technicolor at its best. But the entire picture is beautifully photographed and one of its main attractions.

Filmed in Panavision, The Slipper and the Rose looks stupendously good on Blu-ray, among the best looking anamorphic ‘scope titles I've seen to date. It might just as well be a new production, so flawless are the film elements and its transfer, with extremely rich color, strong contrast and blacks, and good detail visible throughout, even in its title elements. The 5.1 DTS-HD Master Audio is a bit less wonderful. The surround channels get a decent workout but it's all on the thin side. A 2.0 PCM Stereo track is also available. No subtitle options and the disc is Region "A" encoded.

The supplements apparently consist entirely of material ported over from an earlier DVD release. They include an audio commentary track with director (and former actor) Bryan Forbes; a half-hour vintage making-of documentary that probably aired on network television, slotted after prime-time movie airings; a newer featurette with the Sherman Bros. discussing their work on the picture; and a trailer, in high-def.

Though not a great success when it was new, The Slipper and the Rose - The Story of Cinderella has through the years become a cult favorite, positively beloved by some who appreciate its many qualities and forgive its handful of shortcomings. It's the kind of film one can imagine finding a whole new audience via this splendiferous high-def transfer, and thus is Highly Recommended.